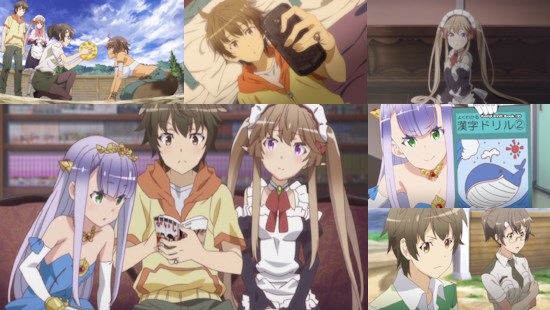 The "trapped in a video game/alternate universe/fantasy world" concept is a well-worn one in anime at this point, and it's a concept that has had varying results if we're quite honest. This month sees another contender reach the UK in the form of Outbreak Company - can it carve out a position for itself within this crowded marketplace?

When shut-in Shinichi Kano applies to a mysterious job advertisement seeking hardcore otaku like himself, he expects nothing to come of it and is surprised to find himself invited for a face-to-face interview. This is as of nothing compared to the surprise in store during that interview itself, as Shinichi is drugged and awakens in a location very different from anything he's seen before.

Not that Shinichi is exactly complaining, as his first sight upon waking is an attractive young girl dressed as a maid. This is no Akihabara attraction however, and Myucel (for that is her name) is the real deal - an actual working maid. Oh, and she's also half-elf; a prospect which sends our protagonist's excitement into the stratosphere.

As it turns out, Shinichi has been transported to another dimension, and more specifically the Holy Eldant Empire - a world happened upon by Japan's Self-Defence Force via a wormhole of sorts, and a land which the government now want to leverage trade relations with in the name of boosting their economy. This is where Shinichi himself comes into the equation, for he has been tasked with spearheading Japan's "soft power" by introducing Eldant's people to otaku culture in the hope that it will create an entire new market for such wares.

Of course, exciting though this prospect is it also proves to be far from a simple one - Eldant operates under a feudal system which means that much of its populace are illiterate, and those who can read and write are entirely unfamiliar with every aspect of the culture depicted in anime and manga. It's going to take all of Shinichi's smart thinking to make his mission a success, and with certain parties determined to make his attempts a failure he also has some potentially dangerous opponents to handle into the bargain.

If all of this sounds like a pre-cursor to a self-referential anime comedy, then you wouldn't be entirely wrong - Outbreak Company revels in name-checking anime, poking fun at this very show's director for some of his previous works and so on. Thankfully, this is actually pretty fun for the most part - if you're tired of series that rely on "Hey! Insert show name here!" gags then this won't be fresh enough to persuade you to change your mind, but if you're weak to a series that is willing to make some surprisingly deep cuts regarding anime, visual novels and the like then most of its comedy is pretty effective and fun to watch.

What is more surprising about Outbreak Company is what you find when you dig a little deeper beneath the surface, as the show is actually pretty thoughtful about its subject matter. In particular, the way in which the series ponders the issues of localisation and how cultural differences impact upon this is afforded an enjoyably thoughtful treatment that also knows how to leverage this angle for comedy. On a more serious note, the climax to the series also has a point to make about the concept of "soft power", serving as a reminder that it isn't necessarily as passive in political terms as you might think of it as - you could argue that the final reckoning on this topic is a cynical one, but that doesn't stop it from becoming another unique talking point that you may not expect from a series of this nature normally.

This thoughtful treatment of what would otherwise be a silly comedy presents us with flashes of smart and even touching story-telling throughout - Myucel being reduced to tears after reading a manga which reminds her of her own past is a sweet little reminder of the power of story-telling and how it can bridge the widest of cultural gaps, while an episode where Eldant Emperor Petralka (who is a loli character - of course she is) decides to become a shut-in to avoid her daily duties ends with a striking explanation of how someone might fall into the seemingly bottomless pit of retracting themselves from society.

Such a mix of referential comedy and more complex fare may sound like they'd make for uneasy bedfellows, but Outbreak Company never feels like anything other than a confident blend at any point - those more emotional moments are easily set against occurrences such as the best football game you'll ever see in an anime series (this is what happens when you let magic-wielding teenagers watch too much Captain Tsubasa, as it turns out) or watching a class learn about the history of the visual novel. It's all entertaining stuff that is very much worthy of your time.

Visually, the series isn't outstanding in any way (which makes the lack of a Blu-ray edition feel a little less disappointing) but manages to deliver everything that it needs to - its character designs are appealing, it has enough in reserve to sell its rare action scenes and its environments are knowing takes on generic fantasy RPG environments for the most part.

If you're worried about "getting" all of the references, then this DVD release handily provides plenty of on-screen translation notes to explain the jokes and what they refer to - admittedly this will strip out a layer of the humour if you didn't get the gag in the first place, but at least it saves you rushing off to Wikipedia every two minutes or sitting there feeling stupid for missing the joke. There are a few typos here and there, and our review copy suffered one audio-video glitch during episode eleven, but otherwise everything works as advertised here. Finally, the English dub exhibited here is pretty good, with all of the energy and passion required of it in terms of coming close to matching its original treatment.

Outbreak Company is a series that could so readily have taken the easy way out by leaning on its basic storyline and using it to launch a raft of never-ending gags that would have gotten old fast. It's to the show's credit that it has so many more strings to its bow - it's actually thought about its scenario, the reasons behind its existence and the consequences of actions taken and forces in play. This grants the series a heartfelt feel which makes for a far, far better viewing experience as a result - a series that proves itself to "get" otaku culture in ways beyond throwing around the names of popular anime or manga by showing an innate understanding of this culture and the powers behind it. Don't get us wrong, there are still plenty of formulaic undertones to the series and the way it handles itself, but that shouldn't belittle the power of parts of its message and the overall effect this has in creating a series that can be watched and appreciated as more than just a simple comedy.

7
A fun otaku comedy that has plenty more to say if you want to dig beneath the surface.
LATEST REVIEWS