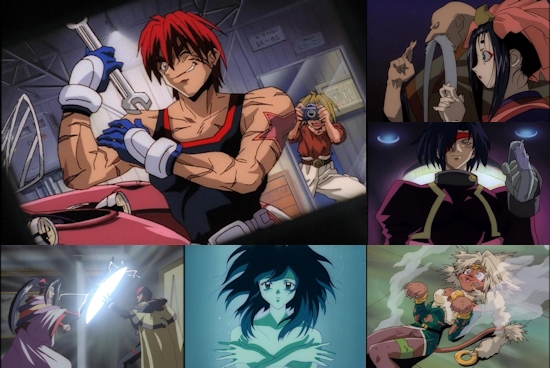 Talk to any anime fan about a series that best encapsulates space-faring adventures within the medium, and Cowboy Bebop is inevitably going to be the first series that leaves most fan's lips. However, 1998 actually saw animation studio Sunrise produce another sci-fi "space western" which actually predates Bebop by a matter of months - Outlaw Star. This series has already been made available on DVD in the UK via Beez Entertainment before their disappearance from the scene, but the series has now been rescued by Anime Limited and given a shiny new remastered DVD treatment.

Based on a manga by Takehito Ito, Outlaw Star quickly introduces us to Gene Starwind - something of a badass with a burgeoning reputation on his home planet of Sentinel III, and a man with a dream of leaving his home planet to venture into space as a pirate hunter. There is, however, one small fly in this ointment, that being that a traumatic childhood experience revolving around his father has felt Gene feeling rather uncomfortable when it comes to space travel; in fact, he hasn't ventured out into the big, wide universe ever since.

Whether he likes it or not all of this is about to change, as Gene and his diminutive business partner James Hawking (aka Jim) find themselves working a job for an outlaw named Hilda, in a series of events which seems them embroiled in an attack by pirates revolving around a naked girl in a briefcase. When Hilda's efforts to discover the so-called Galactic Leyline meets a tragic end, it's Gene and Jim who unexpectedly find themselves taking on her role as an outlaw in an adventure that sees them obtaining one of the best ships in the galaxy and a growing crew of powerful misfits. Of course, searching for the Galactic Leyline is all well and good, but first and foremost the crew of the Outlaw Star - as their craft becomes known - need to worry about their finances; space travel might be easy in this universe, but it certainly isn't cheap.

Thus the scene is set for what Outlaw Star is all about - yes, it always has its ultimate goal in mind, but it certainly isn't averse to providing what prove to be largely entertaining stand-alone episodes as Gene and company fret about their financial situation, which usually leads them into some daft or dangerous (or both) situations as they look to cash in favours or take on jobs that nobody else will touch. The sense of place and purpose created from having to worry about repair bills and parking fees is something that runs throughout the show to good effect - for all of its crazy spacecraft designs and pitched battles, everything in this universe has a real impact from food supplies being ruined having not been strapped down before making some evasive manoeuvres through to the difficulties of drying your laundry in a spaceship. These moments are small and insignificant in the grand scheme of Outlaw Star's narrative, but they work wonders in making the series feel "alive".

Although Outlaw Star's main story serves it in good stead, the story as a whole is far more about its journey than its ultimate goal - indeed, it takes some decidedly forced twists and turns to keep the show moving towards its final destination, and the real joy of the series comes from watching its cast of characters bounce off of one another with an aim towards achieving whatever individual or collective goals have been set in front of them at any given point in time. To this end, Gene and Jim's partnership works well throughout (even if the former's mood swings at times seem to come entirely from leftfield), assassin Suzuka's addition is one of those forced twists we mentioned that makes little real sense but doesn't matter too much because she kicks ass, and Ctarl-Ctarl alien cat-girl Aisha Clanclan is perhaps one of the best comic relief characters to grace an anime series.

The show's potential to break out into a variety of episodic fare alongside its main story allows it to creatively blend together its elements, meaning that it can shift from comedy (including the best hot springs episodes we've ever seen) to drama at the drop of a hat at ease, and at times it even manages to be quite touching (one late episode revolving around Jim in particular is masterfully handled). Throw in some fantastic action scenes comprising of ship-borne space battles and more traditional combat in a world which mixes cybernetics, science and Tao magic, and there's something for everyone on show here. In a way, it's sometimes Outlaw Star's "big picture" that is the least entertaining aspect of the series, although it never drags its heels at any point which leaves the show to be almost perfectly-paced throughout.

In terms of animation quality, Outlaw Star can be a mixed bag but thankfully its visuals are a strong point far more often than they're weak - scenes can look sloppily drawn or animated here and there, but you'll find your eyes glued to the screen on account of impressive moments far more often thanks to a large number of wonderfully fluid action scenes in particular which can border on the downright beautiful. All of this is helped along by a colourful visual treatment and no shortage of great character and spacecraft designs which are unceasingly a joy to behold.

While I personally haven't seen Outlaw Star before and so can't comment on how this remastered edition compares to any prior DVD releases, I can say that this Anime Limited edition of the series looks stunning - while it wouldn't quite be true to say that it can match Blu-Ray quality when upscaled it really doesn't feel far off, with a crisp, clear and colourful transfer that - with the exception of a few very rare scenes which don't seem to have remastered particularly well - is superb throughout. It's a shame, then, that the menus across these four DVDs look decidedly cheap and cheerful in comparison, with an ugly font choice and choice of background art that suggests that they there weren't many art assets available to choose from. All of the menus are fully functional and serve their purpose, but they really don't look very professional so it's a relief that you won't be spending very much time in them.

Audio quality is also good here, with no complaints - the Japanese language option is by far the preferable viewing experience here however, as much of the English dub feels "phoned in", with lifeless performance that sound like a script being read with little real passion that tends to kill the atmosphere of the series somewhat. If you are plumping for the Japanese audio, this release has great subtitles with only a few minor errors scattered here and there without any show-stopping issues, so all in all this remastered release gets a definite thumbs-up for its overall quality.

It may be destined to forever live in the shadow of Cowboy Bebop - and in a number of ways it's not fair to even compare the two - but make no mistake that Outlaw Star is a tremendously fun viewing experience. This remastered edition of the story looks almost exclusively gorgeous, and even if its story isn't the most memorable you'll find in the genre the show's universe and cast of characters are more than sufficiently compelling to make Gene Starwind and company's journey one that is absolutely worth watching. They don't make space-faring anime like they did back in the 1990s, and Outlaw Star is another capable reminder of that halcyon era.

8
A hugely entertaining space-faring adventure that builds a compelling world and a great cast, and looks excellent to boot.
COMMENT AND DISCUSS
blog comments powered by Disqus