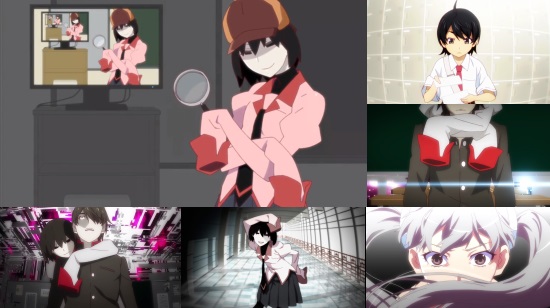 It may be February but the year can now officially be said to have begun, as it's Monogatari time in the UK with the release of Owarimonogatari from MVM Entertainment. The big question this time around though is how well the show will stand up in light of the fact that Kizumonogatari has screened over here since the last entry to hit the UK? Clearly it’s not a fair comparison but it’s still one that will inevitably be made...

So, first of all the answer to the big question that everyone will want to know - Owarimonogatari is set after Nekomonogatari White but before Tsukimonogatari (as near as anyone can tell anyway – if Nisio Isin has a master timeline anywhere he’s not sharing) so Araragi et are all still in school but Nadeko has not yet had her little breakdown.

Like Kabukimonogatari before it, Owarimonogatari is a little misleading in terms of what it’s actually about. Whilst it certainly makes all the right signals that this will finally be the arc where we find out what on earth Ougi Oshino is actually up to, she isn’t really the main player in the show nor do we learn all that much about her. Instead the focus here is on new character Sodachi Oikura, a girl from Araragi’s past that he struggles greatly to remember all that much about. With Ougi’s "help" however he’s going to have to remember it all to solve a series of mysteries in which Oikura is a key player.  Kicking off with a more literal than normal locked room mystery (Ougi and Araragi are literally locked in a room until they solve the mystery) and moving through a delicately unfolding series of reveals about the history of Oikura which becomes darker and darker throughout the arc, the story is certainly willing to pull out all the narrative stops.

The core plot lines of Owarimonogatari are undoubtedly solid and intriguing but the issue it has is that it takes a little too long to get going. The first two episode arc is the issue here as, despite the premise of Araragi and Ougi being locked in a room talking through a mystery sounding really strong, it just doesn’t really work largely because the two characters don’t really bounce off one another in the way that they need to to sustain the story. Araragi is his usual dumb-but-fun self which is like chalk and cheese compared to Ougi’s manipulative and enigmatic character. Once the second arc kicks off things do start to improve thanks to the arrival of both series favourites Hanekawa and Senjoghara, and also of Oikura herself who turns out to be a great character – angry and damaged and not afraid to show it. Once the third arc roles around Hanekawa has proven yet again that she can save almost anything as her addition to the Araragi-Ougi team-up is brilliant and provides the spark that was sorely missed from the initial arc as the series unravels a particularly nasty secret.

Visually things are unfortunately disappointing here a fair amount of the time. In full disclosure the Blu-ray version (which does look fine - Ed.) was not available for review, but on the DVD version the show looks its usual amazing self during close-ups but any time the show pulls back for a long shot the characters lose most of their definition, become very indistinct and in the worst instance during the first arc actually seem to be dissolving into the background. When the visuals do work though they are absolutely up to standard. The character design for Oikura is great (and Marina Inoue does a great job with the voice) and Ougi’s creepy character design is used really well throughout. There are also three of the franchises best opening credit sequences to be found here -the first and third in particular are really fantastic.

Unfortunately this is not top level Monogatari when viewed as a whole. Whilst it does manage to pull itself back to form by the end, the question of whether you can recommend a show where you have to make it through between two and four episodes to get to the good stuff has raised its head once again. On the whole this does end up as something I would recommend watching as once it does get going it's top-notch Monogatari (plus the second half of this series will require you to have seen this later this year). In terms of the Kizumonogatari comparison the show doesn’t even come close of course and the various visual issues on the DVD side of the equation make this even more apparent and disappointing. But, as is always the case, Hanekawa has saved the day again (get that lady a cape) and the core mystery is solid enough to keep you hooked.

7
A flawed but intriguing entry to the Monogatari franchise.
COMMENT AND DISCUSS
blog comments powered by Disqus