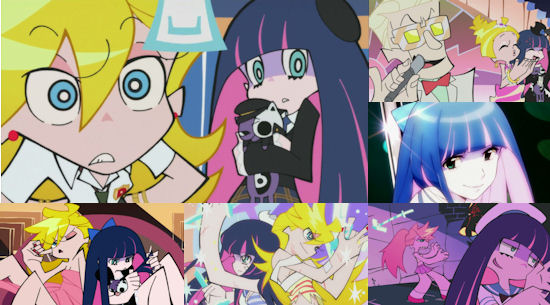 If you've ever watched those well-known classic American cartoons from the golden era of the Cartoon Network such as Powerpuff Girls and Dexter's Lab, then mere seconds into the opening episode of Panty and Stocking with Garterbelt you'll find a wave of nostalgia washing over you.  The simple character designs in a world of sharp edges and thick lines are instantly recognisable as an homage to those 1990s offerings, immediately marking out GAINAX's latest outing as something very different to any other anime series you'll see this year, let alone this autumn.  However, once you move beyond those visual similarities then any comparisons with the aforementioned series end as rather than a fun, family-friendly offering Panty and Stocking soon reveals its true colours as utter, foul-mouthed filth which has more in keeping with South Park if we're looking to continue our American cartoon comparisons.

Panty and Stocking with Garterbelt quickly introduces us to the world of Daten City, a place which exists between heaven and hell and is thus a breeding ground for "Ghosts" - entities intent on wreaking havoc whenever and wherever possible.  Tasked with protecting the city from Ghosts are two fallen angels, the Panty and Stocking of the show's title, headed up by their "boss" and man of the cloth Garterbelt.  It takes no time to realise that these two angels are anything but - Panty is a sex-obsessed and not particularly bright blonde, while Stocking proves to be as equally foul-mouthed as her sister despite her incredibly sweet tooth.

From here, we get to watch Panty and Stocking go about their business (in every sense of the word) defeating Ghosts and generally cursing, fighting and shouting up a storm, with each episode splitting itself into two "sub-episodes" to provide a duo of self-contained stories within each instalment.  Right from the get-go, the show's tone is clearly defined via two opening stories which take in a Ghost which is attacking people while they're on the toilet followed by a speed-hungry monster which somehow provides a vehicle for Panty to pack in more double entendres into ten minutes than the Carry On series of films managed in decades.

Moving forward, the series proves over and over again that nothing is sacred, with entire sub-episodes concentrating on bodily fluids or porn videos without batting an eyelid - thankfully, this does make for some truly funny comic material, not least when the series finds some time to lampoon aspects of American culture, with Hollywood movies in particular inspiring everything from the show's spoof episode names through to riffs on Saving Private Ryan and 2001: A Space Odyssey even before we reach the obvious nods to the US cartoons which inspired GAINAX's visuals.  That isn't to say that poking fun at Japanese culture is forgotten here, with the magical girl anime genre providing a transformation sequence featuring Panty and Stocking as pole dancers and every episode ending with its Ghost being blown up in cheap science-fiction movie model style.

While these moments of cultural and social satire stand out in these early episodes, sadly they tend to be too few and far between, leaving the series to lean heavily instead on its crude language and subject matter to get laughs.  This still works on occasion, but it threatens to become old very quickly indeed; take Panty's double entendres and sex obsession as a perfect example, which is already tiring before even the first episode is up.  The more of the series you watch, the more you begin to suspect that Panty and Stocking is simply a one-trick pony with only brief glimmers of hope to make you think otherwise, and unless its humour hits all the right spots for you chances are you'll find yourself wondering if you can make it through the entire series without boredom setting in.

Overall then, this opening salvo of Panty and Stocking with Garterbelt leaves me torn - I have nothing but admiration for GAINAX for risking such a drastically different visual style to stand out from the crowd (and there is some genuinely impressive animation beneath that simplistic exterior in places), and similarly I can only commend them for running with characters and a vein of humour which seems set up to almost deliberately antagonise hardcore Japanese fans; that said, at the end of the day those unique properties still don't really hold enough actual depth and content to act as anything more than a brief distraction rather than a definitively good comedy anime in its own right.  If the idea of a Japanese created, less intelligent take on South Park grabs your imagination then you might well enjoy Panty and Stocking - otherwise, its entertainment value is threatening to be rather short-lived.

6
Its visuals and subject matter are a breath of fresh air, but its comedy quickly threatens to become repetitive and stale.
COMMENT AND DISCUSS
blog comments powered by Disqus