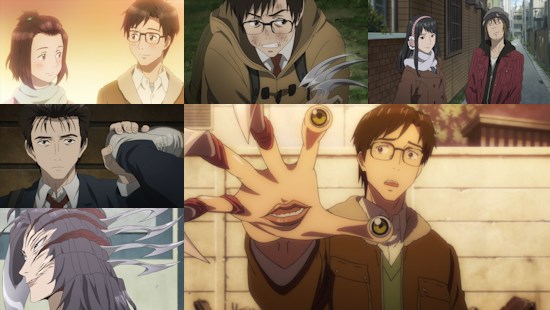 Although the popularity of zombies (be they explicitly named as such or just considered zombies by their nature) in fiction shows no sign of waning, no matter how fast or sinister you make them there's always a reassuring sense that a person on an individual level should be able to save themselves from the menace that confronts them with some smart and judicious thinking. But what if the "virus" which ravaged and took over human bodies granted them a core of cold, logical intelligence, superhuman strength and the ability to transform flesh into sharp, steel-like claws?

Welcome to the world of Parasyte, where this kind of horror becomes a reality. With news of particularly gruesome murders beginning to percolate across Japan, Shinichi Izumi is about to meet the cause for this spate of deaths - not that he knows it, as he awakens from his sleep one night to find himself being attacked by a "snake". Little does he realise that the headphones still in his ears have just saved his life, but this seems to be of little comfort as this creature instead buries into his arm. A frantic struggle later, the creature disappears - maybe it was all a dream?

The dream quickly becomes a nightmare for our protagonist, as what begins as simply pondering as to why his right arm feels a little numb turns into a frantic attempt to save a girl from being hit by a car which reveals the true extent of his problem - an alien has taken over this limb. Oh, and it's talking at him.

As you can imagine, this is quite the dilemma - to go to the authorities would be to hand himself over to experimentation and goodness knows what else, but is this creature embedded within him a danger in its own right? As events in his hometown escalate and other beings fully controlled by these alien parasites emerge, it becomes clear that Shinichi's relationship with his alien guest - Migi as he comes to be known - is a vital one to his continued survival. As the parasite menace strikes ever closer to home and those he holds dearest, Shinichi ultimately has to wrestle not only with this unfolding situation, but also questions about his own humanity as his bonds with Migi deepen out of sheer necessity.

There's no shortage of content for this first half of Parasyte to get its claws into, and the result is a heady mix - part body horror, part action series, part pondering treatise on the nature of human existence. It's a testament to the quality of both the series and its source material that it manages to juggle these balls admirably, flitting between these themes and concepts while continuing to function as a coherent whole.

A lot of this success can be put down to Parasyte's cast. Shinichi and Migi in particular lead the show as you would hope here - their literal and figurative symbiotic relationships and the ups and downs it entails powers the show through events in a brisk yet satisfying way that handles both its drama and action with aplomb. There are also plenty of characters in the wider cast that stand out in their own various ways to provide an extra element to the series, with the possible exception of love interest Murano who too often feels like she's there simply to provide that token romance rather than have any kind of believable relationship build between her and the evolving presence of Shinichi.

Meanwhile, other characters come and go in the fast-changing landscape of the series - what starts out as an "us versus them" horror series develops some interesting nuances as the parasites themselves take more than a passing interest in the lifestyle of their new hosts, bringing other elements to the show beyond its blood and guts violence as our unwelcome guests go hunting for snacks to sate their flesh-eating desires.

It's the gruesome side of Parasyte that shows the strengths of its animation - it may not look much in static shots, but in motion the grotesque parasites and the way they mangle the flesh of their hosts to suit their own ends is truly chilling, while the series never shirks away from the death and decapitation that follows in their wake (although without going to the kind of ludicrous lengths you'd see in something like Elfen Lied). Beyond these visceral moments, character designs and animation is strong and expressive, and although much of the series is workmanlike it maintains a consistency which also serves in its favour. All of this is backed up by what can best be described as a Marmite soundtrack. Personally, I love Ken Arai's score for the series in all of its bombastic wonder, but there's certainly an argument to be made that sometimes it's overbearing when set over the top of on-screen events.

While the Japanese voice cast do a great job throughout this first half of the series, the English dub is a decidedly more hit and miss affair - not even simply in terms of casting but in terms of the quality of its line reads. Most of the English cast fluctuate wildly between absolutely nailing the tone of their characters and completely dropping the ball to the point where human characters sound less energetic than their monotone parasite-controlled rivals. It's a frustrating inconsistency which can be distracting (although it's nice to see Sentai Filmworks opt for a 5.1 audio treatment), so we'd suggest sticking with the Japanese audio if you're okay with the (excellent) subtitle track. A hard of hearing subtitle track is also included, but appears to be locked to the English audio.

In terms of its overall content, this series also sees us receive a UK edition of Sentai Filmwork's Deluxe Edition, which has a nice enough rigid box but is otherwise unspectacular in its choice of content. This seems like a series that should be rich with artwork (key frames are even tantalisingly used in the next episode previews!), interviews and discussion of the original source material, but there's no artbook here - instead we get a small but arguably sweet Migi mini-figure, an unimaginative and small microfibre cloth and some temporary tattoos. At the right price this seems like a decent enough bundle of extras to add a little zest to a popular series, but at the time of writing both its RRP and online prices are some way above what we'd call a decent price for the package as it stands. Assuming they follow the US release plans, Collection 2's Deluxe Edition from Manga Animatsu should be a far more mouth-watering prospect.

Even with those lacklustre extras as part of the equation, the first half of Parasyte is most certainly an enjoyable one. Sometimes it tries too hard to shoehorn the darker side of humanity into every corner (just how many bullies does this take on Japan have?), but that doesn't detract from a well-paced and realised story packed with character and a decidedly interesting tale that still has a lot of directions to explore in its second half.

Physical extras in this Deluxe Edition consist of a Migi Be@rbrick mini-figure, a branded microfibre cloth and a set of temporary tattoos.

7
The first half of Parasyte might not quite be able to burrow into your brain, but it comes close.
LATEST REVIEWS