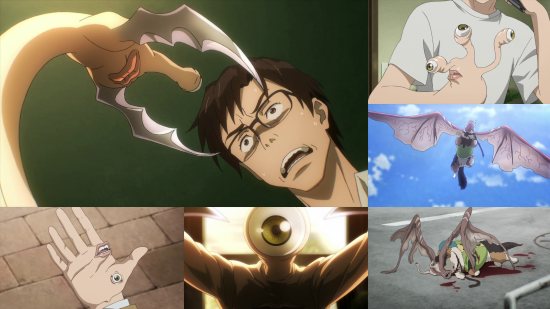 I am not lying that I gave a little jump of joy when I read that the anime adaptation of the Parasyte manga was coming to the small streaming screen. I was asked by a single person why I was so overjoyed, and the response was that it was partially due to the fact that the series offers the delicious blend of gruesome science fiction into the mundane background of a boy in high school, and also because it contains my favourite scene in both manga and anime format that I like to call “Edward Penishands”. (Do not Google this, but I have included a little titbit in the space below this review for your not-quite-safe-for-work enjoyment)

Parasyte is an aptly named series. From space came eggs floating through the sky. These eggs hatched, releasing sentient parasites who sought out the brains of creatures who would be able to serve as functional hosts for them. The creatures, upon finding a host, sought to digest and assimilate the head of their hosts, become semi-transformative and driven by an instinctual urge to survive. Hundreds, even thousands of these creatures descent on the Earth assimilating primarily humans, the dominant form of sentient life on the planet, but also animals. They receive a single order: “Kill and eat this species”. In the case of Izumi Shinichi, a high school student who just happened to sleep with his headphones on and avoid a parasite-in-the-ear situation, his head escapes this demise, and instead his right hand is assimilated by the parasite.

As a fan of my right hand in general, I am not entirely sure how I would react when the morning after the incident, later on referred to as the “nightmare”, my hand transformed into a being with tentacles, eyeballs, lips, teeth and large spikey claws. What has occurred is that Shinichi and his new friend Migi (the Japanese for "right"), are now forming a symbiotic relationship in a world rapidly descending into madness as these parasitic transforming creatures in human form indulge in devouring the populace to survive.

Parasyte, then, is the story of Izumi Shinichi and his ongoing survival in an increasingly hostile world where any animal, teacher, stranger on the street or even relative could be a parasitic creature waiting to end his “impure” symbiosis. It is the story of his friends and how they cope with the gruesome reality of multiple homicides, brutal decapitations and violence all around them by these hungry creatures, and it is the story of a boy losing his mother-dependency and cowardice and becoming a force to change the world, maybe for the worse.

This series is the adaptation of a classic manga by Hitoshi Iwaki and published in English with the final volume out a couple of years ago. The story was beautifully dark, focusing on the power struggles between the parasites as they fight for dominancy and survival and was hard hitting in both the art style, which was very graphic, and the discussions on what it means to be human, using the differences between the logical parasites and the contradictory behaviour of humans to good effect. The animation follows from this manga precisely, with minor variances in the scenes, dialogue, but largely following the sequence of events. As a 24-episode series and judging by its progress over the first five episodes, it will not be hard for the series to finish the story within this run.

One of the big draws of Parasyte is the semi-realistic art style of the characters and the monster design. The series sticks to natural human colours (no wacky blue hair styles here) with the monster design logical yet deadly. The parasites’ abilities are not limited by their human hosts, and due to their transformative abilities can morph into any number of biological and inorganic objects to use as weapons. In the first episode this art style is demonstrated through the transformation of a dog with a parasite for a head into a winged beast that attacks Izumi. Each parasite is a unique individual and is inherently selfish, although there are some who are superior to others and these individuals act as the major focus for Izumi’s ire during the series.

I will say this in no uncertain terms, in my opinion, this is the series to watch this season. With its high budget, animation quality, writing and its killer dubstep sound track, I have fallen in love again with Parasyte, although not enough for me to sacrifice my precious right hand for it.

This is just a comparison of scenes. On the left, the manga. Izumi has a forearm to be proud of when Migi senses heightened sexual urges towards his school crush. On the right, the censored version from the streaming broadcast, and rightfully so. I am such a child for enjoying this kind of comedy moment!

9
A gruesome science fiction thriller to make your hand tingle.