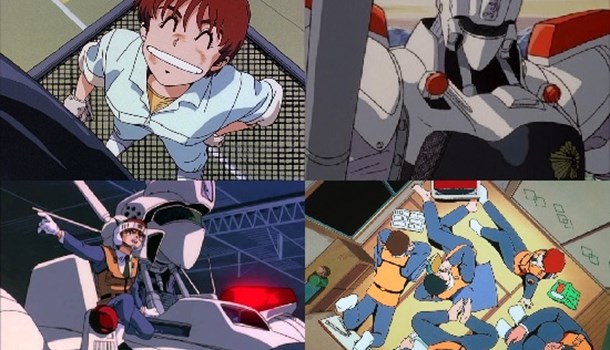 Mamoru Oshii will always be remembered for directing Ghost in the Shell, one of the breakout movies that established anime's reputation amongst general audiences in the west, but he has accumulated a very diverse portfolio beyond that electric dream. This ranges out from the start of his career as a storyboard artist to helming the historic (if not necessarily good!) very first OVA Dallos, to script writing (particularly his ongoing Kerberos opus, best known in the west for the anime movie Jin-Roh: The Wolf Brigade) and even directing a number of live-action features. It's evident then that Oshii is something of a Renaissance man trying his hand at many fields, and it demonstrates that it is unfair to typecast a director as much as it is an actor - thus, you should approach his 1988 OVA series of Patlabor: The Mobile Police without preconceptions, because it could provide some surprises. But will those surprises be pleasant discoveries or ugly exposures?

In the far-off year of 1998(!), we may not quite all have rocket cars and holodecks or be living on Mars, but at least big stompy robots will be part of everyday life. The development of the "Labor", a giant piloted mechanoid, has revolutionised industry and enabled the construction of tremendous projects far beyond the scale of any previous system, such as the enormous Babylon dam which protects Tokyo Bay from the rising waters of the melting poles. Labors have become ubiquitous sights, finding applications in many different fields, but because they are so widespread and accessible - and their size can make them dangerous if improperly used - they have also become a tempting target for criminals looking to make bigger heists just as workers are able to make bigger buildings. In response to the new phenomenon of Labor Crime, the police have created the Special Vehicles Unit, equipped with dedicated souped-up Patrol Labors - Patlabors - to meet and defeat Labor crooks on equal terms.  It's busy work and the SVU is expanding, with a group of new recruits arriving to take up roles in the newly-formed SV Section Two. As a new team equipped with shiny new updated Patlabors, SV2 certainly have the gear... but does this motley crew have a clue? Motor-head Noe, rebel kid Asuma, hen-pecked Mikiyasu, gung-ho Isao, gentle giant Hiromi, and no-nonsense Kanuka are a hotch-potch of a team, and who knows what'll happen when they get stirred up.

The Patlabor franchise was created as a group effort between some significant names in the industry, not only Mamoru Oshii himself but also Masami Yuuki (Birdy the Mighty), Kazunori Ito (.hack), Yutaka Izubuchi (RahXephon) and Akemi Takada (Urusei Yatsura). Together they formed the creative team Headgear to manage Patlabor, bringing together a weight of talent to push a mass of expectation. Patlabor also shares more with Ghost in the Shell than a director - much like the shifting perspectives of the various incarnations of that philosophising cyberpunk world, the beleaguered and hapless members of SV2 have found themselves dashing backwards and forwards across multiple timelines - the poor chaps mustn't know whether they're coming or going! The storylines and characters of the Patlabor franchise significantly differ between three separate continuities - the continuity of the movies (including this OVA series, which the movies are sequels to); the continuity of the early-90s television series; and the continuity of the 1988-94 manga and light novels. Although this particular Patabor portion is described as OVA Series 1, the future OVA Series 2 is not actually a follow-up to Series 1 but rather an entirely unrelated group of side-stories accompanying the television version.  Patlabor is thus a fairly complex franchise, but this release is easily accessible - as the inaugural entry of its continuity it's quite simple to follow. Western releases of the Patlabor movies have been out of print for a number of years, but knowledge of them isn't necessary either.

Over time, Patlabor has acquired a reputation for being a 'realistic' mecha series that took a hard look at its concept. Beyond my question of whether this reputation was really appropriate in the first place (one episode features SV2 confronting a giant sea-monster right out of Godzilla!), a realistic mecha series will always be a technical oxymoron due to the sheer impracticality of the technology, and how the square-cube law conspires to ruin our fun. This is something that Patlabor itself amusingly lampoons when Noe takes to the skies in a flying Labor, only for her brain's subconscious knowledge of physics to remind her that she's dreaming and bring her back down to earth (aher bedroom floor) with a bump. Confounded by technology, then, realistic mecha like Gasaraki try to focus on solemn and serious plots - where everything is staid and slow.

The mistake that a lot of studios make when producing realistic mecha shows - realistic shows in general, even - is that they forget that 'realism' is not the same thing as 'drama'. Our own real lives feature plenty of levity, and that is something that Patlabor itself recognises with a light-hearted approach to police life. The show is as much about what snacks to eat on stakeout and telling ghost stories as it is law and order. As a consequence, Patlabor is a very relaxed show. For much of the first episode the heroes' mecha are stuck on trailers in a traffic jam and their pilots spend the day cutting the grass - if any viewers don't pick up the hint, Isao's request to go off and play (sorry, "train") with his gun are shot down because taxpayers will only stump for one practice session a year.  The staff of SV2 don't really have the time to fully explore their characters in the limited running-time of the OVA, but they do define their central traits well and build up a happy dysfunctional family-esque rapport. The show isn't a comedy specifically dedicated to telling jokes, but there is a gently humorous and playful undercurrent that never lets the squabbling between SV2 get too nasty. For the most part, this genial attitude succeeds in being heart-warming and resists the pull into cloying schmaltz, bar one cringeworthy incident where a criminal hijacks his way across Japan just to see his wife after she's given birth - train tickets aren't that expensive, buddy. I'm also not quite sure whether to feel short-changed by the giant stomping sea-monster being defeated by the power of a really meaningful stare. It does serve to illustrate though that in several episodes the Labors themselves actually aren't even relevant to the resolution of the crisis... you could well argue that Patlabor isn't really a mecha series at all, just a police procedural that happens to have robots in it. To my mind the closest series to Patlabor in style and tone isn't any mecha series but rather Oh My Goddess! creator Kosuke Fujishima's earlier manga, the obscenely cheerful police soap opera You're Under Arrest, which began the year before Patlabor in 1987.

Suffice to say, people going into this OVA expecting a relentlessly paced, high octane and action-packed mechstravaganza are going to be sorely disappointed. For most of this OVA series there's more mecha action in the opening credits than there is in the actual episodes. What little fighting does occur is completely bloodless - the worst injury we see is gun-nut Isao dribbling an anime-nosebleed when he beholds a big cannon - and shooters have attended the A-Team School of Marksmanship.  One whole episode is dedicated to teaching us the dangers of irresponsible use of firearms and the duty of police to preserve the peace rather than just waste creeps. The episode where SV2 is chasing a runaway lorry features far more combat than the episode where there's a military coup with a nuclear threat, fer chrissakes!

The peaceful character of the series can overplay its hand and actually become weird and dislocating - a recording of sweetly chirruping birdsong might ease your stress, but if someone clamped headphones down on your ears and turned up the volume to maximum then it might get a bit off-putting. This becomes mostly apparent during the aforementioned putsch - tanks are surrounding parliament and the rebels are threatening to nuke Tokyo if their demands are not met, but everything is so... unhurried. Bored civilians watch the television news and then turn back to slurping their ramen, the trains are still running, the regular police seem more preoccupied with booking traffic offences than worrying about the threatened collapse of the rule of law. Even the mutinying soldiers themselves seem pretty easygoing about this whole armed revolution - after arresting the SV2 ground crews they don't have any problem with letting them order some take-out and argue over who has change for the bill. The dissonance punctures its own drama and trying to run shadowy conspirators and impassioned declarations of last-stand determination against characters sooty from comedy explosions sounds a lot like the show is trying to have its cake and eat it. This coup d'état arc is thus a club-footed stumble - while it's all contained within two episodes, that's a fair-sized chunk to lose when there's only seven episodes in the OVA in the first place.

An OVA budget does allow for some good animation - one stand-out sequence is a very fluid point-of-view shot of someone running down and turning around corridors, and it's quite a sight to see a Patlabor shaking itself apart when letting rip with a minigun. Such things are all the more impressive when you remember that this was made during the hand-drawn days. As much as I love to admire the lavishness of the real painted backgrounds, though, I can't deny that the age of the production is beginning to seep through - it's not a pristine transfer and there is a fair amount of grain and scratches on the film. The dubbing is entirely competent but in a number of scenes suffers from tell-not-show with the actors hastily motormouthing their way through a speech to cram in exposition before the character's lips stop flapping.

The release is fairly barebones, with a single static menu screen and no extras of any kind beyond some trailers for other series. It's disappointing that there isn't a clean opening sequence - again, this really should be a mandated minimum these days - and it's a bit of a shame for Patlabor specifically because this opening sequence is better than most in acting as a proper overture that introduces the show and gets the viewer settled into the tone, with a Patlabor monument providing shade on a hot day and Noe scrubbing up her own Patlabor with a chibi grin, exploring the love between a girl and her sixty-foot robot. The omission is forgivable in this instance though due to the age of the source material which may have meant that there was no textless footage available.

Patlabor is quite unique in putting its mecha more in the background, and that makes for an interesting prospect. Its quite deliberate avoidance of intense action (consciously shying away from fighting finales in some episodes) and its satisfaction with a more languid tone is pleasantly offbeat, although 'offbeat' becomes 'tuneless blaring' through its clumsy dramatic arc. They do say a change is as good as a rest though, and if you are getting worn out from more aggressive anime - and the deafening loudness of mass-media in general - but don't want to get stuck in the sticky syrup of moé slice-of-life at the other end of anime, Patlabor is actually quite an effective bridge between the two - it gives you room to exhale.

7
Getting a bit creaky at the joints and hazy in its memories, but this old-timer still has lots of stories of yesteryear to tell.