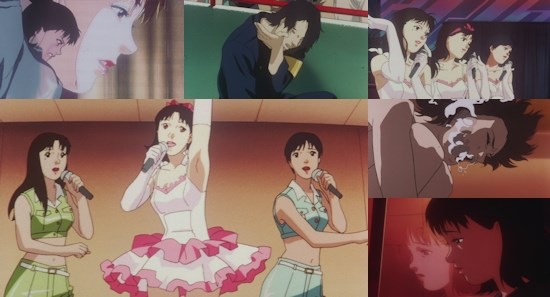 It's never a happy event to hear news of a talented individual passing away, but particularly distressing was the death of Satoshi Kon in 2010 - despite having only five directorial works to his name, each and every one is regarded as a masterpiece to some extent, and his signature ideas and treatment of the recurring themes within his work will most likely never be seen again in the sphere of animation. In short, Kon was one of a kind, and his directorial debut is a perfect example of his work at its finest - a work that we now get to enjoy in a remastered Blu-Ray edition courtesy of Anime Limited.

Perfect Blue is the story of Mima Kirigoe, part of a small-time idol trio who is about to embark upon the next step of her career by shunning her life as a singer to become an actress, much to the disappointment of her adoring (and occasionally obsessive) fans. Of course, walking away from the image of a squeaky-clean and vacuous idol to enter the often gritty world of acting is far from an easy one, and while Mima takes a small step towards achieving this goal by winning a miniscule role in a TV drama, the head of her management agency are keen to push her further forward into the spotlight, no matter the personal cost.

While all of this is going on an unknown fan seems to be stalking Mima, even going to the extent of putting up a web site taking on her identity and posting her every thought as if they were Mima's own with uncanny accuracy, while Mima herself struggles with ever-more tasteless expectations foist upon her to move forward as an actress and further away from what even Mima would recognise as herself. Once threatening words turn to actions and brutal murders begin to take place alongside the plot of the drama Mima is now starring in, our protagonist begins to lose any grip of her own psyche, and we join her on a descent into madness that leaves us wondering whether she even exists at all...

When we say that it's us who joins Mima on this dark and confusing journey, this is the real genius of Perfect Blue and what turns it from a bog-standard psychological thriller into something truly special. Rather than going to any great lengths to mark dreams or delusions from reality, Satoshi Kon has instead opted to show everything that takes place "as is". With no hints as to what we're seeing in any given scene is an actual event or a psychotic nightmare, and with events often layered together with nothing but smash cuts between them, the effect (for a first-time viewer particularly) perfectly captures Mima's disorientation as her life swirls between her reality, her dreams and her acting role.

Such a treatment of the film's subject matter could so easily have come across as a gimmick, or conversely descended into an incomprehensible mess, but Perfect Blue avoids both of these pitfalls - the film always give you just enough of a grounding in reality to tether yourself to, events wrap up in a way which flow nicely and make perfect sense while still leaving just enough of a question mark to allow doubt to creep in, and above all the entire movie is perfectly paced and utterly compelling so as to leave you on the edge of your seat throughout.

Visually, Perfect Blue may be showing its age at this point at around fifteen years old, but this remastered Blu-Ray treatment is undoubtedly the best-looking version of this film you're likely to see. With a largely clean transfer, the film's best moments are really brought to the fore and look great; while unfortunately some of the less well-animated or high quality scenes also stand out all the more, these are outnumbered by moments that depict Mima's descent into madness and her struggle against it wonderfully, and the overall look of the film - seated as it is with a realistic aesthetic for the most part - suits it down to the ground. For all of its judders and lower quality scenes, none of these issues inherent from the original masters are able to detract from the majesty of the film as a whole.

The film is also equally well served in terms of audio - while the Japanese dub is simply tremendous its English counterpart is no slouch either, and both languages have a 5.1 surround sound track to choose from (the Japanese version of which admittedly sounds more dynamic) alongside an uncompressed Japanese stereo track for good measure. As a point of note, the Japanese 2.0 and 5.1 audio tracks have been transposed in this Blu-Ray release's menu, so if you want Japanese 5.1 audio select the stereo track in the menu and vice versa! This is thankfully the only error we experienced on the disc, which otherwise contains flawless subtitles and some interesting extras which include an interview with Mr. Kon himself.

We often talk about Japanese animation only in isolated terms - how well a given film or series compares to other examples within the medium. In Perfect Blue's case this is actually rather unfair, which speaks to the quality of a film which started its life as a live-action project before switching to an anime production following the Kobe earthquake - this is a movie that deserves to be judged as an incredible piece of cinema in its own right, rather than "just" an anime movie. Even thrust forth into this lofty company, Perfect Blue remains a truly stunning piece of work that deserves every plaudit it gets. This isn't just a must-watch piece of animation, it's a must watch film full stop, particularly when it comes to this top-notch Blu-Ray treatment.

10
Never mind calling it a classic anime movie - Perfect Blue is a classic piece of cinema in its own right.
LATEST REVIEWS