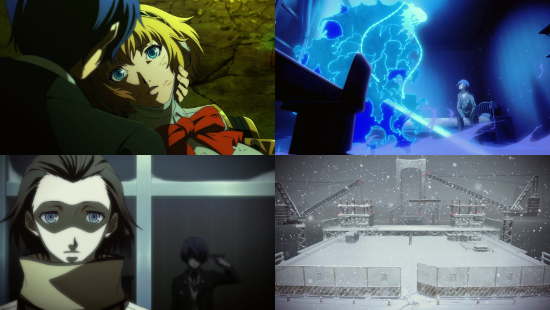 Here we are, the final Persona 3 movie! I have to admit that having held the torch for the first two movies the third left me feeling rather deflated about the whole endeavour. Now we come to the final installment - will it limp across the finish line or pull itself together for the finale?

The large shadows have been defeated, and yet the mysterious Dark Hour and the metamorphosed school - Tartarus - remains. Re-uniting on the bridge where Makoto lost his parents ten years ago, Ryoji reveals to him the true nature of the threat facing mankind. Faced with the utter despair of an impossible situation, the group of persona-wielding friends grapple with their own feelings and a world coming apart at the seams as the final end approaches.

This final movie picks up directly after the end of the third installment, filling in the explanation that was so rudely cut off. Putting all its cards on the table, this explanation lays out all of the remaining plot revelations for you in a very blunt manner right at the start. This is honestly very refreshing, if somewhat jarring, as you go from being utterly in the dark to full disclosure, with this film being even more explicit than the original game was! I really appreciated this - it provides scope to the terminal situation that the cast now find themselves in, as well as the implications to the wider world displayed in a much more vibrant fashion. This film is notably longer than previous instalments, and also manages to use its time a lot better, providing an even pacing and enjoyable ramp all the way up to its conclusion.

What follows is something I am pleased to see the film pull off well - a month plus of in-universe time where the cast mope around before the climax of the story. This gives them (and you) time to wallow in this final situation in a variety of ways - philosophy time with your friends Strega, another dose of meditation on the inevitability of death (this time successfully, unlike previous attempts), and other character moments besides that all manage to fit together. The state of the world and how this creates a feedback loop ensures the cast also takes on more of a clear form, and becomes a bigger character in its own right. The movie even manages to find an interesting and effective way to blend in the bittersweet “bad ending” path from the game, making clear that it is the path not chosen rather than trying to pull a cheeky switcharoo, a tactic often tried in other adaptations to poor effect.

While all this rich emotional work is going on, it is a shame that the secondary cast are reduced to shadows (ha ha!) of themselves, mere patterns devoid of any depth stuck reciting their character trait/motivation constantly or acting as a chorus calling out in concern for the main character. Only Junpei feels barely fleshed out, and he had to lose a girlfriend to get that far. For all of the movie’s attempts to show what is happening in the wider world, the main character’s connection to it remains tenuous due to the limited interaction with it outside of a few nudges to Social Links in the original game.
It gets so bad at the midpoint of the film that Elizabeth, an outsider, has to step in to provide the main character the emotional fortitude moment he needs to move the plot along. While a very welcome sight, this does feel like a deus ex machina, the creators realising that had neutered the rest of the cast so hard that they had to create something new from whole cloth to move the film along.

The cast finally get their resolution and a path forward just in time for the story to jump forward a full month (not unusual in this film series, but still jarring) and spend the last half of the movie on the final conflict. I had been excited for this film series just to see the climax animated, and thankfully this movie does it justice, blending everything together to make it both a visually and emotionally enjoyable spectacle. The choreography in particular is great - previous movies have shown brief flashes of brilliance with fights and now it finally all clicks together, making for a kinetic and visual treat while still interweaving the intense emotional struggle you expect from adapting a long final boss rush that would take over an hour in-game. Perhaps a little too late you finally get to see the full power of the cast and their Personae. For all its accumulated inadequacies and missteps, this film series does at least manage to make the most out of the climax, elevating it above the PlayStation 2 and PSP original in both scope and sheer artistic brunt.

The movie once again uses a number of fan-favourite tracks from the game soundtrack and manages to augment them, providing a good soundtrack for the film, especially in its quieter moments. Despite this it misses the mark a few times with when it puts some of the most “important” tracks in unexpected or just plain odd places.

This final movie is a great payoff, but does it redeem the previous okay-to-lacklustre efforts? No, not really. But, if you have already pushed yourself through three previous films your persistence is rewarded in this last installment with some great adaptation and enhancement of the original material.

Japanese 5.1 audio with English subtitles. Collector's Edition comes with a subtitle-only copy of the film on Blu-ray and DVD, along with expanded packaging and booklet.