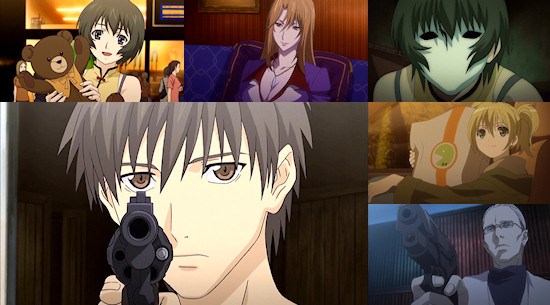 Phantom: Requiem for the Phantom - Part 1

We've probably all watched at least one instalment of "Holidays From Hell" on TV over the years, but I would imagine even the worst nightmare vacations pale into insignificance with the troubles suffered by this show's protagonist.  What starts out for this Japanese man as a simple break in America ends with him being given a mysterious package by a terrified journalist before said individual is gunned down, only for the cold-blooded assassin responsible to turn her full attentions to our hapless tourist as he tries to escape the killing machine he's suddenly been faced with.

Not that our new-found friend here can remember all this, as he awakes without a clue as to what his name is, where he's located or what he's doing there.  In time-honoured assassin tradition, this is simply a pre-cursor to a test of his own skills as a killer, as he faces another life-or-death battle against the girl who tormented him prior to his memory loss.  Incredibly, his instinct in the face of such danger marks him out as a unique individual, and before he knows it our protagonist is named "Zwei", the trainee to the vicious, detached but beautiful assassin known only as Ein, or "Phantom" to her employers.

The employers in question are a group named Inferno, and as their name perhaps suggests they aren't exactly a charity outfit with an interest in improving healthcare.  Instead, Inferno are seeking to place themselves as a kind of United Nations of mafia groups, bringing various unsavoury, shadowy groups into their organisation and, when negotiations to do so fail, using less diplomatic means of achieving their ends.  This, of course, is where our pair of assassins fit in.

After seeing Zwei undergo intensive training and come out the other side as a proficient killer, it isn't long before both assassins find themselves subject to conflicting forces within Inferno - needless to say, a powerful organisation like this tends to attract greedy, power-hungry types who want its riches for themselves.  Thus, we're soon pulled away from simple assassination missions as both Ein and Zwei find themselves conflicted as to where their feelings and allegiances lie, building towards a shocking ending that pushes Requiem For The Phantom in an entirely different direction for the last few episodes of this first half of the series.

It's this twist and major change to the make-up of the series that perhaps underpins what Requiem for the Phantom does best - although a lot of its concepts and ideas aren't exactly fresh, the episodes on show here never stop moving forward and, more importantly, moving the series forward.  Here is an anime which isn't frightened to take what seems like a potentially successful formula and then tear up its rule book to effectively start afresh, making for a varied viewing experience that generally works pretty well.  Nothing about Phantom screams "instant classic" by any means, but it has a story to tell and does so proficiently and in a decidedly less than predictable manner, which is more than enough to keep the viewer's interest throughout all of the thirteen episodes available across the two DVDs which make up this half of the series.

The only area where Requiem For The Phantom threatens to disappoint is in the character of Ein herself - she's very much your typical monotone, disinterested anime archetype, and although this serves a purpose in terms of the show's construct and premise it doesn't stop her being as dull as dishwater.  Other characters within the show also occupy rather tried and tested archetypes but these individuals at least shift and move in their emotions and decisions over time, with Zwei in particular contrasting against his partner in death by moving forward substantially as a character over the course of the series to date.

Visually, Bee Train's animation work here is very much of the low-budget but passable variety - you won't be wowed by the show's visuals but if you can forgive some decidedly rubbish gunfights they do the job well enough not to get in the way.  This is equally backed up by a pretty decent soundtrack, even if it does blatantly rip-off The Matrix Reloaded's "Burly Brawl" for one of its signature background tunes.  Finally, the English language dub of the series is at least as capable as its Japanese counterpart, meaning no complaints from us on that count either.  All of this is wrapped in a rather grainy (although I assume deliberately so) DVD transfer that matches the show's "good enough" animation quality.

Phantom: Requiem for the Phantom isn't the kind of series you're likely to hear a big buzz about - it isn't a work of genius, or even as deep as it perhaps thinks it is, by any means.  However, the first half of the series does have a strong, ever-changing story to play with, and it goes about doing this with gusto to make for a show that is engaging more often than not.  With its American influences and setting clear from the offset, this seems like the kind of series sure to grab the interest of western fans - thankfully, its interest of which it is largely worthy, and if the second half of the show proves to be of similar quality this could well be a worthy purchase.  If nothing else, Phantom's first half promises to be a decent impulse buy for an anime fan on the look-out for something new to watch.

English 5.1 and Japanese 2.0 audio with English subtitles.  Aside from the usual textless ending and opening credits, the second disc of this release also contains a series of six subtitled picture drama extras from the show's original Japanese physical release.

7
A solid, fast-moving and ever-changing story makes this an entertaining offering that acquits itself well overall.
LATEST REVIEWS