Phantom: Requiem for the Phantom - Part 2 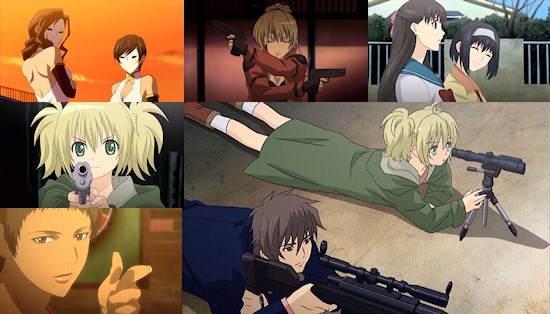 Phantom: Requiem for the Phantom - Part 2

Despite not being the most dazzling series in terms of its visuals or characters, the first half of Phantom: Requiem for the Phantom rather impressed us, with a well-formed and executed story which morphed, twisted and turned enough to keep our interest well and truly piqued for the entirety of its first thirteen episodes.

As we dip back into the series for its second half, we find the current iteration of deadly assassin extraordinaire "Phantom", known only as Zwei, exhibiting some decidedly un-Phantom-like behaviour, as he continues to harbour child genius Cal - although she clearly has what it takes to become an expert killer in her own right, our protagonist still holds doubts as to exposing such a young girl to the same travails that he once had to endure despite her obvious enthusiasm.  As conspiracy abounds within the walls of the shadowy underworld organisation Inferno and Phantom closes in on those responsible for killing Cal's friend Judy however, it seems as if Cal and her unlikely buddy have come to an arrangement to satisfy both of their needs.

Events never run as smoothly as planned however, even when you're the most feared man in an all-powerful organisation, as a familiar face begins to haunt Zwei while he goes about his business, and ultimately the manipulation of power going on within Inferno threatens to bring him down as both his own and Cal's life comes under threat.  With some bonds broken and others repaired, we skip forward in time to find Zwei trying to live out an ordinary high school life in his native Japan... a dream which is always ripe to be shattered as his past mistakes comes back to haunt him in vicious fashion.

It's the jarring moment of this leap forward two years in time which, unfortunately, stretches the previously enjoyable Requiem for the Phantom to breaking point.  One of the simple joys of the series is its concern with an adult world without the usual reliance on high school shenanigans, yet suddenly we're thrown into just such a scenario without any particular need for it.  Add to that the fact that certain characters have physically matured to a ridiculous degree in just a couple of years, and the viewer is set down a frustrating path that ends in a weak and rather unsatisfying ending.

Beyond complaints about its setting, perhaps the biggest problem suffered by the second half of the series is that it tries to replicate the success of the first by doing the exact same things again - just as Zwei had to go on the run in the show's first half, so he has to do so again in the again, and the topics of loss and revenge crop up under almost identical circumstances to leave us with a "seen it all before" feeling whenever anything noteworthy happens during the episodes contained within this second and final volume.

After that enjoyable first volume, this certainly feels like a wasted opportunity for the series, as beyond simply "seeing what happens" there's nothing to really compel you to keep watching here - everything from the progression of the plot through to the actions of its characters becomes predictable, and give or take the odd moment here and there there's nothing to grab your attention or take you by surprise.  For those who have picked up the first half of Phantom on DVD, then "seeing what happens" might be enough to persuade you to buy this closing instalment, but those who are still in two minds about the series should note that this is very much an anime of two halves - simple but smart execution to start, but repetitive and predictable come its ending, a fact that not even a surprisingly good turn by Ali Project for the show's second opening theme can overcome.

Phantom: Requiem for the Phantom certainly isn't a series that should be avoided at all costs - its tales of underworld assassins and double-crossing have a certain draw to them and its initial efforts are undoubtedly well-written - but it doesn't leap out as a must-buy either with its low-budget animation and a major drop-off in the quality of its story-telling throughout this second part of the series.  If the concept of the show grabs you then it might be worth a look (if only for its early successes alone), but taken as a whole Phantom never quite lives up to that early promise.

English and Japanese audio with English subtitles.  Aside from the thirteen episodes split over two DVDs (with eight on the first and five on the second), extras consist of a series of subtitled picture dramas, commercials and text-free opening and ending credits.

5
This second half of the series tries to recreate the success of the first... and becomes predictable and repetitive as a result.
LATEST REVIEWS