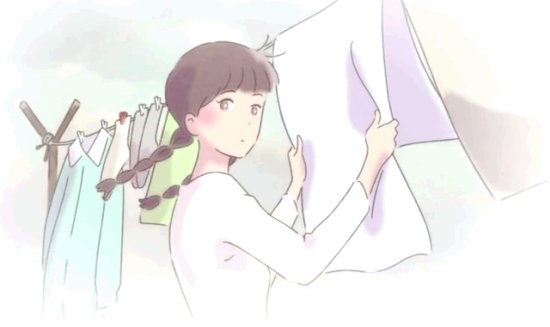 It's not really any surprise that the 2011 Touhoku earthquake and tsunami - and the disaster at Fukushima nuclear power plant that became its most terrifying result in the wake of said earthquake - has already become a major influence for writers of various stripes in Japan, from manga to film. From Makoto Shinkai's current blockbuster Your Name onwards, Fukushima and what it came to represent in so many ways has become a cornerstone of recent story-telling, and although perhaps less overt than other media in its treatment of the disaster Pigtails is another story that has a clear influence from that nuclear disaster running through it.

Based on manga series Mitsuami no Kami-sama (but with significant chunks of its content excised to squeeze it into a short film format), Pigtails is a difficult tale to discuss succinctly in any form without spoiling it somewhat, so be warned that out of sheer necessity we're going to have to touch on major components of its story that are initially kept from the viewer here.

The film begins with a surprise, as our first lines of dialogue come not from the pig-tailed protagonist of the story, but from the clothes pegs with which she is hanging out her washing. This sets the tone for the rest of the film - you won't hear a word from any of its human characters throughout, but the inanimate objects which surround the main character and exist in her world have plenty of things to say for themselves. As for our protagonist, she lives alone in a little house on an otherwise deserted beach where the only other feature of this faceless landscape is a smoking power plant that looms over all. The girl's isolation - save for men in protective suits who regularly check upon out protagonist - is eventually broken by one boy her own age as he strikes up a friendship with her, but as the reason for the pair's place as outliers in a world becomes clear there's a difficult decision to be made.

Having been privileged enough to watch Pigtails on the big screen twice - at both the Glasgow and Edinburgh legs of Scotland Loves Anime - I can most assuredly say that it's a short film that richly rewards multiple viewings. I came out of the film's first screening feeling simply incapable of putting together my thoughts on what I'd just seen, largely due to the way in which it loads a lot of its thought-provoking questions into the front of the film while the context for what it's pondering doesn't appear until its final act. While joining the dots on those two facets of the movie aren't particularly difficult, you can't really dig into and soak up what it's talking about without that knowledge, making a second viewing a precious opportunity to really explore its themes and the points it raises in detail.

It's only at this point that the other shoe drops and you begin to appreciate how much Pigtails crams into its short running time as it ponders life and death, waste and renewal, selflessness and usefulness, the concept of "home" and plenty more besides. Not that the film seeks to comment explicitly on any of these things - it seeks to ask lots of questions rather than attempting to provide any answers, instead leaving all of its weighty subjects for the viewer to ponder. That style of narrative isn't for everyone, but for me it's a fascinating way of broaching the subjects at hand - provided you're willing to give it those multiple viewings, of course.

Visually, the film's simple but pleasant animation style matches the story it tells - sparse and occasionally bleak, but with a life of its own bubbling underneath which comes to the surface as inanimate objects from cushions to clothes pegs argue and chatter amongst themselves from their own decidedly limited perspective on life. Even with no dialogue for its main characters, there's just enough emotion in the way they're animated to put their thoughts and feelings across successfully, while the broader aesthetic makes for an odd juxtaposition to its unfolding story that only serves to accentuate the elements that come to the fore later in the film. Pigtails isn't the most striking film you're likely to see but it wears its look well, and feels like a carefully crafted work - as you might expect from much of the creative team behind Miss Hokusai.

Pigtails is certainly a curious film - there's part of me that views the fact it requires multiple viewings to really get to grips with as a sign of potential weakness, and one does suspect that there may have been ways for the story to circumvent those issues. On the other hand, given its short length it doesn't seem unreasonable to say that watching the film twice is more than worth the pay-off (and with a home video release in the offing, you'll be able to do so at your leisure), and even without previous viewings there's a fair amount to get your teeth into in terms of both entertainment value and thought-provoking concepts to ponder. It's the sheer wealth of concepts and ideas that Pigtails touches on - however lightly - that marks it out, and provided you're willing to dig deep to extract every question and idea the film floats then you'll find some surprisingly rich threads within its sparsely populated world.

The film has been acquired by Anime Limited for a home video release alongside other Production I.G. shorts

7
A short film packed with thoughts and questions, but one that requires multiple viewings to fully appreciate the myriad topics it covers.
LATEST REVIEWS