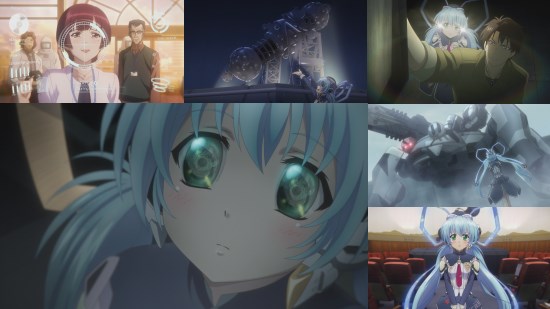 In a ruined, post-apocalyptic future world, there's little time or reason to look up to the stars - they're of no help in recovering the wreckage of humanity, and besides the thick grey clouds and rain obscures them constantly anyhow.

For the unnamed, cynical man trying to pick his way through this shattered world grabbing whatever he can to survive - an occupation that sees him known as a "Junker" - the closest thing to comfort he can hope to find is an unsullied bottle of alcohol or some more cigarettes; a difficult task in world where what resources are left are dwindling, and the only certainty is that some automated military sentry is likely to be hanging around the next corner ready to terminate him with extreme prejudice.

Within this bleak landscape, you can perhaps understand this Junker's surprise when a foray into an abandoned shopping mall brings him face to face with another being, although it quickly turns out that they are most certainly not human. In fact, the Junker has wandered into a planetarium, and this chance encounter is with the android attendant of the facility. Yumemi Hoshino is, it seems, entirely unaware of the ruined world outside of the building, and even with a gun pointed at her face she continues to enthusiastically greet her new customer as per her programming.

This rather insistent and seemingly slightly broken robot is one thing the Junker could do without to complicate his day (indeed, an old acquaintance of him specifically warned him about days exactly like these), but the planetarium is at least dry and comfortable enough for him to humour this eccentric android for a moment while he gets some rest. Little does he know that this is just the beginning of an encounter that will reshape the rest of his life...

Planetarian began its life as a short visual novel developed by Key, and is now also available in English via Steam - with no branching paths, there is only a single outcome to be had from its story, and it is of course this tale that the anime relates. The mission for the narrative is simple - build the relationship between man and android, make you care about both characters, then take those feelings which have been inflated greatly and stick a pin into the resulting balloon of emotion so that it bursts in spectacular fashion.

There can be little doubt that this approach works to great effect in the original visual novel - as we're treated to no shortage of inner monologue from the Junker that serves as our protagonist, we get to not only see and hear Yumemi's thoughts and reactions but also understand their effect on this man, and why his cold exterior melts over the course of the story. This presents an issue for the anime adaptation, which largely steers clear of any inner monologues to leave us watching on as an external third person in events, in turn meaning that we have to interpret each character's words and actions for ourselves without any deeper understanding of the emotions or thought processes driving them.

While this presents an interesting opportunity to deliver Planetarian's story in a way which could be regarded as less contrived and emotionally exploitative than the visual novel (although I don't think there's anything wrong with toying with a reader's emotions in the way Planetarian's story does, it should be said), it's also a challenge that this anime offering never quite successfully pulls off. Without any insight into the mind of this Junker, it's hard to get any feel for why he warms to Yumemi and wants to help her, and his behaviour is deadpan enough to obscure his intentions or desires for much of the series. Although this five episode OVA is paced well enough and makes decent use of its limited setting, its big emotional payload in the final instalment doesn't hit you like a tonne of bricks in the same way as its source material.

This isn't to say Planetarian is a complete failure in that regard either - it still manages to find some tear-jerking moments, not just in its final episode but also sprinkled elsewhere as Yumemi recalls her past and the departure of her former work colleagues, or posits on the possibilities of a robot afterlife. It's these moments where the series is clearly at its strongest - bolstered by solid animation and a suitably understated but moving soundtracks - but it also points to the fact that it could certainly have hit much harder with the emotional arsenal at its disposal.

As we've already mentioned, the presentation of the series is sound - there isn't too much to test the show's animators as much of the OVA takes place in a limited number of environments, but it does manage to convey the majesty of the stars as an important inflection point in the series and still has enough in reserve to make the show's rare action scenes look pretty decent. The Japanese voice cast also have enough going for them to carry what is effectively a two-person play without things ever feeling dull or repetitive - a fact similarly helped by the tight pacing of the series.

If we were to be reductive about Planetarian, our advice would probably be "read the visual novel". Yes, it'll take you twice as long as watching this anime adaptation, and the pictures won't move so you'll have to (shock, horror) use your imagination, but if you want the full emotional impact of its narrative to land on you then this is undoubtedly the way to go.

On the other hand, if you don't want to sit clicking your mouse, this is at least a more convenient way to take in the story and its major plot beats - it won't leave you a tearful wreck in the way that it probably should, but it'll at least do enough for you to engage in and care about its characters to some degree. Overall though, this OVA probably serves better as a refresher for fans of the visual novel in advance of the theatrical film landing in Japan this September rather than the ideal first experience of what is undoubtedly a strong, impactful story.

You can currently watch Planetarian in streaming form on FunimationNow.

6
A solid adaptation of its source material, albeit without the same emotional impact as the visual novel from which it's born.
LATEST REVIEWS