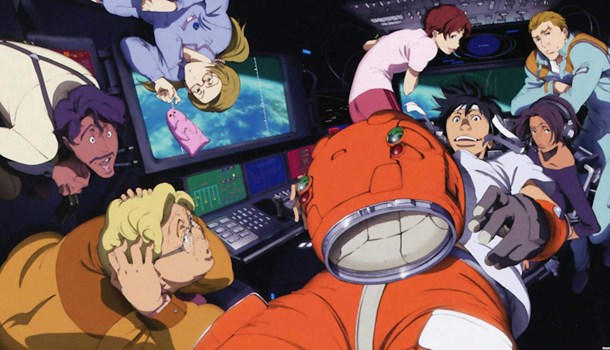 Opening with a montage to rival Enterprise, Planetes is a set in 2075, where the upsurge of space travel has revealed a new danger to our species - space debris around the planet is now a very real hazard, some of it flying around at up to 8km per second. After a tragic incident involving a passenger liner, the governments of the Earth set up space stations to monitor space travel and clean up this dangerous debris.

Planetes introduces new employee Ai Tanabe, who has been assigned to the Debris Section (or Half Section as it is derisively known, for being half-staffed, half-assed and half-witted) and she soon finds herself surrounded by misfits and oddballs, struggling to do their jobs with minimal funding and minimal respect. Chief among these is Hachimaki, the disgruntled rebel who takes pride in his work but rejects authority of any kind. As the series progresses, you get to see that he has a heart, but it's well hidden...

With an impressive degree of realism, Planetes is a mature and detailed look into a very likely future - with the emphasis on character development, each episode on this disc manages to give everyone plenty to do.

The animation is detailed and attractive, and its nice to see a space series that sticks to established laws of physics (no mobile suits or beam sabers here!) The music grows on you, but won't set the world alight.

If you're looking for a comparison, think Scrubs in space - an equal measure of comedy, drama and charm blend to make each episode memorable and entertaining.

Extras include audio commentary on the first episode from the Japanese voice actors who play Ai and Hachimaki, as well as the Director, which is certainly lively! The usual character profiles and trailers are here too.

9
A wonderful blend of realism and character create an anime with a mature and fascinating outlook.