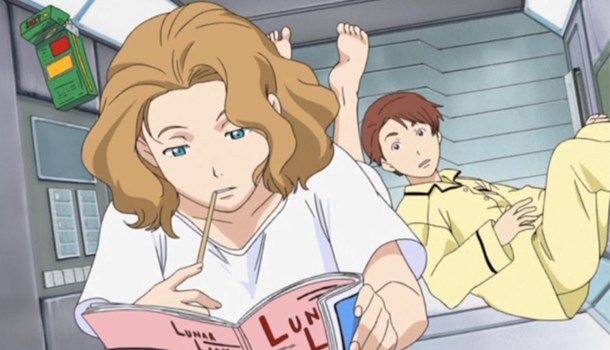 As Planetes gets into its stride, the space soap-opera really comes into a world of its own.

Having met the majority of the cast, the series really seems to have fun developing the characters and throwing us some curve balls. These two volumes introduce Hachimaki’s genius father, the threat of the Space Protector movement and even pitches some long-lost love interests into the mix.

Once again, the series succeeds because of the excellent writing and the lovable characters that inhabit a well thought out and plausible world. The action shifts from space, the moon and the Earth, giving us a tour of a world that’s distant and yet somehow very familiar.

The terrorist activity is also resonant with today’s climate, with your sympathies fought for by both sides – Hachimaki’s passionate desire to explore space, and the Space Protectors wish to see the Earth set to rights before the privileged nations spend money on what it sees as frivolous capitalist pursuits.

The trauma of space is also brought home when Hachimaki is involved in an accident and his psyche is irreparably scarred – his struggle to regain his courage is admirable, but it’s a testament to the series maturity that he’s never quite the same again.

The series aesthetic remains sharp and colourful, with an emphasis on realism and plausible science which creates a series that stands out from the rest of the Sci Fi crowd. The voice acting is, on the whole, excellent, with a few irritating performances but nothing that mars your enjoyment.

If you found Stratos4 too twee, Gundam Seed to incredible and you want more depth than Witch Hunter Robin, then Planetes is for you. Seems that Beez really do have something to cater for everyone!