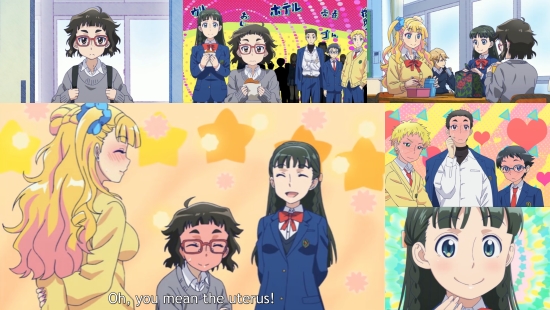 Please tell me! Galko-chan follows the homeroom conversations of three unlikely high school friends. The nerdy Otako, sporting glasses and being referred to as the ‘otaku girl’, is friends with Galko – a popular girl with big breasts and short skirt, described as a gyaru. Ojou, the rich girl (and somewhat of an airhead) makes the trio complete. Whilst this may sound like your standard slice-of-life anime and stereotypical cast, don’t let that fool you! The series opens with the question if girls with big breasts also have big areolas, which instantly sets the tone for the show.

Despite being only seven minutes long, every episode tackles a variety of questions and subjects not many other series would touch - topics such as whether to use tampons or pads, the correlation between eyebrow hair and pubic hair, and even hairy butts get thoroughly discussed. As all three girls are very different in personality, this gives the viewer three different perspectives on every topic. Even though the show has obvious comedic intent and sometimes coarse conversations, the topics discussed are still realistic enough to follow.

As the main character and most popular of the three, Galko herse4lf is usually the centre of most topics. Where most attractive girls in series seem flawless and perfect, Galko openly talks about her period, pooping, and the size of her nipples.

Otako, seemingly the most reserved of the three, brings up most of the intimate conversations by asking Galko outrageous questions (“are your nipples inverted, Galko-chan?”) or sharing her knowledge about equally intimate topics she has read.

Being somewhat of a third wheel, Ojou sometimes bluntly chimes in like a true airhead. However, when Otako goes too far in torturing Galko with outrageous questions, it is Ojou who is the voice of reason and urges Otako to make up with Galko.

Sometimes, three male classmates of the girls get the spotlight. They are seen speculating what colour underwear ‘experienced’ girls would wear or what breasts feel like.

Visually, this show doesn’t stand out, but it doesn’t need to – the real power of the show lies within the comedic and often brass conversations between Galko and her friends. With episodes only seven minutes long (and perhaps because the show only just begun airing), there isn’t much depth in terms of character development or intriguing storylines, which, again, the show doesn’t necessarily need. The show focuses on questions girls might face but are too shy to talk about, and by keeping the show light and humoristic these topics become a lot more approachable.

All in all, Please tell me! Galko-chan is a light yet entertaining anime. If you’re not one to easily blush, this show is not one to miss!

You can currently watch Please tell me! Galko-chan in streaming form on Crunchyroll.