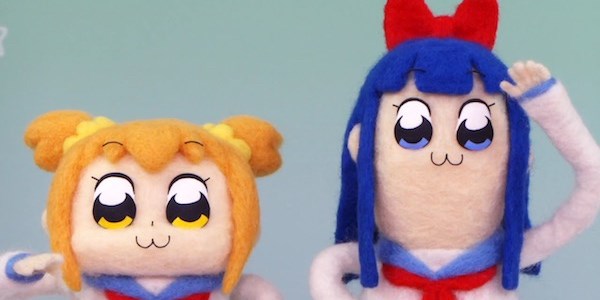 If you’ve ever spent time on social media and/or message boards amongst other anime fans, chances are you’ll have at one point seen a four-panel comic starring two distinct foul-mouthed schoolgirls. This was in fact your first taste of Pop Team Epic – a web-comic series which quickly climbed the ranks of internet memedom. Such was its exposure, that when an anime adaptation was announced for the winter 2018 series it was a pretty big deal. So much so that there are THREE different simulcasts of it available, with Crunchyroll and HIDIVE competing over subs and Funimation tackling a simuldub. If something has this much attention, surely it must be good, right?

Pop Team Epic features schoolgirls Popuko (the quick-tempered short one) and Pipimi (the calmer tall one) as they bounce through a series of vignettes that can be mundane one minute and surreal the next. Pop culture parodies are frequent, and a sense of realism is entirely optional.

According the Collins English dictionary synonyms for the word “bizarre” include strange, extraordinary, fantastic, comical, ludicrous and grotesque. These words might not all mean the same thing, but together they encompass about the best description of Pop Team Epic you’re ever going to find. This series is an assault on both comedy and animation, holding nothing back as it frantically jumps from one skit to another. Scenarios can seem ordinary one minute and extraordinary the next, which is best emphasised by the show’s somewhat biting criticism on Japan’s idol culture turning into a clone apocalypse where Pipimi is M. Bison from Street Fighter. Its comedy style is loud, brash, and without logic, which is clearly intended to divide audience opinion. The breadth of properties at its disposal for parody is staggering, with these few episodes alone reeling off obvious targets like Skyrim, Your Name, and Guardians of the Galaxy as well as more obscure/unexpected media like Chrono Trigger, 1972 tokusatsu series Android Kikaider, and the music video to “Let’s Groove Tonight” by Earth, Wind & Fire.

What’s really strange though is that while the show paints itself as being crude and brainless, under all that nonsense there’s clearly some method to Pop Team Epic’s madness. For every joke that doesn’t make any sense there’s also one that’s just so dumb it’s perfect. Popuko angrily telling a cuckoo clock that it’s life will end in 30 minutes time as she patiently waits for it to pop out again springs to mind, which could only have been better (albeit even more polarising) if the whole episode had just been 30 minutes of her waiting. Even when the humour is falling flat, there’s joy to be taken in just where the show is going next. And that unpredictability factor is the beauty of Pop Team Epic - a different comedy show would set up its jokes, but here you never know what’s coming. Pop Team Epic is well aware of the fact that people are going to outright hate it, but it doesn’t care. It knows exactly what kind of chaos it wants to be and sticks by it. That’s a pretty admirable quality if nothing else.

It isn’t just the humour that’s often hard to comprehend either. Segments are animated by different teams and thus wildly vary in style - including traditional 2D animation, CGI, stop-motion modelling, and even pixel work. But the most notable of all are the crudely drawn “Bob Team Epic” segments, which are often as ugly as they are nonsensical. Like the humour on face value these might seem instantly off-putting, but Pop Team Epic just fully embraces them so that the humour stems from just how ridiculously off-model they can get. Other segments like the stop motion musical numbers are beautifully done, so it would be completely unfair to say that there isn’t any sort of effort or talent behind it.

But while ultimately comedy may be entirely subjective, that isn’t to say Pop Team Epic doesn’t suffer from some fairly notable flaws. The most significant of these is the misleading notion that each episode runs for a full 22 minutes, when it fact this runtime is made up of the same episode twice – once with a pair of male voices for the girls, and once with female (the order of which is switched up week by week). In episode one the use of male voices is brilliant - not just for the shock value, but because chosen actors Masashi Ebara and Hōchū Ōtsuka were actually pitched as voices for the characters in a strip years before an anime adaptation was even properly conceived. Following that the choices for actors have yielded some interesting results (episode three stars the Japanese voices for Dragon Ball Z’s Frieza and Cell), but ultimately aren’t worth watching the episodes twice for as the dialogue is exactly the same save for one or two lines.

The other joke that’s repeatedly falling flat on its face is “Hoshiiro Girldrop” - the parody magical girl idol anime which appears as the first episode’s opening credits and then each next week preview. Not only has the joke been done better so many times elsewhere, but it feels so horribly basic. Saying the show is “better” than this might not be the word to describe it, but it certainly doesn’t feel in line with the rest of the show’s erratic style.

So if you’re still interested, which is the best simulcast to opt for? A cursory comparison shows that HIDIVE’s translation may slightly have the edge over Crunchyroll’s, who sometimes remove the reference element of a joke in order to perhaps appeal to a wider audience. Crunchyroll’s subs will also often leave signs and/or pieces of dialogue untranslated (though the dialogue may then be translated in the second “half” of the episode) – the most notable example being the “ridiculous fortune” cards in episode 2. HIDIVE’s timing may completly fail to keep up with the rapid fire card changes, but at least they tried to do something with the joke. Crunchyroll just don’t even bother.

Pop Team Epic is less of a series and more of an experience – a rapid fire barrage of surreal humour sometimes accompanied by even more surreal animation. It can be brilliant, creative, and funny but it can also be so stupid that you wonder what on Earth you’re wasting your time with. The only thing for certain is that there’s never a dull moment. Some will love it, some will loath it, and others will simply be confused by the entire thing. But whichever camp you end up sitting in, Pop Team Epic will definitely get a strong reaction out of you. Once it’s achieved that, then it’s done exactly what it set out to do and couldn’t care less what you think.

You can watch Pop Team Epic in streaming form subbed via Crunchyroll or HIDIVE, as well as dubbed via Funimation

6
Whether you love or hate it, you definitely won’t forget it.