UK Anime Network - Anime - Princess and the Pilot, The 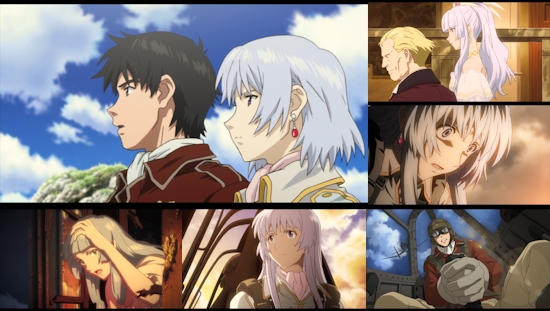 Fiction and fairy tales have long loved pitching a prince or princess alongside a relative pauper in the name of drama and romance, making it a well-worn trope across the gamut of story-telling. It's also a concept at the core of The Princess and the Pilot, Madhouse's 2011 theatrical light novel adaptation which has now arrived in the UK in subtitle-only form from Manga Entertainment. Can this tale offer a fresh take on an old idea?

It doesn't take us too long to be introduced to our pair of main characters and the lot in life - while a young boy is beaten and robbed by children his own age, left staring up into the blue sky of which he dreams, a young princess sees her hand offered in marriage to a prince in a political marriage designed to keep her family's name alive and hopefully end the war which is blighting their country.

Fast forward a year and we find our young boy, Charle, grown up and serving as a first-class pilot in the air force, while Princess Fana is left in limbo as her proposed marriage remains on hold as the war with the country of Amatsukami rages unabated. When an air raid destroys the royal palace and almost takes the life of the princess, it's clear that something needs to be done to try and bring this conflict to an end, and Fana's impending marriage might just be the solution.

Thus, Charle finds himself tasked with an incredibly dangerous mission - to escort the princess by air to meet with her fiancé, which involves flying through enemy airspace in a virtually unarmed and arguably technically inferior aircraft. With a handsome reward and a chance to aid his country up for grabs, Charle has no second thoughts about accepting his mission - but can he really hope to succeed when paired with a naive, sullen princess like Fana.

At this point, you might expect The Princess and the Pilot to descend into the kind of clichéd scenario we'd normally see from this kind of setup in an anime series, leaving us to watch a haughty princess and straight-talking commoner hate each other's guts before somehow accepting one another and falling madly in love. It should probably be refreshing that this film doesn't traverse that route, but in a sense perhaps that would have been preferable, as instead we're left with two mildly interesting characters getting on okay with one another from the very start, and then warming to one another on account of clumsy revelations about their shared past which feel shoe-horned in as a desperate attempt to bring the two together.

Given that the relationship between these two characters is the main thrust of its story, it's disappointing that this is perhaps the film's weakest aspect - both Charle and Fana are interesting characters in their own right, and the latter in particular grows hugely during the course of the movie, but when the two of them are placed together there's no real spark to power their relationship, which in turn leaves the overly elongated ending of the film in particular to feel lifeless. That disappointment is exacerbated by what could otherwise have been a strong showing from The Princess and the Pilot - the film's character designs are eye-catching, its animation competent and its initially jarring CG aircraft are put to excellent use when it comes to the occasional bursts of airborne combat which punctuate the film. Add in some moments of real emotional weight (which sadly are never built upon), decent voice acting - particularly from Sumire Morohoshi as Fana - and nice world-building, and there's no doubt that this story could have delivered upon far more of its promise had it been given a better script and characters to work with.

In terms of this UK release, we have no complaints - the Blu-ray version of the film looks excellent, sports both stereo and 5.1 audio tracks and a modest smattering of spoilers, and its subtitles are not far off being flawless, allowing you to appreciate the film unimpeded. Given that the back of the retail box mentions the presence of an English audio track, we should once again be clear in stating that this is a subtitle-only release, so no such audio track exists.

Harsh though we've been on major aspects of The Princess and the Pilot (and deservedly so, we'd like to think), we don't want to make it sound as though we didn't enjoy the film - even if its final scenes are a little too long the movie as a whole never outstays its welcome, and the journey it takes us upon is an interesting one that does allow its characters to grow before our eyes as individuals. If this is enough for you, and the clumsy handling of the relationship between those two main characters doesn't seem likely to bother you, then there's a pretty decent movie here, but if you're coming to The Princess and the Pilot for a beautiful tale of love and friendship then you're liable to end up feeling a little short-changed.

Japanese stereo and 5.1 DTS HD-MA audio with English subtitles. Extras consist of TV spots, previews and trailers for the film.

6
For everything that The Princess and the Pilot succeeds in doing, it somehow manages to fail in its most important task - offering the viewer a compelling and believable relationship between its two leads.
COMMENT AND DISCUSS
blog comments powered by Disqus