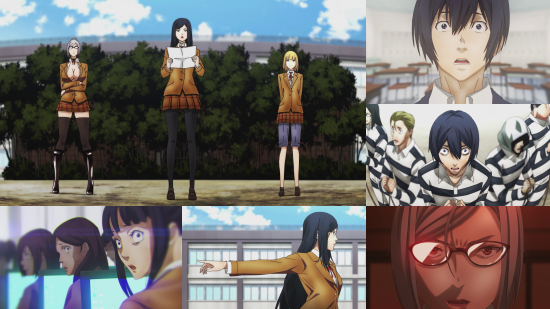 Growing up I was a complete git at school. I was the kind of nerdy delinquent who spent his time both being a prefect of the IT suite and abusing said power to manipulate and cajole others. I have fond memories earning a fiver showing someone how to play games over the IT network and finding pornography. If, however, I was attending Hachimitsu Private Academy, I would likely find myself in stripy pyjamas with my freedoms abused. Admittedly though, if my gaolers were the three members of the Secret Underground Student Council, I wouldn’t necessarily mind so much… though I could do without the accommodation.

Hachimitsu Private Academy used to be for girls only. It was a quiet, strong and dignified institution where young girls would be moulded into young women, ready to conquer the world outside. However, diversity and equality struck, and the school was forced to admit that most heinous of animals… men, or boys in this case. At the start of the school year, five filthy Y-chromosome bearers join the school for the sole reason of getting into the panties of some nubile schoolgirls. Now, in this position, some alpha versions of the male species would likely be quite successful; however, the five who have joined Hachimitsu are, and this is being quite nice, absolute rejects.

Reject roll call, before I begin on the truly interesting characters, the Underground Student Council. Our glorious five consists firstly of Kiyoshi, who is perhaps the straight man of the crew. Relatively normal, he is actually just trying to exist at school normally, until he gets dragged into schenanigans which leave him in the firm hands of Meiko and the council. Unfortunately Kiyoshi was led astray by the strategic genius of Takehito, a character who I would expect to spend all of his life in front of a Risk board trying to roll a double six. Of lesser note are the quiet Jouji, who is the “Kenny” (from South Park) of the crew. Shingo is just a delinquent and is, in my opinion, the least interesting character, but he does have his uses. The heavy hitter of the crew is the behemoth freak show that is Reiji, and it's best not to dwell what is wrong with this guy.

These five end up in the school’s maximum security prison (yes, prison) after being caught peeking and performing perverse acts while some of the girls in the school are changing. Being caught by the Underground Student Council President, queen of the ravens Mari Kurahara, is not a good situation to be in.

Guilty of all charges and sentenced to a month in prison. Of course, the sentence is only the beginning, and the man-hating Mari has other plans to cleanse her school of the infectious and insidious Y-chromosome. Getting these five into her prison is just the start of their woes.

Mari and her family have a stranglehold over the school. Her father is the Chairman of the academy and is also the horrific role model of a man who has pushed her over the edge. Her sister is more innocent and still believes that boys are nice; even to the point of, shock horror, liking one of them! However, Mari is a pussy cat compared to the sweaty, voluptuous and, let’s be fair here, massive erotic body of Meiko, the masochistic beauty. I would be lying if Meiko didn’t make me salivate. There is something about her, whether it’s the cavernous bosom, the muscles, that whip, or her enjoyment of good food. She is excellent and unfortunately completely subservient to Mari. Le sigh.

Then… there is Hana. Hana is special. To put it mildly, I think I have a cat who acts like Hana. If you see her doing something embarrassing, she will stalk you, go for you and make you suffer until she gets equal or greater humiliation from you. I hope you are a fan of golden showers as oh boy, the golden haired harlot of the Underground Student Council will have you wincing as she slices your mushroom, slice by slice.

I may be a fan of Prison School, and this is now my second viewing, however, this time is different. This time, I can hear what some slightly deranged voice actors can deliver when they are given time, liquor and a chance to have fun. I heard some of the trailers, and the English dub has delivered. Hana especially is exquisitely done. Her actor has gotten the balance between cute and psychotic down just perfectly. Not bad for the second best character...

Prison School is a series whose premise seems utterly barmy. I mean, what kind of school administrator installs a maximum security prison in the large school courtyard? I can’t see what the academic purpose is of such a facility, but they have one. Yet, the whole Prison Break storyline, combined with the excellent manipulation of the idiotic male prisoners by the genius triumvirate of the Underground Student Council balances the tension and the comedy perfectly. Best served on a warm summer’s night, when you are sweating and glistening like Meiko, with a nice cool alcoholic beverage.

On another side note, Prison School is offered as a Collector’s Edition which includes both a nice lenticular cover of Meiko’s massive milkers, as well as a nice collector’s book which provides full character background material and artwork, all serviced in a jolly nice slim box. Its rather pretty actually, and for those who are after a no-thinking prison buddy comedy, Prison School is definitely a series to check out, especially in English.

9
To some school was a prison; in this case, it's more literal.
COMMENT AND DISCUSS
blog comments powered by Disqus