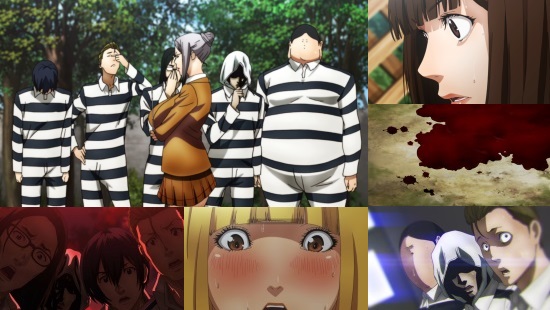 For many, school can seem like a prison - for Kiyoshi and his rag-tag group of friends, this becomes a reality. As the only group of boys in a former all-girls school, Kiyoshi and his four friends feel isolated from the female student body and take matters into their own hands to get to know them better. Unfortunately their method is too extreme and has severe consequences. After being caught peeping on the girls baths, Kiyoshi and his friends are given an ultimatum: spend a month in the school prison or face expulsion. Rather than face the shame of admitting their misdeed and taking the consequences, they choose to atone in the school prison system. However they didn't expect harsh physical labour, severe beatings and abuse from the student council who act as the prison's wardens. Thus begins the group's endeavour to tough out the harsh prison environment and stave off the student council's various attempts to get them expelled.

Prison School quickly establishes itself as a vulgar, over-the-top comedy using physical humour as its main method of delivering laughs. This physical comedy comes in various forms, the most prevalent of which being the beatings the cast members receive from the all of the female student council. Whilst some of the beatings the cast members receive at times borders on excessive, the saving grace of this being outright harassment is the fact that the male characters seem to like it to a somewhat shocking degree. At times, this makes things really awkward in Prison School as the characters will be beaten in severe ways and will then ask for more, smile or have other characters complain that it's not happening to them. In a way it seems like a necessary measure to take with the series - if the characters complained and didn't act this way it would completely change the entire tone of the show. The series also has a real fascination with toilet humour, the likes of which feels like it was borrowed from a Hollywood gross-out comedy. There is one recurring joke revolving around two certain characters that crops up from time to time that is pretty extreme in this sense.

With this, the comedy in Prison School - while vulgar and rude - somehow works, proving to be very awkward to watch but funny at the same time. This is the kind of humour you laugh at but then feel guilty about immediately afterwards. Tied into this is a fan service angle. Since there is a large female cast there are the various angles, shots and moments one would expect from such a series, taken further by integrating it into the position of power the female characters have over the male cast which leads it into sado-masochistic territory. Given the goofy tone of the show it somehow works well and gives the whole show a certain style and charm. One thing that the show is not is shy - its a crass, bold show that fully embraces what it is and delivers everything that it intends to.

That said, the plot of the show is actually rather engaging. For the most part so far things have revolved around planning a breakout and the student council putting a plan in motion in the hopes to get the male students expelled. Whilst this kind of plot is redolent of many prison dramas, the absurdity of the situation keeps things engaging. With that however, the show does fall into several clichés born of this type of show, such as discord amongst the group growing, the presence of a snitch and orchestrated events by characters with the intent of getting the prisoners in trouble. Whilst other prison dramas handle these things seriously, Prison School uses its style to put a fresh spin on it. Having the series set in a high school leads the way towards some rather interesting developments.

In a nutshell, Prison School is a loud, crude and vulgar comedy that somehow manages to have an engaging plot mixed in for good measure. Whilst most of the cast are there simply to provide laughs, it can be said that the series manages to tie it all together in a very stylish - if at times clumsily awkward - package.

You can currently watch Prison School in streaming form on Viewster.

8
Rude, crass and a lot of fun. A criminally good series.
COMMENT AND DISCUSS
blog comments powered by Disqus