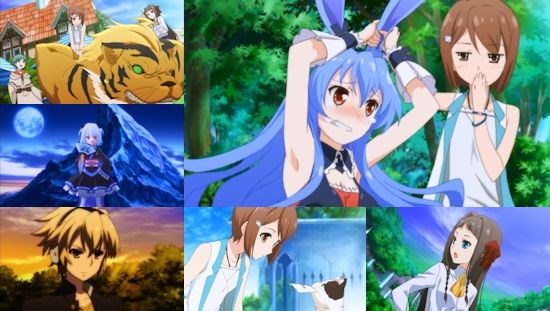 No matter how old you get, receiving an unexpected letter can always bring some excitement to your day, even if you know that inevitably it'll turn out to be either a bill for something or some kind of junk mail. Unfortunately, I doubt any of us can reliably claim to have received an invitation to travel to another world and dimension by some mysterious entity however - let's be honest, even if you did you'd be as likely to respond as if a Nigerian prince started offering you money.

Thankfully, the trio of titular "problem children" who star in this currently streaming series from Anime on Demand aren't quite so cynical, and thus their acceptance of said letters sees them immediately transported into a kind of Alice in Wonderland-esque dimension known as Little Garden where humans live alongside demons, spirits, animals and various odd blends of those elements.

The three kids in question - delinquent Izayoi Sakamaki, spoiled Asuka Kudou and quietly demanding You Kasukabe - arrive in this strange new land at the behest of a literal bunny girl who refers to herself as Black Rabbit, promising the trio an opportunity to use their very unique (inhumanly unique, in fact) skills within this world as part of the so-called "Gift Games", in which individuals can bet against one another to compete in tasks with potentially rich rewards.

There is, however, more to Black Rabbit's sales pitch than this, and unfortunately for her these three newcomers are quick to pick up on the fact that she's hiding something. The truth is soon revealed thus - Black Rabbit is part of a community that is down on their luck and in dire straits, having literally lost everything as part of the Gift Games to the point where their group no longer even have a name or symbol to call their own. Given the less than glowing introduction our three protagonists have been granted, you might expect them to walk away at this point, especially given that there are seemingly more tempting offers on the table, but no - instead, they all vow to join Black Rabbit in helping to restore the fortunes of their community using their not insubstantial powers, even if that means taking on gods head-to-head.

From there, the scene is set for our problem children to take on all-comers, from the friendly to the downright nasty (and with a clear tendency towards the latter) as Black Rabbit's hotch-potch community looks to build from nothing. It's actually hard to find a whole lot to say about the series beyond that - it does everything with plenty of enthusiasm and a fair amount of verve, but none of it proves to be particularly engaging. The three kids all have interesting powers, but they aren't used in particularly interesting or surprising ways, and perhaps more fundamentally for a series title "Problem Children" there really isn't anything particularly problematic at all about their behaviour at this early stage in proceedings.

Visually, the show has a certain draw to it - a lot of its backdrops and ideas are pretty predictable, but there are some great character designs to be found and the overall aesthetic is pleasing on the eye. There are also some decent voice acting turns to be found together with catchy opening and ending credit themes and animation - there's certainly no lack of polish to the show's production for a most part.

From a reviewer's point of view, it's frustrating not to be able to pin down precisely what it is that makes Problem Children such a mediocre viewing experience - it seems to have its hart in the right place and decent ideas in his locker, but the execution of them is frankly boring for the most part. Between the problem children who really aren't and are too ill-defined as characters, and the fact that the "being drawn into a magical world to help improve it in the name of justice" concept isn't exactly a new or innovative one, I guess it ultimately comes down to the fact that there's nothing here to surprise you or hook you into the plight of any of its characters. Without such hooks, Problem Children is ultimately a forgettable effort judging by these early episodes - not the biggest sin for a streaming show that has the potential to offer spontaneous, throwaway entertainment, but hardly a ringing endorsement of its abilities either.

Problem Children is currently available in streaming form via Anime on Demand.

5
It has a decent concept and visuals to work with, but these early episodes of Problem Children are too boring and bereft of any material to hook you into its world.
LATEST REVIEWS