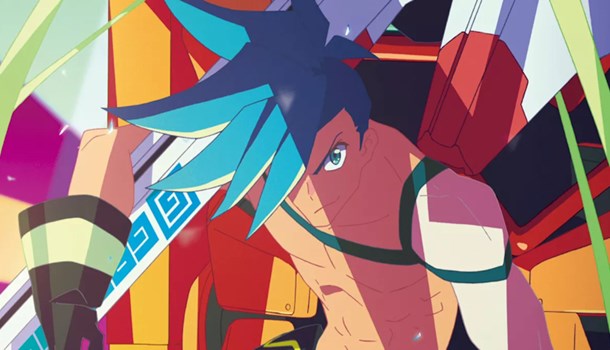 From Studio Trigger, who bought us Gurren Lagann, Kill la Kill and Panty and Stocking comes Promare, a film about a subset of humans known as Burnish that, thirty years prior to the story, have developed flame powers and are able to self combust.

To combat the burnish threat and manage the damage they cause, a special fire fighting group called Burning Rescue is formed. A run-in with a Burnish terrorist group and it's leader, Lion, will cause a rookie Fire Fighter called Galo to question everything he knew about fire fighting.

Studio Trigger's reputation of creating bold, in-your-face and dynamic anime which oozes style creates plenty of expectation on the team to deliver, and thankfully Promare delivers. In fact it takes the Trigger style and formula and cranks it up to eleven.

Promars is a film that starts off guns blazing, slowing down only occasionally to catch its breath between big dynamic set piece moments. Loud, colourful and effortlessly cool, the film features a great blend of colourful backdrops mixed with strong primary shapes, providing the film with a unique aesthetic. The city, ice and fire fighters designs are based on squares, whilst triangles are used for fire and the Burnish. The flames of the burnish don't burn orange but a rather cool neon green and purple. It's beautifully thought out with a firm grip on it's bold, stylistic choices.

The animation is smooth, coupled with energetic direction making use of great cinematography and camera angles. From mechs running along buildings through to hand-to-hand fights, everything feels elegant and fluid. The action in Promare is top-notch, conveying serious drama, danger and, at times, just the right amount of trademark Trigger silliness. The studio are using all their stylistic tricks here, like the names appearing as objects in the world like in Kill la kill, and mechs changing forms as they do in Gurren Lagann. No matter how wacky things get, it feels a natural part of the beautiful world that's presented within the story.

Things move at a great pace, only slowing down for exposition and to add layers to the story. The plot is pretty standard, but has a crazy reveal that comes out of nowhere - nothing new for Trigger, but the confidence of the presentation means I can forgive it without grumbling. If  there's a complaint, it's that the side characters are never really fleshed out beyond their roles, ceding most of the screentime to Galo and Lion. Thankfully Galo has enough screen presence to carry the story and Lion steals the show.

For the purposes of this review, I watched Promare on Screen Anime with the dub. I'd seen it subtitled at Scotland Loves Anime last year, and both presentations are great. The English dub does have quite a few more noticeable fire and burning related puns but these aren't a bad thing, adding as they do additional.comedy and fun into the dialogue. Whatever way you choose to watch, you'll get a great experience.

I know this review feels a bit short but this film is something that needs to be experienced. Promare is huge fun, an insane thrill ride of an action film that has the distinct Trigger hallmarks all over it.

Promare is being streamed on Screen Anime until 25th June 2020