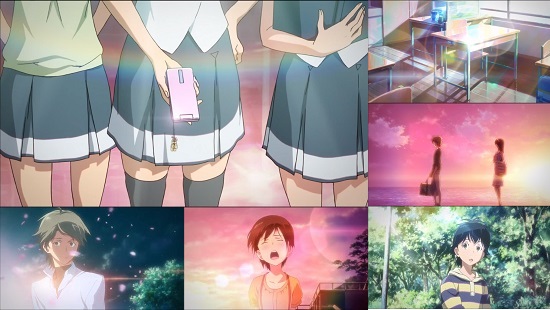 From its Edinburgh screening at 2012's Scotland Loves Anime, Psychic School Wars has built up quite the reputation. Unfortunately I was not able to attend this screening so have not been able to experience this film until now, but in the past I'd been warned about this movie and heard some rather mixed points of view which have actually stoked my curiosity but at the same time left me with an apprehensive feeling before watching.

Like most anime set in a high school, things start with the arrival of a mysterious transfer student, Ryoichi Kyogoku, who makes it clear that he truly is mysterious in more ways than one. When not at school, Kyogoku is seen by the seaside, staring at the moon and conversing with a mysterious talking fox-like creature regarding the world and the people in it. His sudden introduction changes the dynamic in an established love triangle between the movie's main protagonist – Kenji, his childhood friend Natsuki and his crush Kahori. While the film plays out as a coming of age romance drama it also mixes in a science fiction element that revolves around the student body changing attitudes towards a certain new rule that has come into force - events which lead to the titular psychic school wars.

For the most part Psychic School Wars plays out as one long heated debate on whether or not school children should be able to bring mobile phones to school. The film begins with the student body discussing the recent ban on being able to bring such devices to school. Many of the students argue that phones are such an integral part of life now that banning a teenager from having their phone is ridiculous. This argument is the main driving force of Psychic School Wars' main theme about how people are connected with each other and how communication between people is changing. This concept itself would seem far more interesting and would be a good catalyst for the events that follow in the movie if not for the fact it goes on for almost half the runtime before anything else of significance actually happens. From this discussion on banning on mobile phones there are brief snippets of dialogue that suggest the ban has come into effect due to an incident that recently happened, which in turn has caused a student to repeat a year of school. The incident itself is never actually fully discussed, leaving the viewer to speculate on what actually transpired - a narrative choice that actually says quite a lot about the key moments of the movie itself.

The film clearly assumes that the viewer has understanding of the source material that this film is built on, so leaves things rather vague with regards to relationships between some of the key characters and the details surrounding their significance. This makes the film a bit hard to follow at times due a constant sense of feeling like you were supposed to be informed of something but the film has either forgotten to tell you about it or has done so in an incredibly subtle way that will be lost on the majority of viewers picking this film up for the first time.

The way the story transition is handled is also rather clumsy and messy. The point about the mobile phones takes far too long to address and it feels like the film is constantly battering home the point that phones are bad and people should talk to each other in a more natural way rather than being dependent on a device to do so. Also tied into this is the argument that, while phones and to an extent social media and the Internet allow us to connect with more people and be in a constant state of communication, it is not the same as taking the time to talk to someone and build a deeper connection. This all leads up to a big confrontation in the end regarding the situation, and it also acts as the basis for how the student body changes. The handling of this feels a bit long-winded as to how things arrive at this point and could have been done in half the time, making the whole process of the movie's introduction feel a bit overwrought.

That being said, there are a few things about Psychic School Wars that make it enjoyable. For starters it's a beautiful looking film, with very detailed backgrounds and stunning views that are very picturesque. While the film does go a bit overboard with lens flare and sakura petals, for those wanting to marvel at a film on a visual level then this is a definite contender. There are also a few moments of comedy dotted around here and there that are genuinely funny. This mainly ties into the romance aspect of the show, where the relationship between Kenji and Natsuki is possibly the best aspect of the film's comedy and romance. For those drawn to the film based on it's romance aspect, the film is a passable teen love story. As for science fiction, it falls rather flat due to a very subtle hint of it throughout with just a few moments cropping out of nowhere.

Overall, Psychic School Wars is a very hard film to judge. On the one hand it offers a rather nice teen romance with beautiful visuals. On the other it offers a messy and incoherent science fiction film that takes too long to get to the point as it's too busy arguing over a single point of contention. While it is a mess in terms of story telling, I didn't find it to be as terrible as I was led to believe. I actually got some enjoyment from the comedic moments, visuals and romance, and while the science fell flat and I was sick of hearing about not bringing phones to school on the whole I actually enjoyed the film to a degree.

6
A visually stunning and competent teen romance, but a lacking and clumsy science fiction film.
COMMENT AND DISCUSS
blog comments powered by Disqus