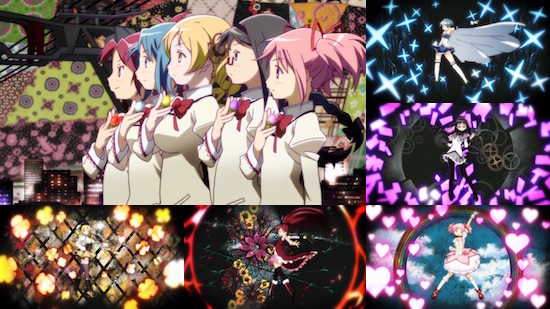 Puella Magi Madoka Magica The Movie: Part 3 - Rebellion begins with a very brief narrated introduction to remind viewers of some of the events in the series. Unfortunately for those new to the franchise, this serves only as a very gentle reminder for viewers already familiar with the series and/or recap movies - make no mistake that this is a film which relies heavily on it’s franchise’s canon, and as such watching either the original series or the previous two recap movies is essential to enjoying and understanding this film.

The film proper begins in earnest in much the same way as the series did, with a brief but surreal scene which culminates with Madoka waking as if from a dream... but was it? Much of the opening portion of this movie deliberately mirrors the beginning of the series, but with some subtle and some not-so subtle shifts. Madoka, Mami, Sayaka and Kyoko are all present, seemingly saved from their respective fates, and are now back attending high school in Mitakihara city. We also see Kyubey, the unfeeling incubator and mastermind of the girls’ predicament in the series, reduced to a mere pet. “Kyu, kyu” he utters while nuzzling up to Madoka as would a domestic cat. Homura is the new transfer student, sporting her old nerdy style of braided hair and glasses. There’s also a cute new mascot who joins to the crew, Mami’s cheese-loving friend Bebe, who sports a very familiar face.

As the movie progresses we are treated to some very stereotypical magical girl goings-on, which is very atypical for the Madoka Magica universe. The girls are happy going about their business and battling their enemies - not the witches of the series, nor even the shades of the series closing scenes, but a new enemy: nightmares. The battles are simply exquisite to behold, overshadowing even the embellished scenes from the two recap movies. In particular a one-on-one battle which occurs a little later in the movie is a staggering achievement of animation, which simply must be seen to be believed. Similarly the new transformation sequences are fan service done right, providing an almost perfect reflection of each of the girls personalities and powers without resorting to titillation. That aside, a sense of foreboding permeates every scene, one that will almost certainly have Madoka veterans wondering when the penny is going to drop and the carnage is going to begin. The series wrapped up pretty conclusively and the universe created by Madoka’s self-sacrifice is very clearly not the one Rebellion introduces us to, so what happened? Never fear, for Homura Akemi is on the case...

That is about as far as I can safely go without spilling some fairly major spoilers. Like the series before it, Rebellion is not shy with it’s twists and turns and it is therefore very difficult to discuss without mentioning spoilers. I’m going to do my best to cover the rest of the film without spoiling it, but it won’t be easy.

Rebellion takes some time to really get going. The film spends a little too long setting out it’s stall for anyone familiar with the series, and as it's incomprehensible to anyone who isn’t already familiar with its world I can’t quite fathom why it needs to take so long. The hints that something isn’t right in the seemingly ideal world Rebellion portrays are laid on thick - a little too thick - and they eventually become tiresome. Speaking of tiresome things there’s an irritatingly saccharine ritual which the girls perform to calm the nightmares involving song and cake. If you don’t cringe during that scene then you are watching the wrong magical girl show. Of course, this is the intention of this scene; to evoke thoughts of the more traditional sickly sweet magical girl shows where everything is black and white with no shades of grey, and good always defeats evil in the end.

When Rebellion hits it’s stride however it offers some of the best moments the Madoka Magica franchise has to offer, although unfortunately there are a few stumbles along the way. This is especially true towards the end of the film, and the film’s climax in particular. There has been and will continue to be much discussion about the climax of the movie - to me the results feel like a natural, if a little sinister, progression for the characters involved. The route taken to get there however isn’t quite as effective as the path the series takes to it’s conclusion, and in particular a certain pivotal event feels incongruous to the rest of the movie. Ultimately, it feels as though most of the movie exists only as a means to prolong the moment before the final revelations, when really an extra episode at the end of the series could have achieved much the same result. That makes Rebellion little more than a feature length piece of padding. Don’t misunderstand though, it is some of the best padding you will ever have seen, and this all adds up to make Rebellion a movie that you will likely not love straight of the bat, though it will almost certainly grow in your estimation the more you sit back and think about it and allow it to mature as its themes percolate in your mind.

Rebellion then is, for the most part, an excellent continuation of the Madoka Magica story. Some have argued that the ending detracts from the series as a whole, but I think that betrays a lack of understanding of the symbolism and themes of the franchise as well as the lasting effects of the series’ events on the girls and the wider Madoka Magica universe, although there could be an argument made that the ending makes much of the movie superfluous. There are a lot of religious parallels drawn in Rebellion especially in the closing chapters, so I’ll leave you with this: “The road to hell is paved with good intentions”. If you remember that as you watch Puella Magi Madoka Magica the Movie: Part 3 - Rebellion, you may very well find yourself feeling a little sympathy for the Devil.

8
An excellent, if controversial amongst fans, continuation of the Puella Magi Madoka Magica story.
COMMENT AND DISCUSS
blog comments powered by Disqus