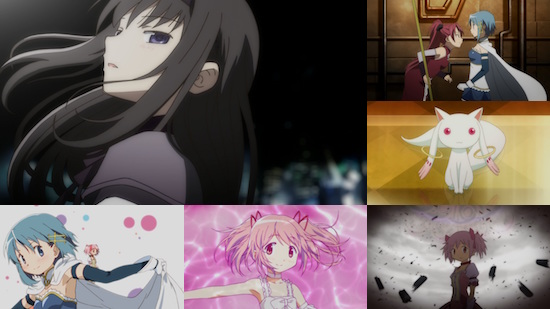 First things first: these movies are a retelling of the original Puella Magi Madoka Magica series, released on these shores by Manga Entertainment back in 2012. Though retelling is perhaps not quite the right word, as it implies there have been quite a few changes made. "Rehashing" might be a more appropriate description, as these films follow the events of the series almost verbatim.

With that in mind, what can be said about Puella Magi Madoka Magica that has not already been said a thousand times before? Our own Andy Hanley described it as “the best television anime to emerge in the 21st century so far“. Nearly everything Andy says in his review also applies to this pair of films, you should go and read it.

Puella Magi Madoka Magica The Movie Part 1: Beginnings and Part 2: Eternal can’t even be accused of condensing the series. These movies essentially are the TV series, presented almost scene for scene. There are a few cuts and additions here and there but nothing particularly major. Perhaps the most notable part of the TV series which has been left on the cutting room floor is the opening dream sequence Andy refers to at the beginning of his review of the series (you did go and read that didn’t you?). I always felt that was an excellent lead into the series, so the decision to cut it has me somewhat puzzled. It is the only thing at the beginning of the story which showed any hints of what might be to come. That scene dangled the hook of intrigue just enough to keep you watching through those difficult to love opening episodes, which seem no better than any number of run of the mill magical girl anime at first glance.

That said, from the very first hints at the true nature of the events unfolding right up to the final scenes, Puella Magi Madoka Magica never ceases in it’s relentless onslaught. Barely a scene is wasted and each one adds another layer of depth to its universe. Every new revelation adds to the drama, as each piece of the puzzle slots into place, gradually building in a crescendo of emotion towards the finale. Puella Magi Madoka Magica plays with your expectations with brutal and pinpoint precision at every turn.

Another notable change from the series is the animation, which has undergone some not inconsiderable improvement and embellishment. The animation on show in the original series was not only uniquely styled but also simply exquisite to behold. You would struggle to find better animated series, so any improvement on that can only be a good thing. You'd be hard pressed to notice on the DVD review copies we received, which look awful next to my Blu-ray copy of the series, although we have it on good authority that the Blu-ray versions are simply stunning. Puella Magi Madoka Magica The Movie Part 1: Beginnings and Part 2: Eternal are made for and best enjoyed in High Definition, so if you have yet to make the plunge into the world of HD then these may be the movies that will persuade you the upgrade is worth it. The unique animation style on show here really shows up the deficiencies of DVD as well as the advantages of the Blu-ray format.

The only questions remaining then are: which provides the better experience, the series or these movies, and whether or not the movies are worth watching if you have already seen the series? The latter question is by far the easier of the two - if you own the series there is absolutely no reason to buy these movies, as you will not be missing out on much other than some improvements to the animation. The former question however is a little more difficult, there are definite improvements over the series in terms of animation. However, there are a couple of odd decisions over things cut from the series. Overall we’d be inclined to say that the movies perhaps provide the slightly better first Puella Magi Madoka Magica experience, while anyone already familiar with the series would be better sticking with that.

8
Great movies considered alone, but they add nothing substantial over the series they are rehashing.
COMMENT AND DISCUSS
blog comments powered by Disqus