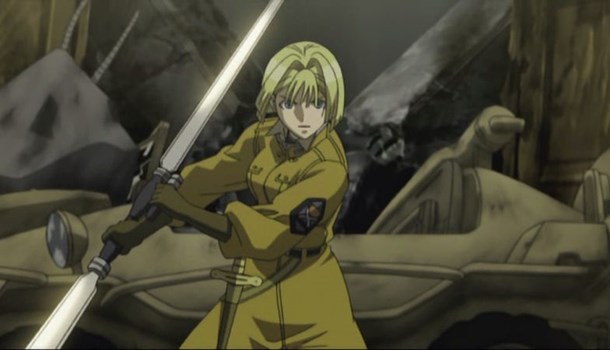 Nowadays names can be an issue for a budding creator - there are only so many to go around after all, and picking something original that will stand out from the crowd is no easy task. Occasionally someone will try the trusted technique of combining two words totally at random, and just like that a title like Pumpkin Scissors is born. Admittedly the series does make a very clumsy and roundabout attempt to justify its title but it’s clearly been a secondary thought here and we could quite easily have been watching Rhubarb Knife, Melon Fork or possibly even Pea Spoon. Fortunately a name is rarely indicative of the quality of a show, so let’s wave the white flag and head out with MVM Entertainment's re-release of this ex-ADV title.

Set after the end of a harsh war between two countries (named only as the Royal Empire and the Republic. Hmm....) the plot here follows Imperial Army State Section Three, who have the unenviable task or being to all intents and purposes a public relations team. They head the war relief effort and deal with everything from soup kitchens to re-opening routes of transport, all the while dealing with pressure from higher-ups in the army who feel the mission is a waste of time and from the common people who have no reason to trust soldiers.

Within the unit things aren’t exactly clear cut either.  Lieutenant Alice Malvin is a member of one of the most noble houses in the Empire and has a sense of honour to match, meaning that she often has to talk herself and her subordinates out of the trouble she’s gotten them into after charging in without thinking to solve the injustice she sees around her. The trouble she gets into is rivalled only by that of Corporal Oland, the squad's newest member and a seemingly invincible giant with a hidden past spent killing in the war. Between them the squad has its hands full as they’re torn from their comfortable relief missions to deal with corrupt nobles, war criminals and new high-tech weapons shipments.

As set-ups go it’s not too bad, but sadly it’s not all fun and games when the show starts running. In fact the terrible words ‘average’ and ‘unmemorable’ were swimming around in my head whilst I was watching the show, which is never a good sign. It’s a real shame too as the series does show a lot of potential in some episodes and it feels like it could have been a great political thriller with the squad stuck in the middle of corrupt officials and rebels whilst Alice tries to find a balance between her noble heritage and her morals, but instead the need to keep the action coming dilutes most of this and what you’re left with feels very much like a rip-off of the first few episodes of Fullmetal Alchemist, just replacing Ed and Al with the Pumpkin Scissors team.

The action scenes have no tension to them as you know that you’re just waiting for Orland to open his magical blue lantern (those blue LEDs get into everything - Ed) that turns him into Wolverine-lite, and then victory is assured. It’s annoying as there are some great set-ups for the action as the squad comes up against their first encounter with automatic rifles, new tanks and a huge Big Daddy from Bioshock wannabe with a flamethrower. There is an underlying plot about what Orland is and why he is that way, and whilst there are hints that this may be building to something you’re never going to find out what as it's all tied up in the original manga that’s still running - rather than investment in the story you just end up frustrated and wishing they hadn’t bothered. Equally out-of-place is the start of a romance between Alice and Oland which comes pretty much out of nowhere over the course of the last few episodes; again we’re left with no resolution. I do have to throw some credit to the production team for not pulling the usual trick of making up their own ending but it should surely have crossed their minds that they should resolve at least a couple of the plot threads that are left dangling by the end of the series, which essentially just stops rather than ending.

Visually the show is very middle-of-the-road and there’s literally nothing that you can say about it. At best it feels like a graduation piece I suppose, something given to newer staffers to show what they could do. A quick look at the other series of the time reveals that most of GONZO’s cash would likely have been going to the much more visually sumptuous titles that were in development/release at the same time like Gankutsuou or even Red Garden. It’s a passable effort, but like most things about the series you won’t be thinking about it much or designing your Alice cosplay whilst you watch. This goes for the music too, which I couldn’t even hum for you after listening to twenty-four episodes of it.

I will clarify that Pumpkin Scissors is not bad, and on no level could you call it a bad show outright. However, there are often times when being bad is preferable to being average - people remember a bad show, they talk about it even if only to laugh. An average series like Pumpkin Scissors is just destined to lay on shelves gathering dust whilst people forget it even existed even if they did buy it, and one suspects that this licence was only picked up as part of a deal for other better titles anyway. Given this, I’d strongly recommend letting Section 3 enjoy their quiet retirement and save your cash for one of the legion of other releases out this year.

English 5.1 and Japanese stereo audio with English subtitles.  This release is otherwise free of any extras.