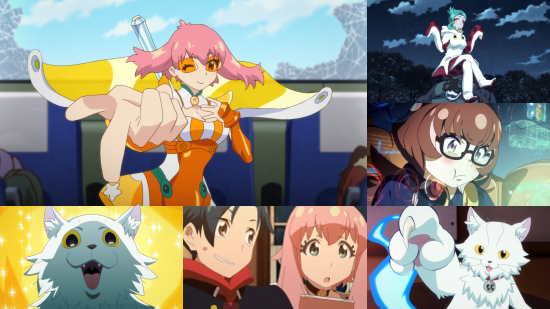 First impressions are important. The first episode of an anime series, or in fact any TV series, needs to set the tone for the entire series from that point onwards. It’s only fair, otherwise how would people like me decide whether a series is worth watching.

So, you can probably imagine the thoughts I was having when the first episode of Punch Line graced my screen. With our main protagonist, Yuta, having a strange superpower whereby if he gazes on the lilac lingerie of any lady, he will immediately gain super human strength. But... if he gazes on them again while he is super powered, the world will be destroyed. “Ahh yes”, I thought, “Another pervy anime. Just what the doctor ordered.” To be fair, I wanted panties, and I got Panty Line. But what I didn’t expect was for the series to go full Steins;Gate and completely change tack, dragging me into a deeper and more intertwining story which would encompass decades of history, a complex plot to destroy the world, and the secret relationship between three friends who grew up together. In short, I didn’t expect Punch Line to actually be this good.

Ignoring the panties for a moment, Punch Line is a combination of a slice-of-life series involving five house mates who live together in Korai House and perhaps one of the most deranged end-of-the-world series I have seen since I sat through 20th Century Boys. So, we know that for some reason panties destroy the Earth using a giant asteroid, but perhaps we should have a closer look at some of the characters involved.

First and foremost, is Strange Juice - a superhero of justice who uses a giant steel straw and her ludicrous super strength to strike painful justice into villains. Mikatan by day, she is best known for baking apple and cinnamon pies, cinnamon tea, and being incessantly perky. Her super power tends to cause her hair and eyes to glow, which is strangely similar to Yuta’s panty-led transformation.

Meica, or Pumpkin Chair as she's also known, is a technological hacker whizz kid and the companion to Strange juice. Meica just happens to have a small fusion reactor inside her body, and her body just happens to be completely mechanical. Created by the owner of the Korai house she is almost the unofficial mother of the various girls living under the house’s roof.

Rabura is a semi-successful spiritual medium and philanderer. Perhaps the only adult in the place, she has the mind and libido of a teenager, and is completely cracked.

Ito is an odd one. She seems like your normal withdrawn gamer girl, but she has a dark side which we get to see later on. Obsessed with a massive mecha game, she quickly finds herself the mommy for a baby bear rescued from an evil laboratory, which is cute.

As you can probably tell, Punch Line starts as a bit of a comedy. This comedic aspect decreases quite quickly as the series progresses and the back story about a bus bombing, the attacks on the Korai house, and the secret behind Yuta and Mikatan’s powers becomes less of a secret and more developed. In fact, the series changes so much it feels like at times the writers forget that the panty super-power trope exists, as Yuta manages to gain his powers without gazing on the opalescent beauties of the panty lines.

Punch Line also experiments quite a bit with the topic of Yuta’s gender - all is not quite what it seems here. This little development actually turns into a lovely little twist in the story much later on.

Things get complicated when the static time loop starts taking over, but it actually seems like the writers actually considered some elements of causality when they wrote the series... although if they had followed all of the rules, the ending wouldn’t quite have happened the way it did.

Punch Line was part of the noitaminA timeslot when it was originally aired in Japan, and this slot tends to be reserved for those anime which are a bit special. Punch Line is no exception. The writing and the animation quality, although suspect from first impressions, are both excellent. I honestly found myself cheering on the Korai House residents as they battled an entire anime, when they celebrated Christmas and when they went to console Ito. Any series which can tug on my heart strings like this gets a nice thumbs up from me and as a lovely bonus, the opening is just infectious. I can honestly say that it felt like the voice actors had way too much fun all the way through.

At the start, I thought that Punch Line was going to be a series which would require copious quantities of gin to survive, however the series and writing grew, the genre changed and the series evolved into one with immense depth and complexity, while retaining its panty-obsessed fun.

8
Move past the panty lines and Punch Line is crazy fun from start to end.
COMMENT AND DISCUSS
blog comments powered by Disqus