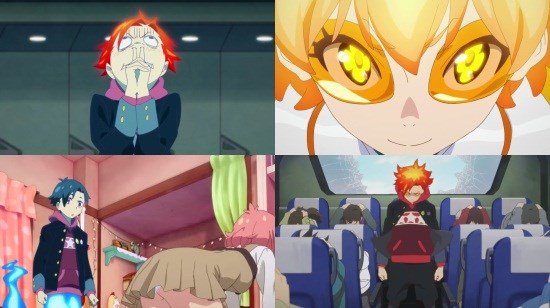 Fuji Television’s series of Noitamina branded shows have now been going for a whopping ten years (the 14th of April this year was the big birthday if you’re interested). Throughout that period they’ve had a huge success rate of bringing some truly fantastic anime to fruition such as Nodame Cantabile, Eden of the East, Psycho-Pass and Silver Spoon. Yes there have been a few duds in there as well, but overall they’ve managed to make themselves into a brand name that tends to stand for anime you’re going to want to watch. With this in mind Punch Line, their sole offering this season which started airing in the anniversary month, should have a stacked deck of positivity going for it to make sure it’s the coolest thing you’ll see this year.

Yuta Iridatsu has a bit of a problem. In fact he has several, all of them pretty serious and starting with the fact that someone’s taken control of his body and gone off joyriding (that’ll teach him to leave the keys in the ignition). This leaves Yuta as a ghost floating around his apartment complex able to interact with the world only through the power of cinnamon (don’t ask) or by looking twice at panties, whereupon he summons a giant meteor which destroys the world. It’s a good thing then that he also has the power to instantly reset the world whenever he does this, because given that he lives in an apartment block with a group of women who are more than happy to hang around in minimal clothing in front of someone they can’t see he’s going to see a lot of panties as he goes about his quest to try and recover his body. The girls in question are, as you might expect, an eccentric bunch including a robot, a superhero and a fake psychic, and things only get weirder from there once evil cults and secret pasts become involved. Its lucky for Yuta then that he has ghost cat Chiranosuke on his side using his computer to watch cat-on-cat porn...

Let’s lay our cards on the table here. Punch Line has huge potential and huge hype but ultimately this is not a good show thus far. Director Yutaka Umeru and writer Kotaro Uchikoshi are both pretty new to this business on their first and second gigs in the big chairs respectively, with few other credits to their name, and they clearly wanted to go all out here. Umeru in particular has clearly drawn on his days in the CG department for Gurren Lagann and Gunbuster 2 and decided that he wants to do crazy wacky fun stuff too, but sadly he doesn’t seem to have taken away any of the understanding of how to put this kind of show together and the end result feels like someone’s taken half a dozen of the five minute shows that are on Crunchyroll and stuck them together in a random order.

The plot isn’t cohesive, it doesn’t really make much sense or follow its own rules, the fan service isn’t in any way titillating and most criminally of all for this kind of show 99% of the gags are not in the slightest bit funny. Together that’s a death penalty for this kind of a series, which one suspects may have proved far too ambitious for its inexperienced writer and director.

It’s a real shame too as there’s clearly a lot of potential running through the shows individual components – superhero Strange Juice for example opens the series in a brilliant bus-jacking action sequence which for a moment makes you think you’re watching the next Tiger & Bunny, and the concept of a ghost tracking down what’s happened to its body is a really great idea, but these elements don’t really belong in the same show fighting for screen time amidst about fifteen other genres and plot threads. It also does need to be said that the show looks fantastic visually with studio MAPPA pulling out all the stops!

There may well be more to Punch Line further down the road – there are six episodes available to date and this review only covers the first three after all – but to be honest just sitting through the first few instalments is a bit of a slog and frankly there’s nothing there that gives you any kind of desire to see what happens next, especially given the competition that’s around this season which brings you better shows that cover everything this one does.

You can currently watch Punch Line in streaming form on Crunchyroll.

3
Sadly the punchline is that they got you to watch this show...