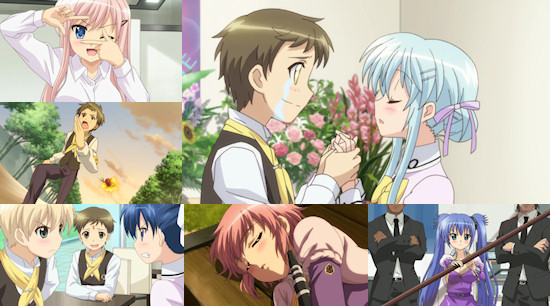 To make things worse still, the apple of Takuto's eye is Fukune Narukara, a genius with the clarinet and an innocent girl whose quiet, whiter than white exterior really wouldn't do to be corrupted by Takuto's proclivities.  Not that Takuto is exactly short of female attention - despite the supposed revulsion towards him by the girls around him, he certainly manages to get himself into some interesting pinches with them...

So there you have the major plot points of R-15 - although to be honest I could probably have just said "fan service led harem comedy" and achieved much the same result, as that's effectively what it is.  Although Takuto's love interest in Fukune is kept more than simmering through these early episodes, that doesn't stop the series throwing him into "interesting" situations with photographer Raika and genius idol Utae.

All of this is really just an excuse to throw some fan service our way, and often in a contrived fashion - although Takuto's forays into fantasy work within the framework of the show better than other similar recent examples (I'm looking at you YuruYuri), some of its other plot developments like an invention that attracts only underwear stretch things a little too far.  That isn't to say that R-15 is completely bereft of humour (it has its occasional moments), and the ludicrous nature of some of its scenarios might tickle some, but comedy probably isn't the best reason to sit down and watch this series.

Neither, ironically, is the hope of some titillation a good reason to check out R-15, so heavily censored are these TV broadcast episodes - aside from the occasional flash of panty you certainly won't be getting to see any female flesh on show here, and even on a more cerebral level none of the female characters here are really attractive unless you like the idea of a girl forcing herself upon you because she considers herself ugly or something along those lines.

This leaves us with the obvious question of "why should you watch R-15?" - ominously, it's a rather difficult question to answer.  The series is decently animated enough with striking character designs, but unless its random comedy tickles your funny bone then this is ultimately a rather wishy-washy series once it's shorn of its major selling point of letting you ogle the female form thanks to its heavy-handed censorship.  While those tactics will doubtless lead to improved Blu-Ray sales in Japan, it gives us no real reason to keep up with the show in streaming form.

You can currently watch R-15 in streaming form via Anime on Demand.

4
Occasional moments of brief comedy don't disguise the fact that this is a fan service series with the fan service censored out, which in turn leaves us hard-pressed to think of reasons to watch R-15.
COMMENT AND DISCUSS
blog comments powered by Disqus