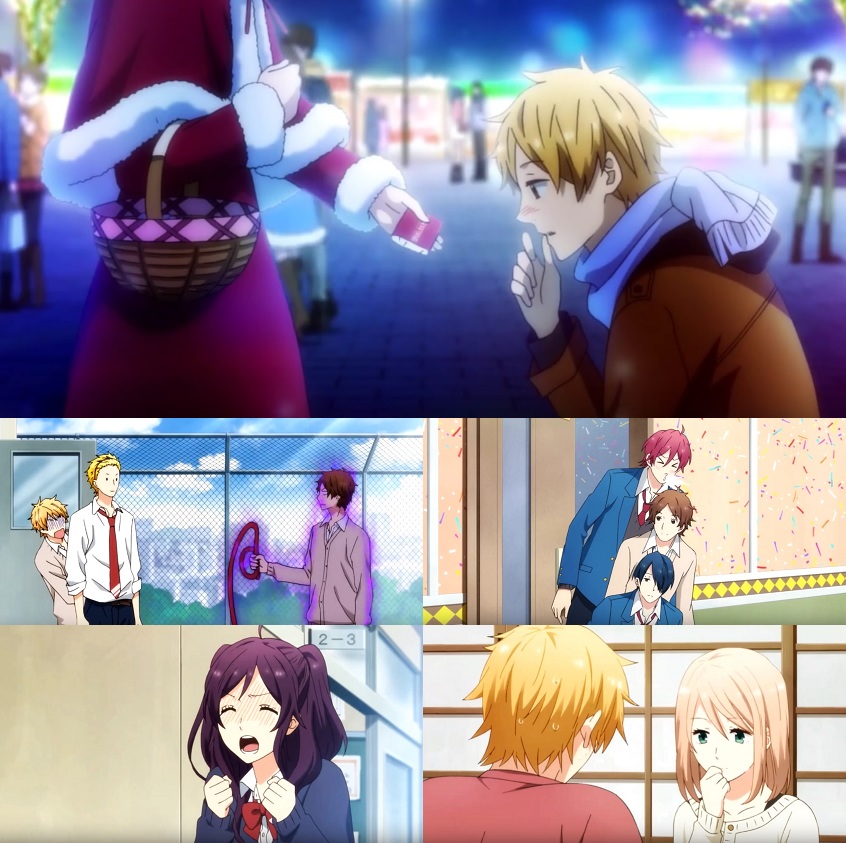 Rainbow Days is a slice-of-life anime, a very popular genre proved by the copious amount of similarly themed shows hailing from the Land of the Rising Sun. If done well, this genre can indeed be engaging and entertaining – with the emphasis on if.

Rainbow Days revolves around four male friends in high school: Natsuki Hashiba (Natcchan) the hopeless romantic unable to confess his love; Tomoya Matsunaga (Mattsun) the narcissistic playboy; Tsuyoshi Naoe (Tsuyopon) the silent smart guy; and Keiichi Katakura (Keii-chan), the cheerful one. Keii-chan is outspoken about having sadistic fetishes and carries a whip around. His sexual preferences don’t greatly contribute to the storyline (yet) and isn't even so much as entertaining, but at least brings something slightly different to the table amongst his overly stereotypical friends, however uninteresting.

The story revolves mainly around Natcchan, who gets dumped on Christmas Eve and is seen sobbing on a busy street at the start of the series. A girl dressed in a skimpy Santa outfit, handing out tissues to promote a karaoke-bar, hands him one of the tissues. Apparently this is a perfect base for eternal love, because despite being dumped only hours beforehand Natcchan instantly falls in love with the stranger.

The series then shifts to the boys’ high school, where Natcchan soon finds out the identity of the kind stranger who handed him a tissue for his tears. The target of his affection is revealed to be named Anna. Anna is your standard impassive character with the token annoying best friend named Mari circling around her. Mari is your average loudmouth, dominant-but-secretly-insecure character, who goes to extremes to keep Anna to herself. For example, stealing chocolates that are meant for Anna to throw them in the trash, and crying obnoxiously loudly when her best friend socializes with guys.

The mediocre storyline holds many clichés. Being blatantly misogynistic, Mari predictably attracts the attention of womanizer Mattsun, where Anna is of course targeted by Nattchan. Conveniently, Anna also instantly fell for Nattchan when she met him sobbing in the streets, but being a stoic archetype she keeps this to herself. Unsurprisingly, Keii-chan struggles to find romance because of his sadistic tendencies. Tsyyopon is the only one with a girlfriend, but threatens to break up with her in only episode three because she dyed her hair a different colour. The main subject of the story is Nattchan trying to court Anna, with his friends helping and advising him along the way.

The series is riddled with misunderstandings and situations that would have very easily been solved if characters would just talk to each other. Needless to say these situations are meant for comedic relief, but fail in becoming funny, instead becoming tiresome after the umpteenth gag.

The animation is also average – sufficient, but standard.

Despite frequently visiting the karaoke bar where Anna works, there isn’t much music in Rainbow Days. We hear someone bursting out in song once every (while every once in a while), but background music is rare. Personally, I didn’t mind the minimal music use, but to some the waterfall of words may feel excessive without it.

Contrary to what the name suggests, Rainbow Days isn't a vivid series with colourful characters. Instead, it dabbles in overused clichés, providing a predictable plot with average art. Combined with a mix of bland characters and overall lack of humour, Rainbow Days is easily dismissed and forgotten.

You can watch Rainbow Days in streaming form on FunimationNOW.

5
Despite its name, Rainbow Days is quite bleak.
COMMENT AND DISCUSS
blog comments powered by Disqus