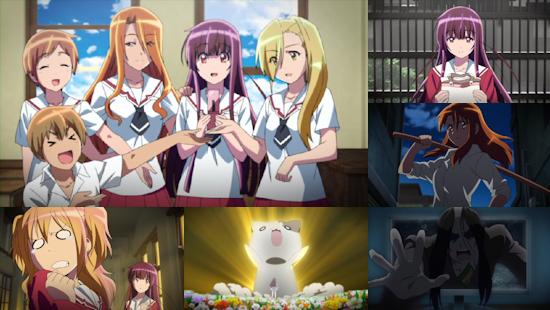 It's probably fair to say that, for the most part, ghosts have gotten a bad rap in popular culture. Almost everywhere you look they're roaming around haunting, terrifying and perpetuating violence against the living - a malicious influence to be "busted" as soon as possible. But what if these poor spectres are just misunderstood? If only there was someone who could stop to have a chat with them, give them some TLC and find out what makes them tick.

Well, allow me to introduce Hibiki Amami, a girl with a sixth sense (Re-Kan translates directly into Sixth Sense, an English title not used for obvious reasons) that allows her to see and communicate with the various ethereal entities which seem to lurk in every nook and cranny of her world. Rather than being terrified by their presence, the air-headed Amami is actually quite happy to stop and chat with her acquaintances from the spirit world, leave them offerings of food and help them out as best she can.

The trouble is that as happy as she is to go out of her way to help the ghosts in her vicinity, her behaviour looks more than a little strange to others as she talks and gesticulates to thin air, and indeed becomes outright alarming as items are thrown around or Amami herself is dragged off by unseen forces. This isn't exactly the best way to make friends as a new transfer student at high school, and so Amami initially struggles to get along with anyone from the world of the living.

However, serendepity and a certain ditzy charm eventually allows our protagonist to fall in with a group of her classmates, perhaps most notably the decidedly tsundere Inoue who hates the supernatural - and by extension Amami - but ultimately warms to her. So, the scene is set for a situation comedy that takes the usual, everyday elements you'd expect from a slice of life series - school festivals et al - but overlays plenty of ghostly goings-on atop them.

Make no mistake, at times this juxtaposition of elements can work really well - the way the series blends its cutesy exterior with classic horror imagery from time to time is a lot of fun, and of course there's some emotional weight that the show can drill into given Amami's dealings with the dead that occasionally hits the mark. The show also uses its subject matter to bolster its character roster over the course of the series, with Amami meeting more ghosts of various stripes that turn into regulars within the cast that surrounds her.

The problem is that there isn't really enough to any of this to sustain the series across thirteen episodes - specifically, most of its stories feel like they could have been handled in half the running time, so every episode is left to feel like it's dragging its heels substantially. Had the show split each episode into two half-length stories one suspects it would have felt far punchier without each segment outstaying its welcome, but as it is you're far too often left trying to fend off boredom as a storyline grinds through to its often heavily telegraphed climax.

Perhaps this wouldn't be such an issue if the show's comedy was sharper, but it often falls into a rut of its own. Once Re-Kan has set up the broad strokes of each member of the cast and their personalities it begins to hammer on those same jokes incessantly, which is dull in some cases and downright infuriating in others. Yes, well done, you've made a character who is insufferable to the point where the rest of the cast invokes violence against him, but guess what? His utterances are just as insufferable to the viewer too. There are some laughs to be had from the show, but there are nowhere near enough of them to justify the price of entry. The same can be said for Re-Kan's emotional content - it can be effective, but that efficacy is often diluted by being dragged out too long and by the end of the series its final flourish ultimately ends up feeling too maudlin to be memorable.

Unfortunately the series is equally unremarkable in terms of its presentation. There's little to catch the eye from an animation standpoint as the show looks fine but similar to so many other run-of-the-mill anime (perhaps not helped by our reviewing the DVD edition of the show, which doesn't exactly boast the best transfer in the world), its music is just as predictable, and its voice cast for this subtitle-only release do the job soundly but little more. Subtitles are all present and correct here (complete with an occasional translation note here and there), so we have no complaints on that front.

When push comes to shove, Re-Kan exists very much in the realms of anime series that are "just okay" - there's nothing particularly wrong with it and it doesn't make any major missteps beyond its pacing, but similarly nothing stands out that allows you to really get your hooks into the show or its cast. That makes the series a hard sell on home video - it's a pleasant little series, but it feels like too much of what could have made it stand out in a crowded segment of the anime market is wasted to leave us with a mostly mediocre offering.

6
Its humour or human drama occasionally hit the mark, but with storylines that outstay their welcome and a lack of interesting characters Re-Kan never manages to reach for the heavens and remains tethered to this mortal coil.
COMMENT AND DISCUSS
blog comments powered by Disqus