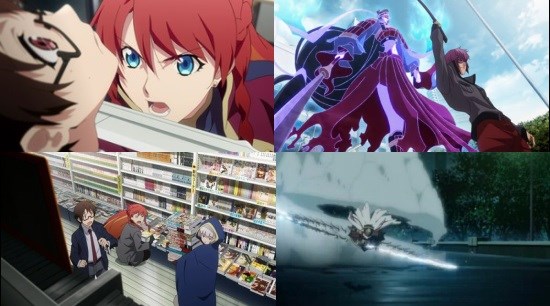 Troyca is a relatively new anime studio created in 2013 and they’ve spent most of that time beavering quietly away in the background doing in-betweens for other companies. They have only three series to their name as the main production company – the.... "divisive" Aldnoah Zero, the fun but muddled Beautiful Bones, and now this season's Re:Creators. They do say that the third time’s the charm so can Troyca make the switch into the big league or is it back to basics again?

Sota is a high school otaku who wishes he could work in the industry himself. Fortunately then, its him that anime/light novel character Selesia meets after she’s forcibly dragged from her world into ours by a mysterious young girl with a penchant for throwing magical swords at people. Uncertain of just how or why she’s in our world Selesia must rely on Sota’s knowledge of her, and more importantly of the very people who created her, who might just be able to figure out what’s going on and help her survive and return home. It’s not going to be easy either as characters from a variety of light novels, games and anime are starting to spring into our world and not all of them are inclined to be particularly peaceful.

So, is what we have here Fate/stay Night but with anime characters instead of historical figures? How on Earth did it take someone so long to come up with this idea? Probably not long at all if we’re being honest, but it probably took a while for people to work out that sadly, due to the labyrinthine maze of rights licences that are involved if anyone actually wanted to use popular characters from multiple series. Instead we get the next best thing – just use very similar characters and do it yourself. It’s not hard to see the influences either – Selesia is very much like Saber for example, and magical girl Mamika might as well call herself Madoka and stop all the pretence.

There were only ever going to be two ways this series was going to go – a glorious mess or a solid but probably not great show, and Troyca have taken things down the latter route. The show is really solid fun that makes good use of its varied characters with some brilliant action scenes as magically powered characters take their fights through crowded buildings and over busy highways leaving chaos in their wake. The concepts behind the show are solidly presented as well, with good use being made of ideas like Selesia being from the anime of her series and therefore not being aware of the most recent light novel developments. Whilst it’d be great to see the show push such things even further it’s certainly a promising start.

The animation looks pretty great too, Troyca have always been solid in their other works and that continues here animation to match, varied character designs and dynamic action together with solid vocal performances from the likes of Aldnoah Zero alumni Mikako Komatsu who does a great job of putting a bit of life into what could have been another stock taciturn anime swordswoman.

Whilst there’s not enough going on here to make Re:Creators truly great (not yet at least), it stands out as a really solid show in what’s proving to be a pretty quiet season. With the action front seemingly locked up by the second seasons of Attack on Titan and My Hero Academia, the show is proving more than capable of holding its own against the big players and might even topple them if the quality keeps up for the rest of the series. Troyca have made a good ‘un, and if it continues to hold up I can’t wait to see what comes next.

You can currently watch Re:Creators in streaming form on Amazon Video.