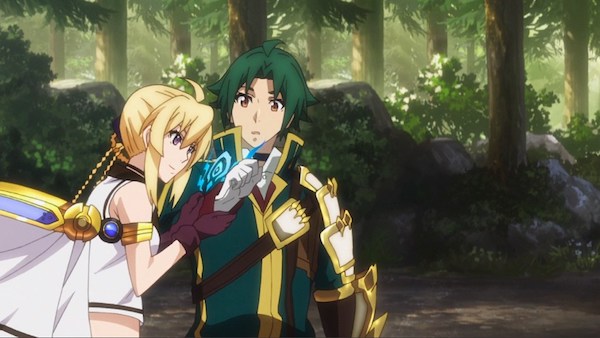 To say that there is a lot of expectation placed on Record of Grancrest War is an understatement, especially as this adaptation of the light novel series - by Record of Lodoss War creator Ryo Mizuno - is purported to take place in the world of Record of Lodoss War. However, thus far there have been no obvious references to any of the characters, places or events from that series.

Record of Grancrest War takes us away from the cursed isle of Lodoss and brings us to the continent of Atratan, a land riven by both supernatural beings - known as Chaos - and internal conflict. As the nobility from knights to kings, some of whom are granted crests (magical brands that both confirm their status and grant their wielders incredible powers), vie to defeat each other and improve their status. An attempt at uniting the two most powerful nations, the Fantasia Union and the Factory Alliance, in a marriage that would have brought about the creation of the titular Grancrest – a crest only one destined to become emperor of Atratan can wield – is undone when the rulers of both nations are murdered by a being of Chaos.

Entering into this stage is Siluca Meletes, a young mage who decides to join forces with the young knight Theo Cornaro, who strives to improve his place and save the people of his island home. Along with Irvin, a butler come close combat expert (think Walter from Helsing), Siluca plans to create the Grancrest and in so doing manipulate herself to greatness. However as she and Theo find out fate and all-too-human forces conspire to block their respective goals. From competing Lords, to personal conflict, and even Siluca's adopted father...

Animation, curtsey of A-1 Pictures, shows definite hallmarks of their quality which, while spotty in some places, improves considerably when focused on the characters and background details. However, I did note some use of some decidedly shaky CGI for the armies in the battle scenes.

This series, as Record of Lodoss War before it, wears its High fantasy roots proudly. There are epic, over-the top effects and equally over the top costumes and armour worn by the characters. Siluca at times sports a cloak that seems to be largely attached to her by gravity and Theo’s armour only covers one arm. Unlike its predecessor, which was mainly focused around the events of a small party of characters, this series' scope is much larger. Taking in the machinations of both the Union and the Alliance, as the political manoeuvrings lead, almost inevitably, towards war.

If I had any issues with the series so far it’s that the pacing feels incredibly rushed, we go from Siluca and Theo meeting each other in one episode to the next where they not only gain a castle and title but defeat (and befriend) another lord. Introducing more characters (Aishela, an oft-times psychotic fighter whose abilities come from her demon brands; the priestess Priscilla Farnese; and Siluca’s Cait Sith familiar, Sir Balgary) in one episode and then in the next battling and routing a king. All this in the length of three episodes, with little to no drama or any sense of a struggle.

Fortunately the character development, while also feeling rushed, is believable. None of the characters come across as one note personalities, but living breathing characters that over time develop from their first appearances. At first Siluca admits that she'll use any means to achieve her goals, both to show her prowess in magic and to bring about Theo's ascension, but in time she realises that her actions will have consequences, and that treating Theo as a partner rather than as pawn will achieve more favourable results.

Likewise Theo comes across at first as open-minded, almost naive, and willing to blindly do whatever Siluca asks for. All in the hope of gaining a crest powerful enough to help him to save his homeland, but in time he realises that his goals will not be so easily attained. A strong sword arm and a winning smile can only take you so far, and he will have to learn the ways of politics quickly, not just to achieve his goals but to simply survive.

As it stands Record of Grancrest War lies on a knife edge, its world building and political scheming promise an engaging story that will keep you returning for more. However the rapid pacing of the series could easily result in a rushed resolution that threatens to undo all the promise. Only time will tell which way it falls.

7
Top notch animation and enjoyable characters, however the fast pace may yet prove its undoing.
COMMENT AND DISCUSS
blog comments powered by Disqus