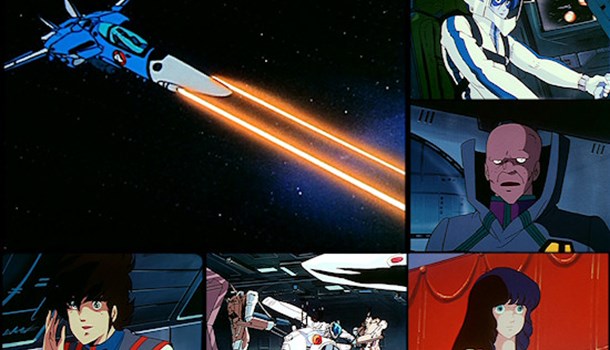 Love it or hate it (and there's little room for manoeuvre between those two polar opposites), there's little denying the influence of Robotech upon anime fandom since its introduction in the mid-1980s.  Chopping and editing together three otherwise disparate series - The Super Dimension Fortress Macross, Super Dimension Cavalry Southern Cross and Genesis Climber Mospeada - the Robotech franchise rode on the coat-tails of other successful cartoons of the era while also bringing Japanese animation to the attention of the masses for effectively the first time.

While Robotech's various iterations have been released numerous times over the years, Go Entertain's new Complete Series collection not only sets out to provide the entire eight-five episode series in a single, rather tastily packaged set (with individual series sets for each of its three story arcs also available) but also packages together four entire DVDs solely for its extras - more on that cornucopia of all things Robotech later.

First however, let's discuss this particular release of Robotech itself in its entirety, marking over twenty-five years since its original US broadcasts - split into three major arcs (The Macross Saga, The Masters Saga and The New Generation), this science fiction-cum-drama series brings us a world united by the arrival and rebuilding of a huge, crashed alien spacecraft.  Having taken both the craft and technology for themselves, humanity finds that the original owners of said craft seem less than impressed with their meddling, leading to a war against the invading Zentraedi forces with the ship in question, the SDF-1, at its core.  This sets the tone for all three arcs within the Robotech saga, as the first two series see the human race fighting off the alien invaders with an eye for the energy source known as "Protoculture", while the third sees Earth successfully invaded by the Invid race, leaving a group of freedom fighters battling to retake their planet.

Needless to say, meshing three individual anime series into one means that hefty liberties are taken with the original plots and storylines to create something which is ultimately decidedly different from those original works, although in all fairness the end result is a pretty solid one when you take into consideration its original broadcast date and the goals the series set for itself at that time.  In modern terms it feels pretty clunky and downright cheesy at times, but then again what 1980s cartoon doesn't in retrospect over two decades later?

Given the number of releases Robotech has had in the UK over the years, I won't discuss the series itself in any further depth here, but needless to say the assets used by this release are those of the remastered release from a few years ago - this ensures that video quality is about as good as you're going to get with animation of this age to make for a decidedly watchable presentation, while the audio remaster is actually pretty stupendous to give a vibrant, full-on rendition of the show's music, effects and dialogue throughout.

Where our interest is really piqued in this release is with regard to its extras, and with four DVDs packed with the stuff there's no shortage of content for Robotech aficionados (or simply those looking to learn more about the franchise) to lap up.  The biggest new feature of the bunch in this regard is Carl Macek's Robotech Universe  - part tribute to the late mastermind behind the franchise, Carl Macek, part documentary detailing the origins and making of the show, this is a great opportunity to get a feel for just what an outlandish and ultimately successful effort Robotech was for its time via interviews with the cast and crew who worked alongside Macek to make it happen.  It is, of course, a slightly rose-tinted look at the franchise and its gestation, but it's an interesting and entertaining one none the less.

Other notable extras include two original pilot episodes for Macross before it morphed into Robotech, a similar pilot for Genesis Climber Mospeada and deleted scenes from all three of the original Japanese series on which Robotech was based which never made the cut into the final product for various reasons.  Both an edited version of the Robotech: The Untold Story and the full Robotech: The Sentinels movie are also included, complete with animatics, promo reels and trailers.

If your real love is for the original Japanese series from which Robotech was derived, those aforementioned deleted scenes are also bolstered by original Japanese opening and closing credits for all three shows which sit alongside their English counterparts.  Add to this a collection of all the 1985-1986 Robotech toy commercials (complete with a promotional reel to sell the toy line to retailers), a bunch of music videos, footage from four Robotech games and a peek at how Robotech's enduring popularity is also still evident in China, and you have yourself enough bonus material to while away a day on its own even before you take into account the series itself!

For me personally, it's these extras that really turn this release from a case of "Oh, it's Robotech again" into something far more interesting and valuable - if you have an interest in Robotech then chances are you've seen the series before (quite possibly in its remastered form), so the additional value of those four discs of extras can't be over-stated.  With a £70 recommended retail price it's admittedly a big outlay for anyone who already owns the full series, but if you're yet to pick it up on DVD then the presentation and contents of this release is a great incentive to do so.  Failing that, there's always the possibility of adding it to your Christmas wish list...

English 2.0 and 5.1 audio.  The four DVDs of extras within this complete collection comprise of:

7
This won't change your mind if you hate Robotech, but for fans of the franchise this is the definitive collection of the series, and the best you're ever likely to see.
LATEST REVIEWS