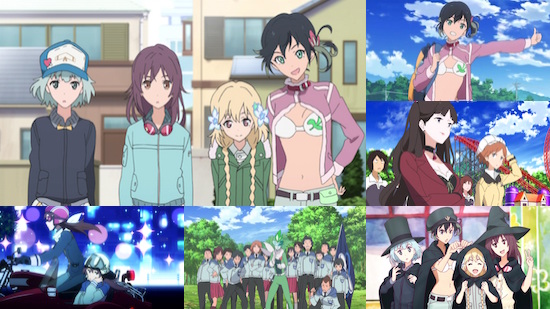 The Rolling Girls is one of several shows that we here at UK Anime had written off making itself available over here this season. This was due to the now infamous habit FUNimation Entertainment has of gobbling up UK streaming rights and then sitting on them, depriving us poor UK folks of shows that someone else, anyone else, could have graced us with. Enter stage right: Viewster, who managed to persuade FUNimation to stop sitting on some of their rights and let them stream The Rolling Girls to us poor UK folk. Kudos Viewster.

The Viewster service itself is functional, free, and arguably better than some subscription services I could mention. That’s not to say it’s perfect; far from it - the video quality is variable and the resolution seems to range from roughly DVD quality to utter garbage. There is certainly no Full HD goodness to be found here, even on my relatively beefy 76Mb FTTC Internet connection (it’s telling that the Viewster site doesn’t make any claims about resolution). The iOS app crashes frequently, especially when attempting to Airplay to an Apple TV (Viewster, if you're reading this: Any chance of a native Apple TV app?). Viewster is ad supported, and there is unfortunately no option to make the adverts go away. Unavoidable adverts are a huge black mark in my book, especially when their invocation causes a noticeable shift in stream quality, as it does here. While there is an option to setup a Viewster account, there appears to be no discernible advantage to the viewer for doing so.

Getting back to the matter at hand, then: The Rolling Girls is an original animation from WIT Studio, the folks behind Attack on Titan and HAL, although you may or may not be pleased to hear that Rolling Girls is absolutely nothing like either of those properties. The series is set ten years after the “Great Tokyo War”, which seemingly left Japan in tatters. The country subsequently split into it’s original prefectures, which became independent nations. These nations are protected by vigilante groups which compete for... well that’s not entirely clear but territory it seems, at least for the most part. Each group appears to have a champion, known as “Best”. The best are imbued with various unexplained superhuman abilities and battle under an as yet undefined (but repeatedly referenced) set of rules, known as the "Twin Tower Declaration". Backing up the best are the “Rest”, whose function seems to be mostly getting in the way of battles between rival best and cleaning up the streets. We are introduced first of all to a pair of these vigilante groups: Hiyoshi Town Propellers and Higashi Murayama, whose best Maccha Green and Kuniko Shigyou are fighting it out and seem to have something of a history. This rivalry fills much of these opening episodes’ runtime. The battles are fast, frantic, destructive, extremely colourful and fantastic fun. You can’t help but laugh as a the colourful blows from Kuniko’s giant safety pin send large groups of rests flying off into the horizon.

You’ve probably already picked up that I used a lot of qualifiers in the above description of the setting for The Rolling Girls, and that’s because the series really hasn’t defined itself very well as yet. There’s not much in the way of exposition in these first three episodes, nor is there much in the way of character development as yet either. By the end of the third episode we’ve barely been introduced to what look to be the main four main characters: Nozomi Moritomo, Yukina Kosaka, Ai Hibiki and Chiaya Misono. Whether that’s a bad thing or a good thing rather depends on where the series takes the story from here. The four girls set out at the end of episode two in search of “moonlight stones”, mysterious crystals whose purpose remains completely unexplained (though there are plenty of potential hints if you look hard enough).

Setting the lack of exposition aside for a moment, The Rolling Girls is awash with vibrancy and colour - and it is as mad as a sack of badgers to boot. There's a lot to hook your interest in these opening episodes if you can get past the vacuity of the story and just enjoy the ride. The battles are action packed, the character interaction is snappy, and there’s a slightly unhinged wit flowing through much of series. Talking about the vibrancy and colour of the series brings me full circle to discussing the Viewster service again: This is a series that would really shine with the Full HD treatment, but alas it is sullied rather by Viewster’s somewhat variable quality.

The style of the series gives the impression that someone at studio wit watched Kill la Kill and FLCL back to back and decided trying to combine the two might be a good idea. While a combination of those two utterly mad series sounds like the machinations of an insane genius and the stuff of dreams, the reality thus far is less than the sum of it’s parts. Safety pins in place of scissors and classic guitars just doesn’t quite cut it... at least not yet. In short: The Rolling Girls is mad, colourful, cute and great fun, but lacks substance - at least in these early episodes.

You can watch The Rolling Girls in streaming form on Viewster.

7
Insane, fun, cute and colourful, but it needs some more meat on the bones of its story. One to keep an eye on.
COMMENT AND DISCUSS
blog comments powered by Disqus