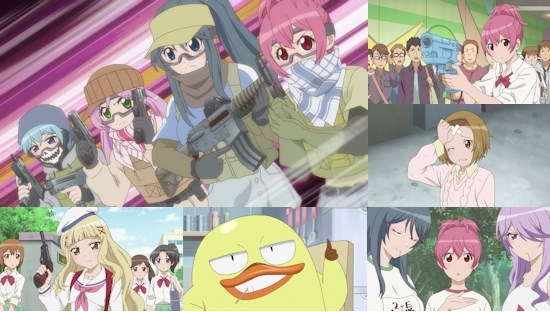 Although common sense suggests to me that your average Japanese school probably doesn't have an after-school club dedicated to Airsoft rifles or BB guns, I am beginning to wonder whether this is actually the case - certainly, recent anime series seem to be insisting that such clubs are commonplace, with last summer's Stella Women’s Academy, High School Division Class C³ from GAINAX now followed by Sabagebu this year. What's more, this series is quick to point out that it's based upon a shoujo manga, and after watching an episode or so you'll soon see why it wants to make this clear, because you certainly wouldn't have guessed otherwise.

Momoka Sonokawa, our protagonist, is trapped in that typical dilemma suffered by new students - she has no idea what club to join, and what's more she hasn't really succeeded in making any friends that might help her either pass the time or influence such a decision. Happy to accept this lot in life she might be, but everything changes when an unsavoury encounter with a molester brings her into contact with an unusual girl who has no qualms about pointing a gun at her assailant on a crowded train - a choice which might have saved Momoka, but one that leads to her being dragged away by police.

Unbeknownst to Momoka, this girl is actually one of her school's most popular, Miou Ootori, and what's more she's taken a more than a passing interest in our protagonist. In short, Mio wants Momoka to join the school's survival game club of which she's part - something which Momoka couldn't be less interested in, although the sheer amount of harrassment and bullying she finds herself party to on account of Mio's attentions leaves her reconsidering the possibilities of wielding a gun to right the wrongs committed against her. Thus, Momoka ultimately joins the survival game club, at which point we can dispense with any illusion of major, over-arching storylines - this is a gag comedy show, pure and simple. As well as Mio, the survival game club boasts a handful of other oddball characters, including the masochistic Urara and the cosplay-obsessed Kayo. Oh, and a platypus.

At this point, we know what you're thinking - "Great, another crazy after-school club comedy. Boy, we haven't had many of those before"; a thought rolling around your head, voiced in the most sarcastic voice possible. Normally, we'd probably agree with you as well - there are so many mediocre shows based around this broad premise that even a millipede would struggle to count them all, admittedly because millipedes probably can't count. However, Sabagebu works, and allow us to explain to you some of the reasons why.

For starters, the series has a narrator who adds a great deal to proceedings - his semi-serious quips and explanations add comedy to otherwise weak components of each episode to give them a boost, and the ability to have a third-party explain away some of the more nonsensical elements of the plot (such as girls collapsing in pools of blood after being shot with what are supposed to be Airsoft guns) gives the show free reign to indulge in the kind of insanity which serves it in good stead.

While there's a fair amount of joy to be had from some of the show's nutty setups - like trying to deal with a hornet's nest while the club advisor is dressed in a bear suit - perhaps its simplest joy is that it indulges in a lot of slapstick comedy, and more important it gets that slapstick right. This kind of physical comedy isn't unusual to anime, but it's disappointingly rare for a series to consistently get it right - in this sense Sabagebu is a joy, as it uses its cartoon nature to deliver some painfully violent slapstick moments that you really shouldn't laugh at, yet are utterly hilarious all the same. This probably makes me a horrible human being, but I can watch an overweight Momoka throwing one of her club colleagues across a room so that she hits her skull on a whiteboard and then cracks her head open on a nearby chair a million times and never not laugh.

This vein of comedy in the form of cruelty runs throughout the entire series - Momoka really isn't a very nice person when push comes to shove, and neither are her clubmates for the most part, but given that the interactions between the group provide such a rich vein of comedy this is to the benefit rather than the detriment of the series, even if some of this humour probably won't sit comfortably with everybody. For all of this praise we'll admit that the series thus far isn't wall-to-wall funny, and some of its setups fall flat, but there are more than enough laughs to keep each episode ticking along nicely, and none of the scenarios we've seen so far outstay their welcome.

Perhaps aiding the cartoon outlook of the series is the fact that visually speaking the series looks cheap and actually pretty terrible at times - we're perhaps being overly kind to even suggest that this should be viewed as a positive, but although the show certainly doesn't look great its colourful but simple animation still achieves everything that it needs to without any fuss, so it isn't particularly to its detriment either. The voice cast sound like they're having as much fun voicing these characters as the production staff seem to be having throwing them around, and the show's energy also proves to be infectious as a result.

I genuinely can't remember the last time I laughed so hard and frequently at an after-school club comedy series - there have been some fun shows kicking around in the rush which followed K-ON's success, but few have quite the razor-sharp, comedy-centric outlook of Sabagebu, and even fewer have the chops to pull it off so fearlessly. It doesn't look great, and the source of its jokes won't always sit well with everyone, but this is madcap, slapstick animated comedy done right - don't worry though, all the shooting and violence is just a figment of the characters imagination.

You can currently watch Sabagebu in streaming form on Crunchyroll.

7
Its violent slapstick and subject matter won't appeal to everyone, but Sabagebu thus far is a rare example of its particular brand of comedy done right, which makes it a surprise delight.
LATEST REVIEWS