Saekano -How to Raise a Boring Girlfriend- 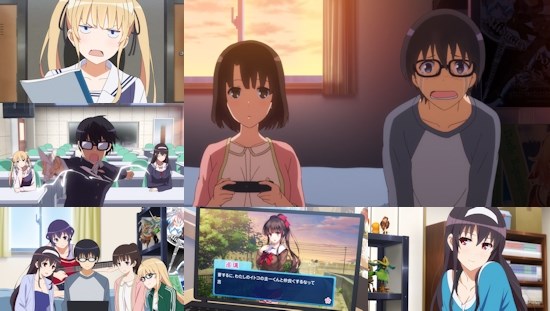 Saekano -How to Raise a Boring Girlfriend-

You probably have some understanding of what it's like to be a passionate fan of anime and related activities - you have outspoken, deep-seated opinions of the media you love; your obsession with your interests drowns out whatever else might be going on in your life; you're surrounded by a bevy of beautiful girls who inexplicably want to throw themselves at you at any given opportunity... hang on a minute, one of those descriptions doesn't seem like it belongs here.

Despite airing in Fuji Television's noitaminA block, renowned for quality works from Eden of the East to Psycho-Pass, Honey and Clover to The Tatami Galaxy, Saekano is - and let's be blunt about this - a trashy harem romantic comedy. The only thing that marks it out as a series potentially worthy of its place within this programming block is its vein of self-referential humour, which seeks to work as a meta-commentary of otaku-dom viewed through the lens of otaku pursuits themselves.

At the heart of the series is Tomoya Aki, a dyed in the wool otaku with a popular blog that marks him out as something of an arbiter of taste amongst anime fans, and also a young man with a desire to flex his own creative muscles by creating a visual novel of his very own. Of course, this isn't something one man can do alone, but it just so happens that Aki has some very notable talents close to him - a renowned writer and a prolific, respected doujinshi artists. Of course, they're both also his friends (albeit in a strangely antagonistic way) and incredibly good-looking girls, and come the end of the series you can add a musician and another artist to that mix. Of course, they're also girls who are madly in love with Aki but won't admit it to anyone.

For all of this pool of talent at his disposal however, Aki has a problem - he can't find the inspiration that he needs to create the perfect visual novel. Enter Megumi Kato - or rather, her hat, at least initially - an entirely normal girl (which this series takes to mean "boring") who catches Aki's eye and unwittingly becomes the protagonist of his game, at least in terms of the look of her character. Initially entirely apathetic towards Aki's project, Kato somehow becomes embroiled in the efforts of his and the "harem" around him... oh, and she pretty much falls in love with him somewhere along the line too. Of course she bloody does.

If you haven't guessed from this (admittedly snide on my part) synopsis, then Saekano is the worst kind of pandering otaku-bait you can find in an anime series - our "hero", no matter what he does, remains the object of lust and affection to every girl who he speaks to, and with little more than a few words he can get a band a gig, influence people or motivate someone like they've never been motivated before. Really, he's only some superpowers short of being on the same level as The Irregular at Magic High School's resident "superman" Tatsuya, and he isn't much more likeable either.

In fact, the cast of Saekano as a whole is made up largely of horrible, detestable, selfish people - its only saving grace is our resident "boring girlfriend" Kato, who is a ray of light in this darkness with her calm, disinterested demeanour and line in subtle but clear put-downs to keep the dysfunctional group around her largely in place. Beyond that, I'd hate to have any of the other major characters as a friend - they care nothing for one another, and will happily manipulate another's emotions simply to get their own way. For example, at one point the aforementioned doujinshi artist, Eri, is upset by a comment made by Aki - rather than apologising or trying to understand what bothered her so much, he instead effectively emotionally blackmails her, not to save their friendship but to ensure work continues on his game. Later, Aki goes on to manipulate his cousin, hiding his true intentions from her while her friends and bandmates also join in on this thoroughly disheartening charade.

If you stop looking at the characters in any depth and simply focus on the basics - breasts, backsides, is the "tsundere" checkbox ticked - and things are better if you're looking for a simple fan service show. Saekano does at least look appealing in terms of character designs and overall visuals, and provided you want to stare at constant shots planted at breast, crotch and ass level then this show is mana from heaven. The pre-series "episode 0" which kicked off the show's streaming run is a perfect primer for what the show has to offer in this regard, starting at a hot springs and offering up plenty of casual nudity and "almost but not quite" fan service for you to gawp at. Did I mention that this was a noitaminA show? Yeah, I'm really not sure why either, especially when its self-referential discussions on fandom and the like fall flatter than the thinnest of pancakes and leave the series looking like a smug wannabe that thinks it has all the answers but actually has nothing of value to say.

What really makes all of this galling is that you get the feeling that there's a good show screaming beneath the surface of all these negatives - Shirobako has shown us what a show revolving around a creative process can offer, and there are some genuinely good moments scattered throughout the series, largely when it's just Kato and Aki alone together without the rest of his harem getting in the way. Heck, there's even something that amounts to character progression during some of those moments, which is more than can be said of the rest of the show, which resorts to shouted, tearful exposition at best to move its characters forward.

If you haven't guessed it by this point, I hated Saekano in a way in which I very rarely feel such disdain for an anime series. Its characters are loathsome, its scenario utterly wasted and its fan service craven and uninspired despite being very accomplished visually. It's not that I have a problem with the harem setup (see my love for Nisekoi), or indeed with fan service when it's delivered in style, but Saekano reeks of laziness in its writing and characterisation, and it's that which truly holes this show beneath the surface. Not that I'd be sorry to see it sink without a trace, as I'd be quite happy to see this relegated to the bottom of the proverbial ocean when it comes to 2015's anime offerings so far.

You can currently watch Saekano -How to Raise a Boring Girlfriend- in streaming form on Crunchyroll.

2
An irredeemably lazy story of horrible characters doing awful things to one another whilst the camera fixates on their crotches.
LATEST REVIEWS