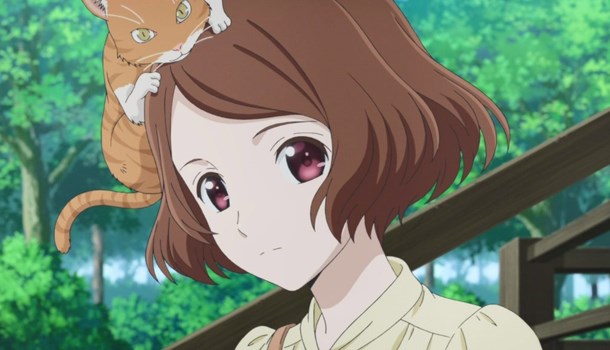 Sagrada Reset, when it appeared in my mystery bundle of blu-rays really did not look the pick of the bunch, with its partly rose-tinted cover that gave little away but was suggestive of a show veering towards the saccharine, I thought: this’ll be a watch one or two episodes before despairing and eject, eject, eject and take it to the charity shop. (Back when the shops were open and you could get out).

Imagine my surprised when it proved to be the opposite, so much so I blitzed all 24 episodes in three days. Something about Sagrada Reset grabbed me.

So what’s it all about?

Asai Kei is asked by his friend, Soma Sumire to meet a girl, Haruki Misora on the school roof. Kei has a photographic memory. Misora can reset time up to three days before, though forgets the days she has reset. Odd? Hardly, they live in the town of Sakurada where everyone has a special ability. Kei and Misora decide to work together, pool their complementary powers and help people in Sakurada. In doing so they join the Services Club, run by The Bureau, an organisation that monitors ability users in Sakurada. As Kei and Misora use their powers under the aegis of The Bureau they are pulled into something deeper…

As stories go it’s neither the most original synopsis nor the most entrancing (recognising there are some things I don’t want to give away) – a little like the Blu-ray cover – but it’s all in how you do it, and for me, Sagrada Reset did “it” well. Perhaps the show is best summed up by what it is not: it’s not riotous, any comedy if any is gentle; no harem factors are involved; no fan service, (though some small nudity); there’s little if any action. Though characters have abilities, this is no flashy superhero series.

If anything the show is extremely talky and focusses deeply on the characters’ emotions, their development and sometimes their history. It has a tone that while not sombre is sincere, reminding me in that sense of From The New World (another show with a cover poorly representing the content). For the main the show focusses on Kei and Misora and their developing relationship and bond. Misora, when we first meet her, is almost emotionally absent and what I enjoyed was how she changed slowly over time, and where the show could choose to poke fun at her – say when she disappears to try and make a friend with no idea how or even what friends do – Sagrada Reset treats her with affection. There’s a certain gentleness, almost a kindness (can you tell I’m struggling for the right adjective here?) to the series; but it's clearly one that cares about its characters and wants you to be involved and invested in them. But that involvement is likely not to be the more overly emotively wrenching type. Instead Sagrada Reset almost floats along, a little like Monogatari (though don’t compare the series except perhaps in their talkiness) does, leaving you in a semi-hypnotic state - and like Monogatari, causes you to become invested in the characters. I wanted nothing but happiness for Kei and Misora, mainly because I liked how the two characters really complemented one another. Both start as detached individuals, working together for their own reasons and their growing closeness is more implied than obvious (no grandiose declarations of love, no dramatics, no hand holding even – again, what the show is not) felt absolutely right for our protagonists. The manner in which Kei and Misora display their feelings is understated, yet at the same time you can often feel their inner questioning, the emotional undercurrents are there trickling under the surface, struggling to emerge.

Sagrada Reset manages to be charming where it could be generic, such as Misora’s indecisiveness: should she visit Kei, laid low with a cold, and cook for him? It’s all standard boy-girl fare but Sagrada Reset quietly wrings out all of Misora’s emotions, as she potters to the supermarket, has second thoughts, is needled in the right direction. You sense all her depth of emotion lying under the surface, most of which she is almost unaware of; you sense her doubt and feelings of being somehow unworthy. (Like me she is an over-thinker.) It’s quite lovely without being easy to say why.

As such I think it may bore the pants off many.

But not if you want and are willing to invest in our protagonists, enjoy the concept that abilities are just another prosaic part of the world and not treated like superpowers.

There is an overarching, well plotted story and the resolution is fitting. True the animation is not remarkable; it looks to be a modestly budgeted show. So it’s not a show that will leave you visually floored; here the colours are more muted, as is much of the voice work – and note this only has a sub, no dub – but again it suits the tone of the series. It may be muted but it’s not poor. Similarly the music that floats through the background accentuates what is being felt but is low-key, careful, unobtrusive, as it should be. Anything more would ruin the mood.

That’s not to say that the show is perfect, it’s not by any means. Some of that is minor – thanks be to the skip button – like the song that plays over the end credits for the first half of the series and the second half of the series opening: both of which are highly generic and ill-fitting (percussive driven rock and EDM-rock-lite respectively – why? Just why?). Equally some of the design for the secondary characters is a bit average and while not lazy, some of them looked so similar (same face type, same body type, same expression, same long dark hair) until they were named I struggled to tell them apart, which could break the flow of the show as you quickly skim your memory for who they were again.

Sagrada Reset, being based on seven light novels, struggled at times to always fit all the content in, to the point where suddenly you are introduced to a character and you don’t recall them at all. Are they one of those characters who looks like…? You ask yourself. Did you blink and miss them before? Often no, they are introduced from nowhere but are necessary for the overarching plot so cannot be left out, but this can feel discombobulating. Yet at the same time I rather liked it, mainly because Sagrada Reset never did the: and here’s a whole load of exposition to explain [insert whatever] piece of lazy writing. Instead Sagrada Reset allowed itself –albeit with one necessary exception – to give up its secrets and story gradually.

That said sometimes I did feel that the series had a different view of Kei than I did. Early on we’re introduced to Oka Eri, a younger girl who Kei has helped in the past and she sees Kei as being a villain (sometimes the show describes Kei as being capable of kindness and cruelty) and Sagrada Reset positions Eri as then being something of an antagonist. She wants to become him, become, in her words: a brazen villain. Yet it seems to be done more to provide Kei and Misora with a temporary antagonist when the show doesn’t really need an out and out villain. Not that Eri really is one (she’s got big eyes so surely not?!). Sagrada Reset doesn’t need a straightforward villain for the simple reason that it is so focussed on character, all you need is one person whose plans are driven by meaningful, human, if misguided emotions then you automatically have a villain who is not really a villain, just misguided - and it’s that kind of series. (Altena in Noir perhaps the best example of this.)

As you’ll have cunningly spotted I thoroughly enjoyed Sagrada Reset. I loved the quiet, warm tone of the series; I allowed myself to wallow in the gentle character development and floated along with them. I especially enjoyed the soft and slow development of Misora because though she always follows Kei’s lead, where another show may have had her seem passive, doll-like, instead she’s almost otherworldly and her understated emotions reflect her character, though currents of deeper emotions are always flickering just out of sight. Equally Kei is no superhero, he’s someone most likely to reason out a situation, not duke it out. If anything violence is anathema.

Yes, Sagrada Reset has its flaws but it seemed to me that like most of the best anime series it’s very much more than the sum of its parts and so you forgive its shortcomings and the imposition of its limited budget. Like I said, I think Sagrada Reset will bore some people insensible or just leave them moderately disengaged. But for the right person, in the right mood, though in many ways it’s nothing original, Sagrada Reset is an absolute diamond in the rough.

I returned to the series again, some compulsion made me watch it – or maybe just the long stretches of lock down time with nothing to do – and it was just as good the second time.

Yes, for those that have seen this will realise I've left out some pretty major plot elements. But that's all part of the fun of discovery, no?

8
A warm slice-of-life-super-powers story that focusses on character that I suspect will be sheer anime marmite, but worked for this viewer
LATEST REVIEWS