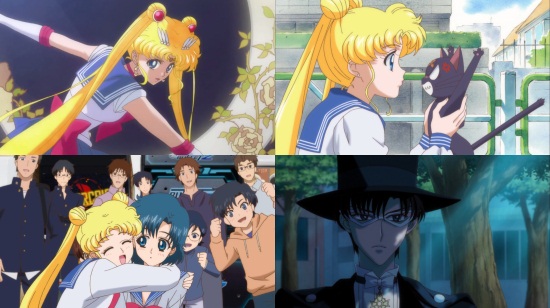 She’s one of the most instantly recognisable characters in anime, and her adventures rank up there with the likes of Robotech and Dragon Ball in terms of how many new western fans it’s introduced to the medium.  She is, of course, the "Sailor-suited Pretty Soldier of Love and Justice: Sailor Moon!" Now, 12 years on from her last animated series (the infamous Sailor Moon Stars) and 10 years on from the great (apart from Sailor Luna. We do not talk about Sailor Luna) live-action series, Sailor Moon has finally returned in animated form with Pretty Guardian Sailor Moon Crystal. Despite over a year of delays, this series is still arguably the most anticipated series there’s been for a long time, with huge expectations from a very loyal fan base. So, time to find out if Crystal can live up to expectations and become more than just a quick nostalgia trip.

Tsukino Usagi is an airheaded middle school student who spends most of her life obsessing over her twin loves of food and video games. However, when she removes a plaster from a passing cat to reveal an off-colour patch of fur in the shape of a crescent moon, her life is about to change. The cat in question is Luna, who has been sent to Earth from the long lost Moon Kingdom to seek out the princess of said kingdom along with its powerful treasure, the legendary Silver Crystal. Recognising something within Usagi, Luna grants her the ability to transform herself into Sailor Moon, a powerful warrior - or at least she would be if Usagi wasn’t a bit of a coward - to assist her. As the minions of the evil Dark Kingdom (look, names were not the manga authors strong suit, okay?) are seeking the crystal and are happy to steal the energy of any poor human that gets in the way, Usagi and Luna must quickly recruit other guardians to assist them. The first three episodes see genius Ami (Sailor Mercury) and the mysterious Rei (Sailor Mars) joining the team, and they’ll be joined later by the tomboy Makoto (Sailor Jupiter) and happy-go-lucky Minako (Sailor Venus). These aren’t particularly spoilers by the way - even if you’ve never seen the series before, the opening credits more-or-less assume you have and contain a lot of "spoilers", plus all five of the girls can be seen on almost every advert for the show. The gang will also be assisted along the way by the mysterious Tuxedo Mask who has a knack for turning up in the nick of time to save the girls, but could well be seeking the crystal for reasons of his own...

When looked at without any of the baggage that comes with it, Sailor Moon is a pretty good series. It has a cast of varied and colourful characters that are fun and entertaining (even if Usagi’s voice is painful to listen to); the story that’s been set up is a pretty classic one and it’s doing a good job of setting things up for the next twenty-odd episodes. The issue with it from this standpoint though is that this is all it is - if you had no awareness of the series this would just be a show you might watch and then more-or-less forget about because it’s tale is now so classical in nature that it doesn’t stand out anymore. Sailor Moon Crystal does things in exactly the same way it did when the series first aired almost twenty years ago, albeit with the ‘monster of the week’ format thankfully absent thus far (in the original run it took eight episodes to introduce Ami and ten to get to Rei – here this is done within three episodes).

But, now that we’re in 2014 that’s not really enough anymore. The magical girl genre has been exposed to the likes of Magical Girl Lyrical Nanoha, Selector Infected WIXOSS and the goliath that is Puella Magi Madoka Magica, meaning that Sailor Moon just doesn’t have much of a direct impact any more. Instead of competing with the big players, Sailor Moon has to some extent relegated itself to trying to win a new, younger audience, but this isn’t exactly a good idea as Pretty Cure has taken the market over with a much brighter, louder, faster style that leaves this series in the dust.

From the perspective of a fan of the series (as I have been for a long time now), whilst Crystal is still entertaining enough to watch it’s also actively disappointing. Early comments from producers and agents were that this would be a whole new series and not a remake but things have clearly changed, leading to what’s now a straight-up remake, albeit one that’s much closer to the pacing of the original manga. On this level it’s really disappointing as the live-action series already gave us a remake of this early part of the material which was then spun off into a new and more interesting direction, and it also means that other fan favourite characters (like my favourites Sailor Neptune and Sailor Saturn) won’t be making an appearance. There’s always the possibility of a surprise later on, but at present there’s no sign of any deviation from the original work. The new series also doesn’t take the opportunity to fix any of the issues from the original series aside from (thus far) the monster of the week format - Sailor Moon still has transformation and attack sequences far longer than those of the other characters, for example, and her attacks are yet again the only thing that seem to be able to deal with the bad guys, leaving the other characters as nothing more than people for her to talk to in terms of how much they affect the plot!

Visually the series comes off pretty well for the most part. It’s very much stylised towards the look of the manga, giving all the characters a very clean, bishoujo-style image which looks great (though it perhaps isn't the most realistic interpretation of how fourteen year-old girls look). Some of the backgrounds do suffer though, often appearing to be from a completely different series in terms of how they’re drawn, and the CG is certainly not much of a success and doesn’t do anything for the series that couldn’t have been better achieved using the same style used everywhere else.

Aside from Kotono Mitsuishi’s reprisal of her role of Usagi which is every bit as bad as it was before (it's shocking to realise that this is the same actress who gives such a great performance as Misato in Evangelion), the rest of the cast are new and all do solid jobs, even though thus far they haven’t really been given anything to allow them to do much more than tread the same ground already covered by their predecessors. The opening and ending theme songs by Momoiro Clover Z are passable but forgettable J-Pop numbers - there's really nothing to say about them other than that.

Overall then, Sailor Moon Crystal is just a retread of the original material with a shiner coat of paint on it. There’s not much to actively dislike about the series, but similarly there’s nothing that’s going to leave you desperate to see the next episode either. If you can even remember to watch it that, is given the imbecilic decision to only air the series every other week.

It has to be said that the biggest issue with the series here in the UK is its availability. Whilst US viewers can get the series on Crunchyroll, here you’ll have to stick to Niconico, one of Japan's own streaming portals which generally suffers from abysmal loading and buffering issues which makes watching the series frustrating to say the least. In the end I would have to say that I would recommend watching the series, not necessarily for the quality or the story but because if you’ve never seen Sailor Moon before then this is a reasonable version of the original story and you really should make the effort to watch at least one version of the series. If you’re an old-school fan, then you can at least play spot the difference for a while and enjoy a version of the series that cuts out a lot of the filler before you go dig out the 200-odd episode original.

You can watch Sailor Moon Crystal in streaming form on Niconico.

6
Sadly, this remake thus far won't live up to your expectations.
COMMENT AND DISCUSS
blog comments powered by Disqus