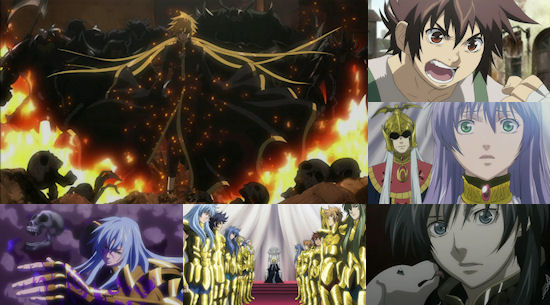 Although you may be more familiar with it under its English title of Knights of the Zodiac, Saint Seiya is a classic franchise with an enduring popularity, from its manga run in Shounen Jump throughout the late 80s and its anime adaptation which ran on the Cartoon Network under that aforementioned name after debuting in Japan within a similar timeframe.  Since then, the Saint Seiya story has continued under numerous OVAs, novels and spin-offs, and it's the latest of these spin-offs which is currently enjoying an on-going OVA release which is receiving a streaming treatment from Crunchyroll.

The Lost Canvas actually serves as a prequel to the original Saint Seiya series, but thankfully there's no real assumption of any prior knowledge of the franchise as the opening episode serves up a rather bombastic description of the key tenets of this mythological fantasy story, centring around the epic battle between Hades and Athena and their assembled forces which inevitably occurs without fail every two hundred years.

From here, we're introduced to 18th century Europe and a pair of orphaned friends whose characteristics are chalk and cheese.  On the one hand we have Alone, a quiet and friendly boy with a love of painting, and on the other there's Tenma, a precocious lad whose first and only reliance tends to be upon his own physical strength.  The pair is bonded not just by their friendship but also by Alone's sister, Sasha - a triangle which becomes pivotal to the series to come.

The scene for The Lost Canvas' premise is set via a couple of major plot points - first, Alone's search for a particular colour for his artwork leads him into the clutches of Pandora, who sows the seed for his body to be used as a vessel for the rebirth of Hades, while that very same day Tenma is discovered by one of Athena's Gold Saints, Libra Dohko, at which point he's signed up for training to become a powerful Saint himself - a journey that allows him to be reunited with Sasha, who has since been "reborn" as the goddess Athena herself.

Of course, all of this really serves as a lead in to the series main course - a jump forward in time by two years and subsequently the emergence of a new Holy War between Hades and his army of immortal Specters (not to be confused with Phil Spector) as they look to destroy Athena and her own Saints as a pre-cursor to immersing the entire planet in the "soothing silence" of death.  Cue lots of typical shounen-style battles as the war begins between the powerful Gold Saints as represented by signs of the zodiac and the more impressive Specters as defined by... well, lots of black armour and moodiness, mostly.

It's at this juncture where The Lost Canvas becomes both somewhat enjoyable and unintentionally funny - we're all used to the typical shots of a show's heroes and villains shouting attack names out at the top of their lungs, but when those attack names include "Deep Fragrance" and "Great Horn" it's hard not to snigger a bit at the daftness of it all, especially when you have a Gold Saint who fights by flinging roses around on-screen at the same time.  The fact that the series keeps a straight face and takes the whole thing completely seriously only serves to make it funnier somehow.

Away from the action (which does take a turn for the better towards the end of these episodes), the series does a reasonably good job of ramping up the tension between Alone/Hades, Tenma and Sasha/Athena and their current situations, even if this comes via some pretty predictable plot progression.  The overall feel of the first half of the series and the way it goes about its business is very much that of the Saturday morning cartoon - it's all a bit silly and packed with cliché, but that doesn't stop it being quite entertaining at times.  Heck, even the show's all-English language opening theme is redolent of the kind of stuff you used to watch as a kid.  The only place where the show really loses its "children's cartoon" is in its portrayal of violence, which offers up blood aplenty and pulls no punches with more deaths than you'd ever expect to see from a show written for a younger audience.

Come the end of these first thirteen episodes, and what looks likely to be the half-way point of this OVA, what we're left with is a polished and well animated show with a wealth of well-known voice acting talent that certainly makes for an impressive series to simply sit down and watch, such is the care that has gone into its production.  Beyond that however, it's all a bit run of the mill really - fans of shounen fare, or those already familiar with the Saint Seiya franchise, will most likely enjoy it as a lavish serving of more of the same, but for a broader audience The Lost Canvas thus far is an occasionally enjoyable, sometimes fun and ultimately cheesy affair that can while away a few hours without really taxing either your brain or your need for superlatives to describe it.

6
A cheesy and occasionally unintentionally hilarious series that still manages to serve up some typical shounen entertainment in a slickly presented package.
COMMENT AND DISCUSS
blog comments powered by Disqus