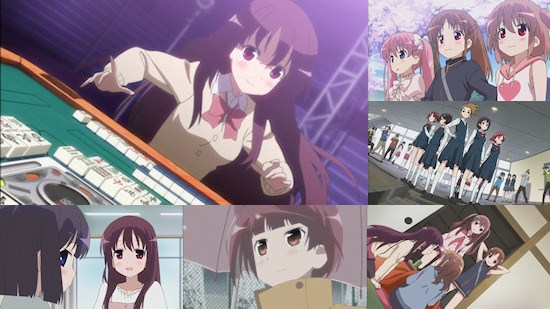 It was with a growing sense of surprise that I enjoyed the original series of Saki and its depiction of a Japan seemingly teeming with school girls with an infectious enthusiasm for the game of mahjong.  That enthusiasm was certainly catching - by the time the series was out I ended up embarking upon playing the game a little myself, and with the show ending on the cusp of seeing its titular characters take on the best of the best at Japan's national high school mahjong tournament, we seemed all geared up for a second season.

Sadly, what we have here a few years later isn't that second season, but rather a side-story to the original series written by the same author as the original manga, but with character designs courtesy of Bamboo Blade's manga artist.  Still, given that it's set very much in the same universe as Saki itself, it was hard not to get at least a little excited at the prospect of more of the joys which Saki itself brought our way.

Despite not dealing directly with Kiyosumi High School as per the original series, it's one of the original show's characters that becomes the centre point of Episode of Side A's story, as we meet a young Nodoka Haramura as she starts out at a new middle school after her parents move to the area.  It's here that she meets a pair of girls, Shizuno and Ako, with whom she quickly strikes up a friendship, largely on account of their shared interest in mahjong.  Facilitating this interest is the Achiga High School mahjong club, which is not so much an official club as an informal gathering of local girls who enjoy the game presided over by the school's one-time mahjong genius Harue Akado; a woman who has sworn off playing the game after a particularly distressing defeat in a key match.

Of course, as time goes on times change - while Harue moves on from her avoidance of playing mahjong to find herself hired to play for a corporate team, so Nodoka is forced to move on again as her parents up sticks once more, and ultimately Achiga High's mahjong room is left deserted and empty as Shizuno loses interest in playing the game.  At least, this is the case until she sees Nodoka on television as the winner of an inter-school tournament - a sudden, shocking revelation that leaves her swearing that she's going to meet Nodoka again in the most challenging manner possible, as rivals in the national high school mahjong championships in Tokyo.  It's more interesting than just dropping her an e-mail, I suppose.

With this setup in place, Episode of Side A wastes absolutely no time in racing onwards towards rebuilding Achiga's mahjong club and seeding it with a suitably talented quintet of members, once again under the stewardship of Harue as she seeks to slay her own personal demons.  Although some series might make a big fuss about recruiting its members, there's very much an "eyes on the prize" attitude to this show - an attitude which is to be commended during these very early stages of the series, but which soon come back to haunt it.

Once Achiga's mahjong team is in place, you'd normally expect plenty of time to be devoted to their attempted qualification to the national championship, particularly given that its opening episodes build a picture of an intense rivalry against another local school, Bansei, against which they are massive underdogs.  With that in mind, I was on the edge of my seat as the qualifying tournament began with Achiga and Bansei immediately drawn against one another.... only to sit back in my seat just two minutes later, with the game over and the winner declared.  The next thing we know the entire qualification tournament is over, with hardly a single mahjong tile slammed against the table in dramatic fashion from a viewer's perspective.  To call this treatment of such a hyped part of Achiga's progression "underwhelming" is to put it very lightly indeed.

Sadly, even as we reach the fourth episode we see exactly the same issue occur - on this occasion the opening match of the national tournament is at least afforded a few minutes of game-time as Kuro struts her stuff, but the rest of the match is then given short shrift as we're simply informed of the winner while the series wanders off to check on what other characters and players within the tournament are up to; fare which is, quite honestly, rather dull.

I'd be the first to admit that Saki in its original form occasionally dragged things out a little too long, but unfortunately Episode of Side A goes to the other extreme with its brevity, covering what took the original series twenty-five episodes in three instalments.  In turn, and by ignoring most of the actual games of mahjong taking place to concentrate on the show's characters, the series is drained entirely of any drama, tension and excitement, replaced instead by fluff and largely unimportant stuff that could have been outlined in a far more concise fashion.

This might not be so bad if the show's characters were memorable and filled with personality, but to be blunt - they aren't.  Achiga School's team are pretty much cardboard cut-out friendly school girls with only half-baked traits and admittedly nice character designs to tell them apart by, and there isn't much to say about any of the supporting cast either beyond those we already know from the original series as they make a welcome return to the Saki fold.  Again, this feels like a huge mis-step by Episode of Side A so far, as it seems to have missed the point - that it was the way the characters played mahjong that defined them in Saki, and without seeing anyone engaged in mahjong to any great degree here we're left knowing, or feeling, nothing for them.

With only twelve episodes to cover its story, and a lot of mahjong still left to be played, it seems hopeful that the rapid clip we've seen from Episode of Side A will slow down substantially and finally allow us to luxuriate in all of the organic excitement and tension that comes from the must-win nature of the tournament at its centrepiece - if it does so, then this follow-up could make a late charge for the hearts of those who loved Saki with abandon when it aired.  For now though, it's a pale imitation which lacks all of the heart, charm and fun that characterised the original show.

You can currently watch Saki: Episode of Side A in streaming form right here at the UK Anime Network!

5
A thoroughly mediocre offering, which has so far eschewed almost every element that made its predecessor such a thoroughly enjoyable series.
LATEST REVIEWS