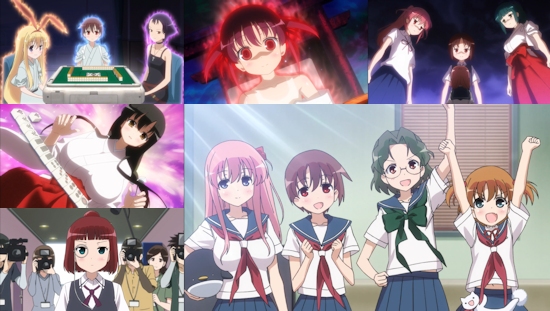 After a slow start that left us cold for the most part, the second half of 2009's anime adaptation of mahjong manga Saki turned things around to leave us delighted by its intense sporting drama and sense of the theatrical, which in turn had us gasping for more. Its been a long journey since that point - original production studio on the series GONZO all-but faded out of existence halfway through Saki's original broadcast run, and it was only last year that the franchise returned to the fore courtesy of side-story Episode of Side-A and a new studio, Gokumi, at its helm. It's take almost five years for us to return to the show's mainline story, which left us dangling at the cusp of its national tournament, but that moment is finally here - was it worth the wait?

There really isn't too much to say about the main thrust of The Nationals' plot as it's inherent within the show's title - after qualifying for the national tournament, the series chronicles the girls of Kiyosumi High School as they seek to make a mark on the competition, which means facing off against some of the world's best young mahjong players as a result. At the centre of the tale is our titular character Saki Miyanaga, who is competing in the hope of meeting and rekindling her relationship with sister Teru, herself a fearsome "monster" at the mahjong table.

The term "monster" isn't one we use lightly either, as Saki is no ordinary tale of girls playing this gentle tile game. Instead, the show is littered with users of supernatural powers, many of which are ramped up to ridiculous levels now that we've reached the national tournament - we're now at a stage where characters are *literally* calling upon gods to help them play mahjong or teleporting into the arena on a whim! The potential for such overbearing powers breaking the balance of games is largely mitigated by every girl having some similarly terrifying ability or other to retain some level of tension within matches (of which there are few) covered by this series, although sadly those attempts to ramp up the drama and excitement to the levels of previous iterations of Saki are undermined for other reasons.

The biggest issue that runs throughout The Nationals is that it understandably wants to offset its actual games of mahjong with opportunities to dive into the back stories of its ever-growing roster of characters - a noble goal in itself, but unfortunately far too often these flashbacks abruptly interrupt moments when tension is building within a match, thus killing the momentum of an episode and leaving it trying to ramp back up again, which is rarely has time to do. To makes things worse, many of these flashbacks are pointless - the viewer can quite easily construe that a group of girls who spend all their time together playing mahjong are friends, we don't need to have this painfully obvious fact pointed out to us by some dry scenes showing them becoming buddies!

This, coupled with other elements that feel like a waste of time in the grand scheme of the show's narrative (how long do characters need to spend in the bath?!) slow it to a plod far too frequently, draining the action of tension and excitement to the point where even the climax of the big match that takes up virtually the entire series ends with a whimper rather than a bang. This relegates The Nationals to a few very occasional edge of the seat moments which remind you of what Saki is truly capable of - for example, the emergence of the titular character's signature move gets the adrenaline pumping, only for the end of an episode to cut it short. Although these issues don't ruin The Nationals, they do dampen our enthusiasm for it and undermine its best work considerably, to make what should have been a triumph return feel a little like the weakest outing of Saki in animated form thus far - something that it can hopefully rectify in future, as it seems poised to continue its tale further, even if we have to wait another five years for it!

One area where Saki does continue to be successful is in its visual treatment of the show - yes, it indulges in some gravity-defying clothing and improbable breast movements (the former of which occasionally feels a little lazy), but there's no denying that it adds some real energy and passion to the otherwise mundane selecting, discarding and flipping of tiles that make up a game of mahjong. Rather than playing this straight, winds swirl and electricity crackles around the tiles as they're tossed around with theatrical gusto, accompanied more often than not by suitably stirring music to denote the importance of what's occurring. Even if you aren't entirely au fait with the intricacies of the game itself, this serves as a great visual guide as to when something important is happening and exactly how important it is, and these flourishes only amp up further once those supernatural elements come into play to drive home what's going on quite wonderfully.

The series is also a treat for fans of Japanese voice actresses, as the show's massive cast allows for appearances by almost every actress you could think of, however briefly. If nothing else, "guess the voice" becomes an entertaining game in its own right for a group of viewers to play! The show's subtitles as provided by Crunchyroll are solid - some translation notes for mahjong terms might have been nice, although at this point it seems to be assumed that you know enough about the game's rules and language to figure it out without any additional help, especially given that the original series of Saki did most of the heavy lifting in terms of explaining things along those lines.

If you're a long-standing fan of Saki then you'll undoubtedly have been happy to see more of it appear in animated form, but taking a step back from any love we have for the franchise it has to be said that The Nationals is largely a disappointment that spreads its exciting moments too thinly and frequently shifts its focus to all the wrong places, in turn losing much of what made the original series (and particularly its latter half) seem so special. In this sense, even Episode of Side-A had a better sense of what makes the show's formula successful, whereas The Nationals leaves us scrambling to find the moments that rekindle that success in a mass of needless distractions and flashbacks. If you're not a dyed in the wool fan of the show, this is probably best avoided, in all honesty.

You can currently watch Saki - The Nationals in streaming form on Crunchyroll.

6
The old Saki magic is here, but not in a strong enough concentration to be satisfying as too many other distractions within its narrative take their toll.
COMMENT AND DISCUSS
blog comments powered by Disqus