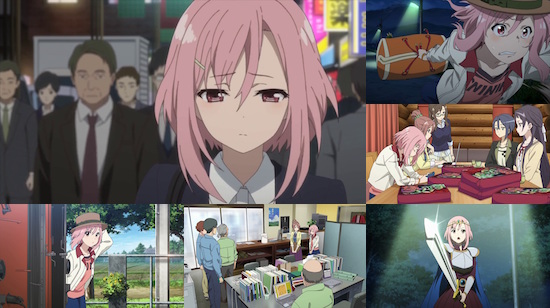 P.A.Works. Ahhh, P.A.Works. That name alone provokes fond memories for some of our favourite anime series. UK Anime Network favourites, such as Shirobako and A Lull in the Sea spring immediately to mind when thinking of the studio. So, Sakura Quest has a lot to live up to to stand with that crowd. However, it’s not all good as P.A.Works has also been responsible for some not so stellar works. By way of example: I think Professor Layton and the Eternal Diva may well rank as 99 of the most tedious minutes of my life, Purple cats aside. (And don't forget Glasslip! - Ed.)

As Sakura Quest begins, our main character Yoshino Koharu is about to graduate from university and is determined to find paid employment before she does. Those of us over a certain age will have all been in a similar situation I’m sure. Whether it’s fresh out of education or in-between jobs, that desperate search for a job, any job, is familiar to many. Yoshino also dreams of being a Queen, spurred on by a half-remembered event from childhood, but finds reality to be a harsh mistress: So far she has applied to thirty companies, and has struck out each and every time. With only ¥908 (about £6.20) to her name she needs paid employment to be able to support her beloved big city life in Tokyo, and really doesn’t want to have to return home to the country, though that doesn’t stop her mother from asking. It is at this point which fate steps in, as a call out of the blue comes with a job offer. It is a timely offer from a promotions agency Yoshino did some modelling work for a while back, and because she desperately needs the money she jumps at the chance of another modelling job without digging too deeply into the details...

It is in this chance job offer that the basis of the series’ story lies, and Yoshino gets a lot more than she bargained for. It turns out that the job offer wasn’t actually for Yoshino, but was in-fact intended for a former pop idol from years ago who has a similar name. Luckily for Yoshino her new employers agree to offer her the job anyway, after it transpires that the pop idol in question had passed away eight years prior, and seeing as Yoshino had already signed the contract she lands the gig.

That’s not the last surprise for poor Yoshino either, as it transpires that it isn’t a simple modelling job after all. No, no. It’s nothing like that. Get your mind out of the gutter. Her new employers are the Manoyama Tourist board, and they are expecting her to work a whole year as their “Queen” to aid in bringing tourists back to the town after years of decline. After a series of unfortunate events (not a Lemony Snicket reference, there’s no Count Olaf at work here - at least not yet) Yoshino cuts a deal where she aggress to sell a thousand boxes of Manjū within a week in return for the Tourist Board cancelling her contract, thus allowing her to return to her beloved Tokyo.

From there the series begins introducing its other characters and expanding on the seemingly sleepy town of Manoyama, as Yoshino explores and even tries to escape her new role. There’s the sweet and kindly Shiori Shinomiya who also works for the Manoyama Tourist board and really wants Yoshino to stay; amateur actress Maki Midorikawa, who's bit-part in a popular TV series has made her something of an unwilling local celebrity; Ririko Oribe, the occult obsessed daughter of a local sweetshop owner; and web entrepreneur Sanae Kōzuki, who appears to have been a bit of a shut-in until Yoshino and Shiori’s intervention. Outside of the core five there are interesting characters galore in the sleepy town of Manoyama, especially those within the Tourist Board itself.

This being a P.A.Works series I doubt I have to say this, but the animation and attention to detail in this series are sublime. All the characters are highly individual, fit their personas perfectly, and are superbly realised. The sound track is perhaps best described as fun but unobtrusive. Nothing particularly stands out, but nor does it get in the way, it just sits there subtly enhancing the onscreen events.

I myself am someone who escaped the country to take up life in a city, and I wouldn’t want to go back either. Therefore I can really relate to Yoshino’s initial struggles to stay in Tokyo as well as her reactions to having a year long contract imposed on her which requires she stay in a small country town, not unlike the one she thought she had left behind. This provides the series with even greater impact than it may otherwise have. Yoshino’s situation and reactions ring true and thus feel really grounded in ways which anime series often struggle with. This conflict between what Yoshino wants and where events are taking her provides much of the series’ early drama and comedy, and there is plenty of both in these opening episodes.

It is difficult to gauge a series like Sakura Quest at this stage, as I strongly suspect it will be largely character driven and three episodes isn’t long to introduce and flesh out those characters. However, what is clear so far is that this series to date is a perfect mixture of comedy and drama delivered by a cast which shows a great deal of promise. I find myself wanting to know more about the town, and to follow Yoshino and co’s ups and downs over her year as “Queen”. We can only hope that the rest of the series lives up to the promise of these opening episodes.

You can currently watch Sakura Quest in streaming form on Crunchyroll.

9
A promising start for a heartfelt, funny and intriguing series.
COMMENT AND DISCUSS
blog comments powered by Disqus