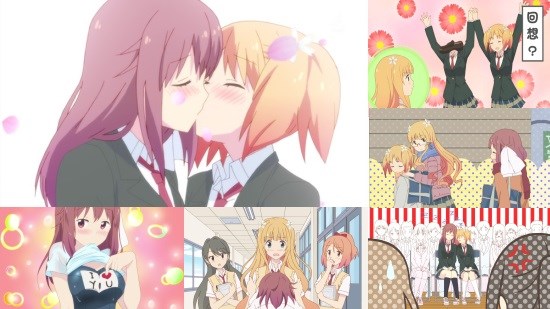 Yuri fans tend not to be well served when it comes to anime and manga that make it over to the west. For some reason, whilst the market for Boys' Love titles has become a larger genre within the industry, distributors just aren’t as willing to take a punt on a yuri title, although it also has to be said that this applies to the anime industry as a whole. Take a walk around a Japanese manga store and there’s always a packed yuri section but only a handful are ever picked up for the anime treatment. Regardless of the reasons for this there’s finally some good news for yuri fans in the UK, as Sakura Trick has hit the UK from MVM Entertainment.

As plots go things couldn’t be simpler. School friends Haruka and Yu are headed to high school, both worried that they might not be in the same class and worried that they might not make friends with their new classmates. Fortunately the two are placed in the same class alongside a set of slightly oddball girls (and some boys, but they basically only exist as set dressing in this show). After class, when Haruka has become upset that Yu’s attention is being split amongst their new friends, Yu suggests they do something they would never do with the others and for whatever reason Haruka suggests... a kiss.

Whilst that’s just the set-up to the first half of the first episode that really is kind of the whole series in a nutshell. The show is split up into twelve episodes, each comprising of two half-length stories and in basically every single one the plot is either that two of the girls kiss in the end or they’re trying to hide their kissing from someone else, normally with hilarious consequences (Yu’s older sister even ends up falling in love with Haruka after catching the girls in the act, for example). There are also all the usual slice of life plots here, from tests of courage to school festivals to pool episodes. If you’re looking for the kind of high-end drama you’d get from the cream of the yuri crop like Maria-sama ga Miteru or Strawberry Panic then you’ve come to the wrong place as the show is all about good-natured humour followed (or preceded) by two cute girls kissing.

The odd thing is that whilst everything about the show sort of screams that it should be average or even bad with some cheap fan service chucked in... it works. The characters are all fun, the jokes barely ever falter and even the kissing ends up just being part of the scenery. It all works so well that you never question the odder parts of the show (like how all the school's lesbians seem to have managed to end up in the same class, or how it’s at all possible that so many people don’t seem to realise what Haruka and Yu are up to despite how they act around each other) just seem to fade into the background.

Studio Deen have done a surprisingly good job with the visuals here too with a variety of visual tricks that strongly remind you of shows like Hidamari Sketch and Azumanga Daioh, with crazy background textures or characters sometimes being reduced to a talking hair ornament (or an orange with hair). The whole thing works though and it fits in really well with the tone of the series and the cute character designs complement things too.

So, yeah... that’s Sakura Trick then. It’s one of those shows that’s unfortunately problematic to discuss in text form as, whilst it is a good show and the score below is reflective of that quality, it’s so paper thin that there’s nothing that you can really spend any time talking about. It’s not fan-servicy enough to talk about any kind of eroticism, not dramatic enough to discuss any big issues about love triangles and not quite off-the-wall enough to really dig into the gags in any kind of meaningful way. At the end of the day this is a good, fun, light-hearted show that you’ll enjoy watching and then put on your shelf and forget about it until you get the sudden urge to watch it again.

7
Who needs ice to be yuri?