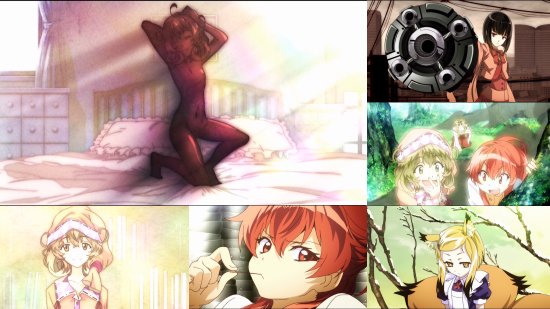 Responsibility is a royal pain to manage once you have it. When you are responsible you don’t get time off, you rarely get time to rest and every decision and changes in your emotional state could destroy the world and every living thing within it. Okay, so maybe not that last bit, at least for most of us. But what if you were the human embodiment of a god capable of that ultimate power? An ability that unconsciously means that all of the lower divinity gods of the world actively adjust and alter the world to suit your merest whim, even if you didn’t mean to? Imagine if you were fated to bear this brunt from a young age; if it was your fate.

As much as I would probably enjoy seeing my fantasies made manifest, the sheer weight of that responsibility would likely crush my own fragile soul in no time flat. Just imagine what would happen if you have a particularly bad day? Wow.

Now you can understand why Sasami Tsukuyomi, the youngest girl of a long line of priestesses who within them hold the power of Amaterasu, the Japanese Sun God, has become a withdrawn agoraphobic soul spending her life in front of her many computers. Her only real access to the world outside, other than the big fat Internet pipe, is her brother. To describe her brother as a highly perverse sister fetishist would be putting it mildly, and I frankly expect his face, if you could ever actually see it behind the various masks he wears (briefcase, fan, cat, hat and other three lettered objects), to be a lecherous one similar to that infamous Woody (of Toy Story fame) Figma. There are certainly special words to use when someone wishes their sister was made of chocolate so they could lick her.

Oh... wait... Sasami turned into chocolate. Who has the power of god and the ability to change the universe again?

It turns out that the ownership of said powers are actually beyond complicated, and in fact get more complex when the three Yagami sisters become involved in Sasami’s life. Tama, a new god who has the ability to devour the old and combines ludicrous strength with the mind of a child; Kagami, a spiritual war robot; and Tsurugi, who actually is Amaterasu, are the three previously unknown protectors of Sasami. Their job is simple: they are to stop the world from being altered and to maintain control over the other gods of the world who are trying to pander to the power of Amaterasu.

The whole situation of a human being having the power of creation wouldn’t have normally been a problem, but because Tsurugi wanted to skive, take time off, chillax and generally sleep, she “delegated” her powers to Sasami’s ancestors. To help her with the monitoring of these powers, she created Tama and Kagami, and now these two beauties do the remaining hard work, as she relaxes.

Sasami-san@Ganbaranai suddenly seems like it is a series about people basically trying to not actually do anything. However it is a lot more peculiar than that. What follows is an almost deranged passage through altered space as Amaterasu’s powers are abused, stolen, transferred, twisted, stolen again, and finally circumvented by various priestesses / zombies / demons and lolita fox-spirits, all while Sasami maintains her usual combination of sarcastic bemusement.

I love this show, and it has been quite a long time since I had first seen it. Frankly, it has aged very well. It is also, as I have discovered, another SHAFT produced series, meaning that not only is the art direction substantially better than it was during the Japanese broadcast, but also the director also decided to multiply the amount of head tilting by a factor of infinity. However in doing this they also made the series very pretty, which is a nice bonus.

If you are after an English dub, which admittedly would have been rather interesting, you're out of luck here, as Sasami-san has proven itself to be too niche to produce a dub. This is not a problem actually, as I don’t think an English actor could provide the sheee lack of energy and pessimism that is required for a role on this series. I am not sure that even the most depressive and downbeat US voice actor could give the same tired energy as Kagami’s actor (I dunno, have you heard some of Sentai Filmworks' dubs lately? - Ed). In this case, the Japanese voices actually fit the characters flawlessly - even Sasami’s mother, an otherwise strict individual, works perfectly when fit with a voice that goes from stern and severe, to cute, fluffy and embarrassed with only a moment’s notice. Now that’s acting.

I have rather enjoyed my days with Sasami-san@Ganbaranai. In the space of twelve episodes she goes from a cursed and scared individual and grows into someone who is able to have friends, leave the house, have fun and battle evil gods in a bid to save the planet, while at the same time retain her personality that can be summed up in three wonderful words. Cannot. Be. Arsed.

I love this show.

8
Remember kids, never delegate your responsibilities to others. Bad things happen if you do!
COMMENT AND DISCUSS
blog comments powered by Disqus