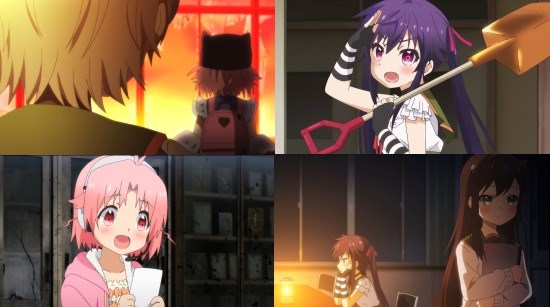 The opening episodes of School-Live! are probably some of the best directed episodes of anime that we've seen produced in quite a while with their incredible pacing and tone. But lots of anime start off great (in fact most of them do as the time and budget afforded a show tends to be heavily front-loaded), but now that the series has reached its conclusion it’s time to assess whether the series manages to live up to the big expectations it set itself up with.

After the shocking, zombie-fuelled twist of the first episode, you’d be forgiven for thinking that School-Live had shot its bolt and that things would be more straight-forward from now on... but you’d be wrong. Rather than rest on its laurels the show instead charges forward with a set of exquisitely timed and paced reveals and tense action, as the surviving girls keep working to survive in their terrible new world whilst also trying to keep up pretences to ensure that the damaged Yuki can cling onto the last vestiges of her sanity that her delusions allow her. The upshot of this is a delicate balance across the series between the gradual uncovering of the show's dark secrets (such as just why a simple school has such an insanely good self-sufficient infrastructure) and the more mundane slice of life events (pool episode – check!)

Cleverly, both aspects of the series really help to draw you in, using the more standard school events to build layers of characterisation that then helps to twist the audience's feelings in just the right way once things start to go wrong and the undead rear their ugly heads.  Episodes 10 and 11 in particular are an utter masterclass of this, taking every bit of characterisation and the feelings the audience has built for these characters and using it ruthlessly to leave you constantly on the edge of your seat on tenterhooks; waiting, fearing, and desperately hoping that there could maybe be some way out that will allow Yuki and friends to make it through unscathed...

This being said, there are a few bum notes here and there in the series – the use of shadow to sanitise the undead does start to feel a little over-used after a while and whilst full-on Romero-style horror wouldn’t be a good fit you feel like something else could have taken the series to even higher heights. There are also a few story issues as some threads feel a little underdeveloped (partially no doubt due to the ongoing manga series), which also leaves the series finale feeling a bit drawn out and functioning mostly as an epilogue with some set-up for an as-of-yet unannounced sequel.

Elsewhere however everything is fantastic. The opening credits (with the brilliantly catchy theme song) are a great example of this, as the content of the animation subtly changes across the series as the characters and audience become more aware of what’s going on. The animation remains very solid throughout as well and does the best job it could have done of tying together a show comprised of such contrasting genres.

School-Live is a series that is definitely worth you investing your time into if the opening episodes managed to grab your attention, and its ended up staying right at the top of the pile of shows from the summer season, arguably rivalling the likes of Gatchaman Crowds Insight for the top spot. Hopefully the series will be granted a second season to keep the story going, though at least if it doesn’t the manga has been licensed and will be available soon. In short, this is an exceptionally well put together show that really manages to break all your expectations of what it’s going to be.

9
Highschool of the Dead and Azumanga Daioh had a baby - and it's beautiful!