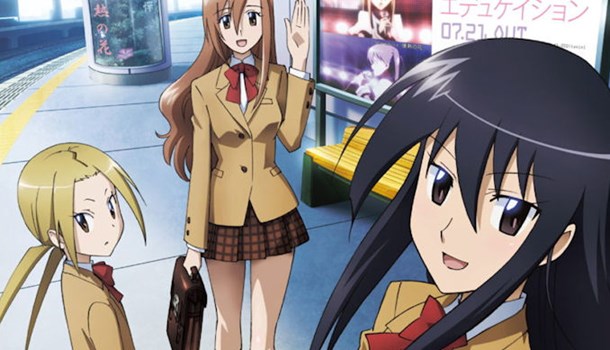 Sometimes all an anime needs to be good is a few engaging characters and a variety of amusing situations to put them in – just look at Love, Chunibyo & Other Delusions, a series which charms simply by following the day-to-day shenanigans of a bunch of eccentric teens. This is what the slice-of-life comedy Seitokai Yakuindomo tries and ultimately fails to do.

The five-disc collection – made up of 26 episodes and a feature film – begins with freshman Takatoshi Tsuda enrolling at his nearest academy, unaware of the fact that it’s a former all-girls school recently turned co-ed. In an effort to represent their 28 new male peers, the student council elects Tsuda as its vice president, wherein he serves as the straight man in a series of lewd comedy sketches.

Seitokai Yakuindomo is at its funniest when parodying other anime series, recreating popular tropes like the toast of tardiness by switching between art styles and tones. In one scene, Tsuda is visited by a colourful “anime girl” with large(r) eyes, and another adopts the detailed postcard memories stills commonly used in sports anime for an over-the-top judo match. If the series played to its strengths and focused on playfully addressing clichés like these, it would make for a much more entertaining watch.

Instead, these occasional moments of genuinely good humour are watered down by a deluge of sexual innuendos that grow increasingly tiresome after each episode. Every few minutes there’s an irritating chibi cutaway or a noisy slapstick punchline – it seems that, while quick to poke fun at other genres, SYD fails to avoid the common pitfalls of its own. The quality of the gags only deteriorates once the second season comes around, and the remainder of the series – movie included – turns into a test of how many penis jokes one person can endure before being driven insane.

There is some semblance of a passable anime buried beneath this mountain of unoriginality. The production values are fairly high, and the characters would probably be likeable if they were allowed to do anything other than quip at each other. (Tsuda is at least relatable in that he constantly appears to be fed up with his role in the show.) Alas, it seems that when adapting the series from its origins as a bite-size comic strip, the writers forgot to pad it out with anything of actual substance.

All in all, there’s no denying that SYD is a sufficiently well-made series from an aesthetic perspective, but it just isn’t funny enough to be worth your time or money unless you’re really into this specific brand of comedy. Class dismissed.

2
An exhaustingly unfunny series tied up in a neat bow