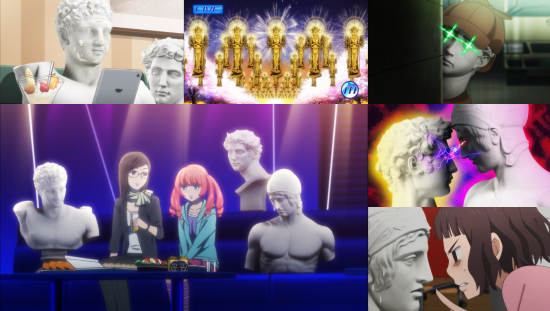 If you've spent any time at all following the idol craze (as it pertains to anime or otherwise), at some point you may well have been struck with a cynical train of thought about how ludicrous the whole thing is - a manufactured group polished to a perfect shine to create the personalities that the audience wants to see, frequently one suspects leaving little to no trace of the genuine individuals that live an everyday life behind their mask of celebrity.

Follow that train of thought to its logical conclusion, and you may be tempted to suggest that the promoters involved in marketing idol groups might as well cart around a bunch of statues instead - they'd be lower maintenance, less likely to do something deemed "impure" by their more rabid fans, and so on. Well... welcome to the world of Sekko Boys, which follows a new all-male idol group - and by all-male, I mean they consist of four plaster busts of historical gods and legends.

Yes, you read that right, Sekko Boys is the story of a new idol group manager named Miki Ishimoto (who ironically quit a career at an art school as she hated lugging busts around) who finds herself signed up to look after the "Rockies" as they affectionally become known, four busts representing Saint Giorgio, Medici, Hermes and Mars. Of course, the four aren't just statues - they can talk as well, but that's apparently the norm in the world of Sekko Boys... in fact, it's not even that high on the scale of oddness that the show inhabits.

What follows is a short comedy series, with episodes running around the seven minute mark. It has to be said that the show doesn't particularly get off to a good start - it spends a little too long trying to hammer home its core conceit when the joke works and is immediately obvious, and there isn't quite enough to the show's characters to justify the time spent on setting up their world.

However, once the series feels satisfied that it's done with world-building, its comedy takes off quite markedly and starts to hit the mark on a regular basis - it finds amusing situations to put the "Rockies" in that plays into their roles as both idols and busts, and also uses the incongruity of these static, armless characters who can't even move themselves sat around eating at restaurants and using iPads to offer some enjoyable visual comedy.

It's this ability to shrug off its absurdities while still winking at the viewer self-knowingly about those same absurdities that makes Sekko Boys tick - while the group are often the centrepiece for whatever is going on, they're just as frequently simply a cipher for something even more ridiculous that's going on around them. These windows into a crazy world are the smartest thing that the series does, because they're ridiculous occurrences that also exist in our own entertainment industry, be it chat shows, novelty pop acts or paparazzi.

That isn't to say that this is a series with an explicit thread of socio-political commentary running through - sometimes the truths that it stumbles upon feel accidental, and even at its core it's hard to figure out whether Sekko Boys is really lampooning the idol business or simply having a lot of fun with a silly idea. This actually works in the show's favour, to be quite honest - this isn't a series you'll feel the need to think about in any detail as you can simply enjoy it as a slice of light-hearted entertainment, but if you do feel the need to consider it a little further then there's certainly another layer to be discovered beneath the surface.

Given that they're entirely static, it's left to the voice acting cast for our four busts to sell themselves, and boy do they do a great job at that, bringing lots of character and expression to these inanimate objects which have neither. Animation-wise there isn't a lot to talk about as you might imagine, but as we just mentioned there's much fun to be had with dumping the Rockies into scenes in a suitably amusing fashion.

While I can't shout from the rafters about Sekko Boys as a great comedy show as I might, say, Teekyu (yes, I had to mention it somewhere in this review), it is still very much an enjoyable one with a number of great moments and an overall sense of the absurd that very much works in its favour when coupled with the presentation of its topsy-turvy world. It's also a series that you could choose to interpret as having a lot to say about idols, media and entertainment, but that isn't crucial to getting laughs out of watching four statues get by in the idol business.

You can currently watch Sekko Boys in streaming form on Crunchyroll.

7
After a slow start, there's a lot of fun to be found in this absurd short comedy - and perhaps a little social commentary into the bargain.
COMMENT AND DISCUSS
blog comments powered by Disqus