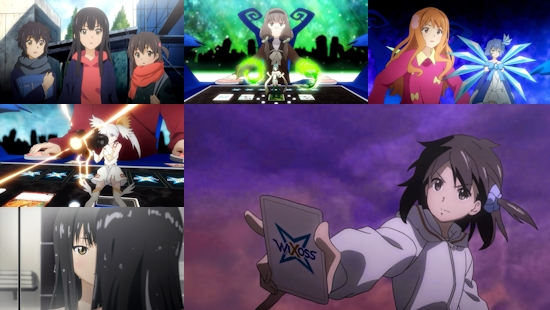 If we were to mention to you the phrase "card game tie-in anime", you'd probably find yourself thinking of something like Yu-Gi-Oh or Cardfight Vanguard - decent enough shows, but not exactly ground-breaking or highly emotional in their content. Indeed, you wouldn't necessarily expect a tie-in show to be anything other than sunshine and lollipops when it comes to serving as a marketing tool - however, if you go into Selector Infected WIXOSS with that kind of expectation, prepare to be surprised.

Like so many series, this original anime begins with an ordinary girl - Ruko lives with her grandmother rather than her parents but she's otherwise an ordinary kid with an ordinary life, albeit a slightly lonely one as a girl who finds it difficult to make friends. All this might just change when she finds herself introduced to WIXOSS, a hot new card battle game that all the cool kids love to play incessantly (we did mention the card game tie-in, didn't we?) - not only is Ruko provided with a WIXOSS set (pronounced wi-cross, if you're wondering), but she find herself in the enviable position of receiving a special card that marks her out as a so-called "Selector".

This special card isn't just some foil-backed affair however - the card in question, known as an LRIG, contains a living, sentient girl that will do battle for her if she chooses to pit herself against other Selectors. Rumour has it that if a Selector defeats enough of her peers, she becomes an "Eternal Girl", and will be granted any one wish that she desires. If all of this sounds great, it's all a little baffling for Ruko - she doesn't have any wishes to speak of, and really doesn't understand why the prospect is such an allure to others.

This is an issue which doesn't confront the other girls that Ruko soon comes into contact with when they discover that she's a Selector, and two of these girls quickly become good friends - Yuzuki is an energetic yet straightforward individual with a deep desire that she knows will never be realised without becoming an Eternal Girl, and Hitoe simply wants to make some friends and seems blind to the fact that she's done so without actually "winning" at WIXOSS. Alongside this pair are other girls who are far less friendly in their approach to the game at hand, and Ruko finds herself caught in the middle of friends and foes as her apathy about gaining whatever wish she desires is contrasted against her overwhelming joy and excitement when it comes to engaging in WIXOSS battles.

As you might guess there is a significant twist to this tale, and life as a Selector is neither as straightforward nor as rosy as it might sound, leaving the series free to explore this darker side to the story as things crash down around the ears of Ruko and her friends and make her wonder whether she should have anything more to do with the game at all. However, its allure just won't leave her alone, and with her LRIG Tama also always keen to do battle escaping from her role in events seems impossible.

Reading the above synopsis, you'd be forgiven for making comparisons to Puella Magi Madoka Magica - the temptation of taking part in a somewhat supernatural phenomenon with the reward of anything you might wish for is an obvious point of similarity, and Ruko's place as a blank slate closely matches that of Madoka herself in the aforementioned series. This is normally where we'd start listing reasons why this series isn't as good, but Selector Infected WIXOSS deserves better than that - it's smartly written, has a story that goes beyond any simple attempts to recreate Madoka Magica's success and has a presentational style that works in its favour.

By the end of the series, you find yourself closely entwined with the feelings of the main cast of characters, and the drama that spawns from them is palpable - even a potentially problematic story arc regarding one character's wish is treated in a heartfelt and broadly believable way, and the show's world is built so expertly that almost every aspect of its story fits together well from its human drama through to the broader strokes of what powers the world of Selectors. Even common pitfalls for this kind of series - questions such as "why don't these kids just ask their parents for help" - are avoided reasonably well to leave you with a real feeling that Ruko and her friends are trapped in a situation which they're ill-equipped to handle and have no easy way out of it, which adds even more power to its narrative.

Although the actual card battles themselves are mostly fleeting and glossed over (to the point where we have no idea how the game actually works), they do still provide a visually strong setting - gloomy but with flashes of colour to serve as an energetic stage for the more human elements of its drama and backed up by a punchy soundtrack. That gloom persists throughout the series for the most part, which may be a little too bland for some, but there's no doubt it fits the tone of the story at hand. Admittedly there are moments where the series does turn into a commercial for the card game whose name it boasts, and they feel jarring as a result, but thankfully such occasions are rare and soon taper off once the series pulls back the curtain on some of its most important aspects.

Having watched a number of series in recent years that could be unfavourably be referred to as "Madoka Magica rip-offs", Selector Infected WIXOSS is arguably the first series we've seen to rise above that label and stake a claim in its own right as a series well worth watching. Admittedly its legacy is still in question until the autumn and the return of the show for its second season, Selector Spread WIXOSS, which promises some seismic shifts in its story, but for now what we have here is a powerful story that is intelligently told and undoubtedly amongst the best that the spring season has had to offer.

Selector Infected WIXOSS is available to view on-demand for subscribers to ANIMAX UK.

8
A strong, well-told story that makes full use of its character drama and scenario to great effect, making for a series that rises above comparisons with other similar shows.
COMMENT AND DISCUSS
blog comments powered by Disqus