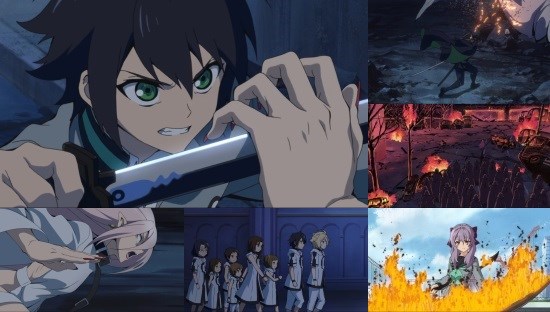 After a deadly virus reduces the worlds population, leaving behind only children, vampires emerge and take the survivors underground. Under the watch of the vampires, the children must give their blood at regular intervals in order to survive. Growing tired of this routine, Yuichiro along with his family of orphaned children attempt to escape the vampires clutches and head outside. However, Yuichiro is the only survivor who manages to escape. Upon seeing the outside world for the first time he encounters the Moon Demon company, who promise him the power he needs in order to avenge his family. The story then jumps forward four years later as we see Yuichiro's attempts to join the company and gain the power he needs.

For the most part, the first four episodes of Seraph of the End mainly deal with setting up the world and character motivations. In the first episode the viewer is shown what life is like under the vampires rule, and also used to establish protagonist Yuichiro's motivations for wanting to kill vampires. The formula in itself is a pretty standard one for an anime series - a character loses their family and was unable to do anything about it at the time, so they need power and work towards getting stronger in order to seek their revenge. This in turn leads to the biggest aspect of Yuichiro's character that is focused upon: his need for revenge and the importance of family to him.

From episode two onwards the series deals with putting Yuichiro in a high school setting in order to get him to open up more and interact with people. In this regard, the series feels very typical of most shonen anime of this kind, putting the protagonist in a new school/training environment in order to learn life lessons that go hand-in-hand with their combat training. Within these confines things feel rather cookie cutter and the events shown within these episodes feeling very familiar, especially to those who have watched shows like Attack on Titan and Blue Exorcist. While this is happening there is the briefest of introductions to the show's action and the weapons that are used to fight the vampires.

In order to fight the vampires, humans need to make contracts with demons that have taken possession of weapons. However, it is shown that those of a weak heart can be easily overtaken by the demon instead of being the one in control, and with this the series justifies the need for its high school environment and manages to show the subtlest of changes to Yuichiro's character. The other thing the series manages to do here is give glimpses of what is in store for the series - so far there have been a few action scenes, with humans fighting both vampires and giant monsters and showcasing some of this demonic power. This, in turn with other events transpiring in this set of episodes, show enough promise that things will step up a gear.

Although we've mentioned that things feel very familiar with regards to the presentation of Seraph of the End, this in no way a slight against the show itself. The formula it's adhering to is a tried and tested one that is able to quickly establish a setting and character. For what it is right now, it does feel a bit pedestrian, since this type of show has been seen before plenty of times - however, Seraph of the End manages to handle this aspect very competently to the point that it feels like it's sticking to this strict formula in order to get the mandatory housekeeping and plot establishment out of the way before it can swiftly move into the main aspect of the show.

For the first set of episodes then, this series has been a pretty enjoyable watch. The characters may feel a bit stereotypical at the moment but that may be due to the series mainly focusing on setting up the world, story and some of its concepts before it is able to give characters any chance for development. While things may feel very familiar with the concepts and set up with the inclusion of vampires and a post-apocalyptic setting, there is plenty of chances for the series to grow, and with this it also has plenty of opportunity to distinguish itself from other shows.

You can currently watch Seraph of the End -Vampire Reign- in streaming form on Viewster.

7
A competent start to a series that shows a lot of promise.